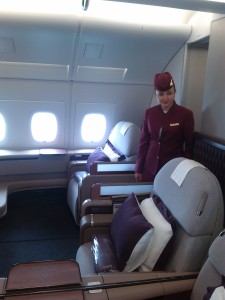 Qatar Airways’ first class section on the Airbus A380 includes very wide seats, with a warm set of colors in the airline’s grey-and-purple colors. Click on image to enlarge.

The photos from my cell phone hardly do it justice. The spaciousness of the A380 is greater than the Boeing 747. The first class seats are the widest I’d ever seen. These were little suites, not like the suites of some other airlines, but nice and private, to be sure. The IFE screens in first are a whopping 26 inches, the widest I’d seen on an airplane and bigger than some of my early TVs (which pretty well dates me). The colors were a mixture of Qatar’s grey and purple, providing a particularly warm environment. Take note of this when I come back to Air France. 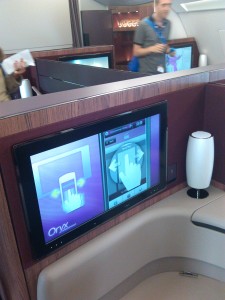 The IFE screen in the first class section of Qatar Airways’ A380 is a whopping 26 inches. It’s 17 inches in business and 11 inches in coach. Click on image to enlarge.

Moving on to Business Class (J Class), the warmth and spaciousness continued. The IFE screens were 17 inches, still much larger than I’ve been used to in J on Western airlines. Even Coach had a good-sized IFE screen, 11 inches. Qatar has a huge bar at the aft end for J and F class passengers. The decor, the opulence, everything about Qatar’s A380 produces a Wow factor.

I mentioned at the top of this column that I haven’t flown the 787 but I was at Qatar’s show-and-tell in a Boeing hangar for delivery of its first 787. The same warmth. coupled with Boeing’s Sky Interior design, flows through the 787. But the 787 only has J and Y classes (or it did at the time), and the smaller real estate limits what Qatar could do compered with the giant A380. The Business Class is similar between the planes, and what struck me at the time was that the B/E Aerospace-designed J Class seat was the first in a long time where the controls were easy to understand and I didn’t feel I needed an engineering degree to operate them. However, the Recaro-supplied coach seats at 3x3x3 abreast and a tight pitch were among the most uncomfortable I’ve sat in. The same is true for the Recaro seats in US domestic-equipped Boeing 737s. I can’t imagine an international flight in the 16.9 inch Recaro seats vs the 19 inch A380 coach seats, if I were forced to fly coach as opposed to Business, which is my habit. 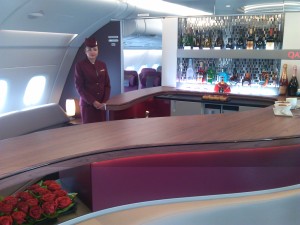 This is the bar in the Qatar Airways A380. Qatar has won several top awards for its passenger experience. Click on image to enlarge.

Cabin configuration, of course, is entirely up to the airline and nothing illustrates this more than the contrast to the Air France A380. The flight experience was fine: the cabin was spacious, the loos easily capable of Mile High use and there was plenty of room to stretch, stand and walk about during the 10 hour flight. But the cabin itself, the airline choice, was pedestrian, antiseptic and quite representative of Western airlines in Europe and the US. While American, Delta and United here and Lufthansa in Europe are whining about unfair competition and Open Skies, Qatar’s CEO, Akbar Al-Baker, is right: passenger experience may well be a better reason why the Middle East Big 3 are making inroads into US and European traffic.

Finally, a word about Boeing.

Boeing creatively led the way for the first major redesign of cabin configuration and visual appeal with the 787 since adoption of the wide-body interior look across all narrow- and wide-bodied airplanes. These designs were miles ahead of the open hat-racks and the first enclosed overhead bins, but had largely plateaued by the time the 787 design came along. The 787’s design inspired the 737 Sky Interior and the makeover of the 747-8 cabin look. Airbus trailed with the A320’s interior, having revamped it in 2007 into a highly functional and somewhat appealing look, but it’s main virtue was–functional. In 2009 Boeing unveiled the 737 Sky Interior and its 787-inspired look was, and is, visually well ahead. Airbus did a good catch-up with the A350 but as yet hasn’t done a real refresh of the A320. On cabin appeal and innovation, Boeing deserves the check mark. But in the end, it’s still up to the airline.

So what’s the bottom line?

If I were flying a route where the choice was an A380 vs a 747 or a 777 or 787 or an A330 or A350, because of the extra spaciousness, room to walk around and stretch without bumping into or stepping over others, the A380 is the obvious choice. The extra room really does make a difference on a long flight. But as I mentioned at the top of this column, I’d still prefer the non-stop, point-to-point flight in a Big Twin over adding hours through a hub to connect to an A380. It all depends on the travel pattern, and living in far-flung Seattle limits options.

49 Comments on “Pontifications: Passenger experience and the WOW factor”