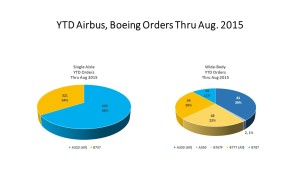 Airbus handily wins the market share race for single-aisle orders through August. Boeing wins the wide-body market share handily, boosted by the order for 50 767-300ERFs from FedEx. Take away the freighters for a passenger-to-passenger comparison and Airbus edges Boeing in wide-bodies. Sources: Airbus, Boeing. Click on image to enlarge.

Neither company reported any orders (net) for the Very Large Aircraft, the Airbus A380 and the Boeing 747-8. In fact, both sides took hits to the VLA when Russia’s TransAero couldn’t take delivery of either type–it is one of the very few airlines to have ordered both.

With cargo airlines also deferring 747-8Fs, it appears Boeing is faced with about six or seven white tails now. Airbus has a large number of A380 orders that have been deferred or which are with customers that would fall into our Bombardier-style yellow-red risk assessment.

Eliminating the FedEx 767Fs from Boeing’s YTD tally, Airbus edges Boeing in wide-bodies with a 52% share.

The wide-body competition could easily shift again if Emirates Airlines is ready to choose between the Airbus A350-900 or the Boeing 787-10 by the time the Dubai Air Show comes around in November. This bake-off is for 50-70 airplanes or more.

Another variable: whether Airbus launches the A380neo at Dubai, with a huge order from Emirates as the launch customer.

Boeing knocked the socks off Airbus last year in wide-body market share, but 2014 was an unusual year. Airbus suffered the cancellation of 70 A350s (by Emirates) and Boeing firmed up the November 2013 program launch of some 225 777Xs announced at the Dubai Air Show (Emirates, along with Qatar Airways and Etihad Airways). This is a more normal year for wide-body tallies.

The Dubai Air Show may be the determiner for this year’s bragging rights.

← Bjorn’s Corner: The seating dilemma
A320 oversold in bridge from ceo to neo →

34 Comments on “Pontifications: Airbus flies past Boeing in order race”