Pontifications: Why the 787-8 is no longer favored by Boeing

March 21, 2016, © Leeham Co: My Pontifications for the last two weeks examined how the Airbus and Boeing messaging continues to do battle for the product line ups. Boeing continues to denigrate the Airbus widebody line and Airbus fighting back, using Boeing’s own tactics alleging a product gap.

Boeing claims then A330neo is “dead on arrival” and the Airbus widebody strategy is “a mess.” Neither claim holds up under scrutiny. Certainly there is some weakness in the Airbus line: the A330-200 sales slowed to a trickle and the A330neo, especially the -800, has yet to truly advance. The A380 struggles and the A350-1000 is slow—but after the initial, unique splurge of the 777X, sales of this airplane have been anemic, too.

Airbus points out the sales of the 787-8 have dried up. So have sales of the 777-300ER, in sharp contrast to the unexpectedly strong sales for the A330ceo—enough so that Airbus is taking the production rate back up, to 7/mo, from the previously announced reduction to 6/mo.

The 787-9 is clearly the go-to airplane. Sales of the 787-10 haven’t been a barn-burner, but the company counts on the airplane to contribute to profits. One can look to the 767 Family for an analogy.

It was eclipsed by the 767-300/ER, which became the mainstay of this popular family.

The 767-400 was a sales dud, a further stretch of the -300/ER. Great for seat mile costs, but sub-par field and operational performance. 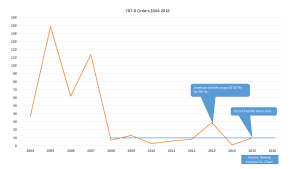 The 787-8, with a little more than 400 sales, is hampered by the legacy of the production and design woes. Models through line #101 are sub-par, with weight, design and production issues. From line 102, the lessons learned and design changes combine to produce a good airplane. But these very design changes make the 787-8 different from the 787-9 and 787-10 when it comes to production, according to people familiar with the production system.

Boeing officials have been pretty up-front that they prefer selling the more profitable, higher margin -9/10 than the low-margin (and some believe still unprofitable) -8.

An analyst on the year-end earnings call put his finger on the issue when he asked Boeing CEO Dennis Muilenburg why Boeing hasn’t adopted separate block accounting for the 787-8 and the 787-9/10 to separate out the presumed money-losing -8 from the widely accepted premise that the -9/10 are the money-makers. Muilenburg didn’t give a detailed answer, responding in generalities that Boeing had looked at the idea and concluded the total program accounting was the way to go. 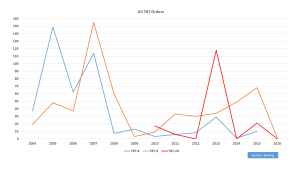 According to our Market Intelligence, there are enough differences between the production of the -8 and that of the -9/10 that Boeing essentially is building two different airplanes. The -9/10 are about 90% common, but—depending on who’s doing the talking—the -8 may only be about 40% common to the -9.

Whatever the actual numbers are for commonality and per-sub-type costs and profits, the fact is Boeing doesn’t want to sell the -8. Using the Ascend data base, the last time I looked last year, there were no deliveries scheduled for the -8 after 2020. According to one insider, who has since left the company, Boeing expected at best to build one -8 per month from 2020 to fulfill the need for a route-development airplane.

As for the A330neo, for which sales were few and far between last year, Airbus officials were focused on selling the CEO to fill the production gap. This year the focus is on the NEO. Conclusions can be drawn as this year draws to a close.

(I will note that the -10 carries 60 more passengers than the -900, but since Boeing chooses to compare the two airplanes for range, a comparison I think is nonetheless bogus, I’ll follow Boeing’s lead for the sales comparison.)

We’ll see just how well the NEO does this year. But I don’t expect a large number of sales for the -800. It’s the “LR” niche for Airbus.

85 Comments on “Pontifications: Why the 787-8 is no longer favored by Boeing”