Introduction
May 31, 2016, ©. Leeham Co: Airbus went through a complete review of all their aircraft programs as part of their yearly briefing for media in Hamburg today. A lot was said regarding the status for the different programs by Airbus CEO Farbice Bregier, its COO customers John Leahy and Executive VP Strategy and Marketing Kiran Rao. 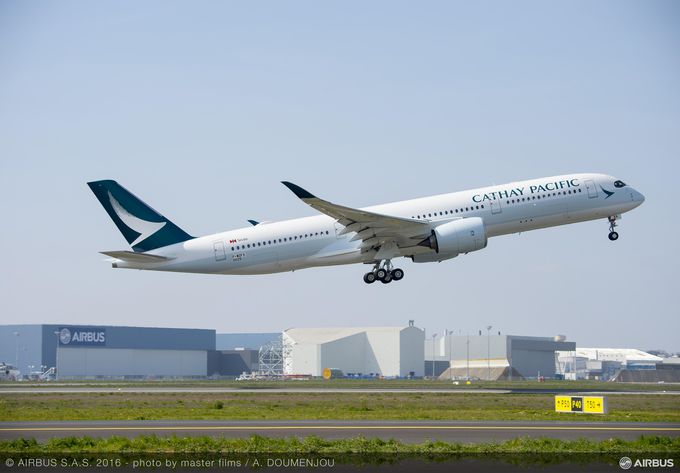 Figure 1. Most recent A350 delivery was to Cathay Pacific. source: Airbus.

The briefing was given against a backdrop of weak orders and deliveries for the first five months of the year. Both Bregier and Leahy said, “This is to be expected, it’s not sustainable that we have Book-to-Bill ratios (orders vs. deliveries) of over 1.5 or even close to two for many consecutive years. We have a backlog of 6,700 aircraft that customers expect us to deliver and they have little appetite to order new aircraft when they can earliest get them by 2021 at the earliest.

“We are now in a period of focus on deliveries and we can expect and be happy with a book to bill ratio of around one for the coming years. The extraordinary backlog also justifies our decision to increase production to 60 units per month for our A320 single aisle program.”

Here follows what was said for each of the programs.

A320
As previously described, the Pratt & Whitney-engined A320neo will resume deliveries with improved engines within the next month, figure 2. The LEAP-1A engine version received its joint FAA and EASA certification during the briefings. Deliveries of first LEAP engine aircraft will start in July.

The A320neo program manager Klaus Roewe pointed out that both engines fulfill the Airbus performance specification. It was mentioned that Lufthansa Airlines even sees over-performance on its first GTF-powered A320neo with fuel burn being around 16.5% lower than an A320ceo on typical short haul missions.

Officials were dismissive of the prospect of a Boeing 737-10, which Leahy dubbed the “Mad MAX.” The airplane would require a larger engine. Reuters reported Boeing is considering the LEAP-1A used on the A320neo rather than the smaller LEAP-1B. This is a different engine, removing commonality between the two. To accommodate the LEAP-1A, major structural changes would be required for the MAX 10, also reducing commonality to the rest of the MAX family.

Airbus can do an “A322,” a stretched version of the A321neo with a new wing, but at this stage doesn’t see the need to do so.

A330
The A330neo development is on track with first aircraft to TAP in Portugal entering final Assembly Line in Toulouse “within a couple of months”, Figure 3. Delivery is targeted for December 2017. 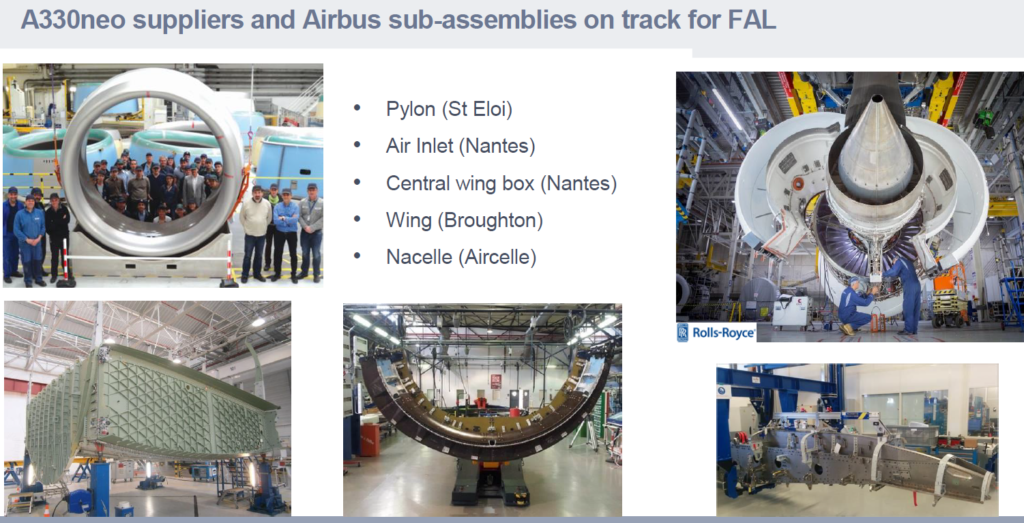 Figure 3. Production of A330neo is in full swing. Source: Airbus.

The aircraft has a new interior since the program was launched at Farnborough 2014. It is modeled after the A350 cabin and the joint marketing name for this cabin style is now “Airspace.” Initially it was said that only bins and lighting would get changed to the A350 style, but now all parts will be in A350 standard, including monuments, galleys, toilets, ceilings, lighting etc.

Airbus is studying a 245 tonne A330-900, which would add about 300nm to the range and bring it closer to the range of the Boeing 787-9 with which it competes. Alternatively, the 245t -900 could have three tonnes more cargo payload.

A350
The aircraft is proving to be more flexible than originally planned. This has allowed the creation of the 9.700nm A350-900ULR, which beat Boeing’s 777-8 at Singapore Airlines to fulfill the requirement to fly the 19 hours Singapore-New York and a bit shorter Singapore-Los Angeles missions.

The A350-1000 first aircraft is now in outside Radio and Fuel system tests (Station 18) and will fly in September, Figure 5. First delivery of the aircraft is foreseen for 4Q2017. Airbus can already see that the aircraft will fulfill its performance guarantees. 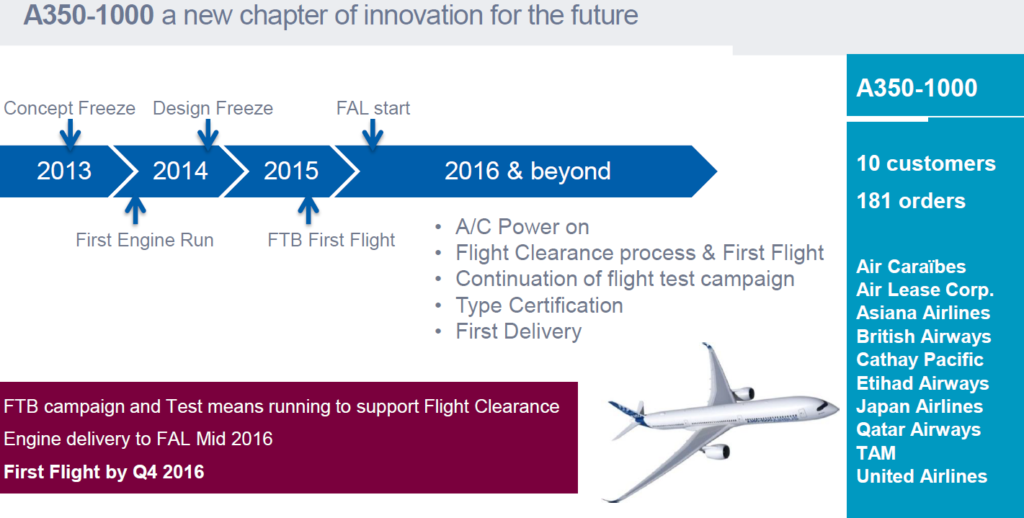 A longer version what would compete with a 777-9 has also been defined. It can keep the wing and engines with minor modifications paired with a longer fuselage. Feedback from the airlines has not yet convinced Airbus that the market is large enough to justify the variant, which was called -2000 by Leahy. Bregier concluded, “We are ready to develop the version as soon as we see market for it. We now know we can develop it with a relatively small effort. Should airlines approach us with clear demand for the version, we can develop and get it to market relatively quickly. Right now the main market seems to be in the present 777-300ER size segment and there we have an aircraft in the -1000 which takes off 30 tonnes lighter for a typical mission and therefore is considerably more efficient.”

A380
The question of an A380neo came up and was immediately answered. “With the cabin density improvements we have done, the aircraft is the most efficient aircraft flying today,” said Leahy. “We therefore don”t see an immediate need for a neo version. But this aircraft will live on for another 30 to 40 years, so it’s clear, there will be an version with new engines. We will see when there is a need to do that.”

The improvements in the cabin is continuing and the latest changes are an elimination of the sidewall stowage areas on the top floor giving an additional 10 seats in the aircraft, Figure 6. 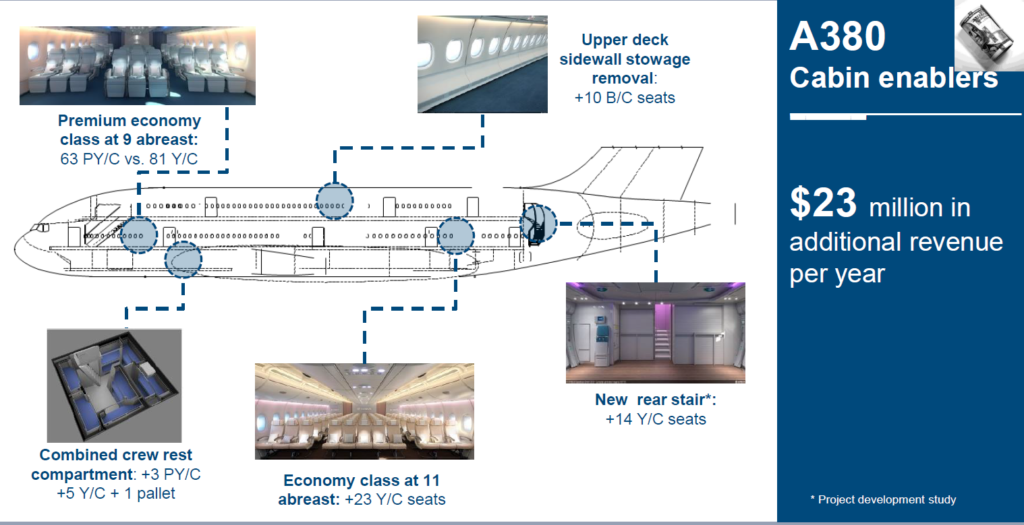