Figure 2 shows the graph developed last week which shows the number of shop visits per year for different wide-body engines.

We will now discuss how the overhaul market develops dependent on where an engine is in its life cycle. Figure 3 shows the number of engines in the market for the different types (left scale), the population’s average age (number at bottom of bars) and their shop structure. It’s a Rolls-Royce chart that we have been given access to.

To the right in the table is the CFM56 single aisle engine shop structure as a comparison. There are close to 30,000 CFM56 engines in operation, which compares to the number of engines in service for the wide-bodies. 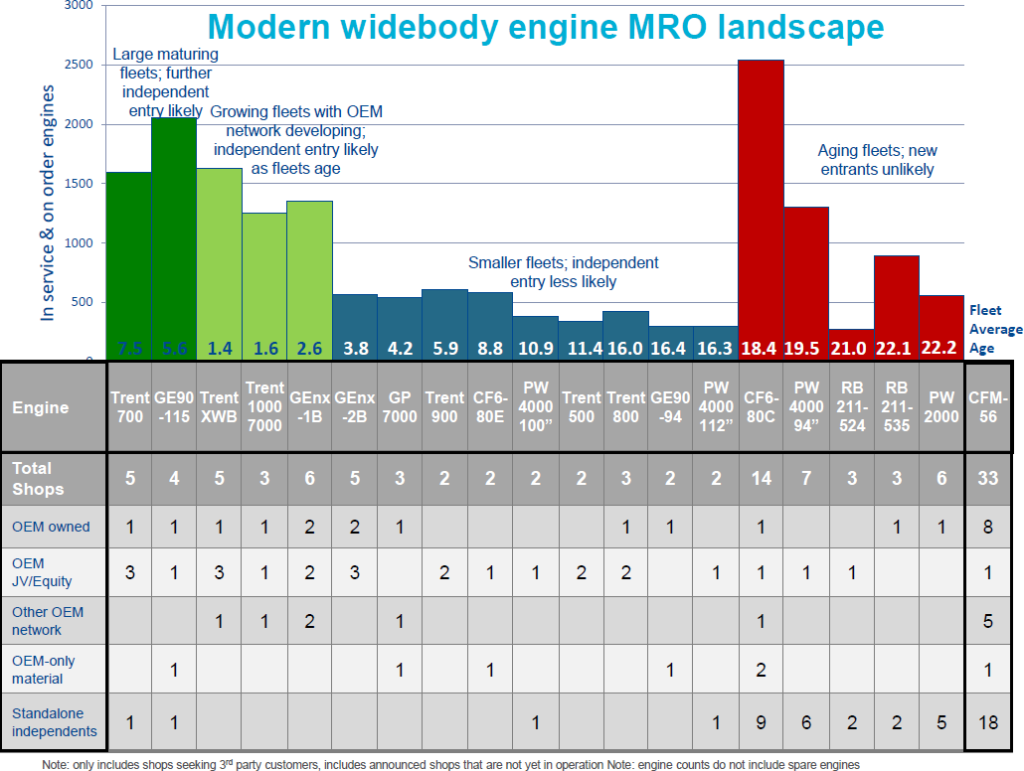 The shops called “OEM only material” are airline shops (Air France, KLM and Lufthansa Technik) which are contractually bound to use the OEM’s materials and procedures. When shops are labeled independent, they can source material on the open market from part out vendors or repair shops, in addition to the OEMs.

There is no chance of any new shops investing to overhaul CF-6-80C. The 14 shops compete for a market of 150 overhauls per year. It means many shops get less than 10 engine overhauls done per year. We said 50 were wanted and 10-20 are the minimum. All Red engines are in the Sunset phase and will not attract any new shops.

The Blue engines have relative small numbers in the market. The most common (CF6-80E, Trent 900, GP7200, about ~500 engines) have two to three OEM-affiliated shops. It’s less likely the blue engines will attract new entrants investing in qualification for these engines. The exception is the GEnx-2B (747-8), as this engine has a lot in common with the GEnx-1B for Boeing’s 787.

The GEnx-1B is part of the Light green engines.These engines are still young in the market and have a growing user base. Many engines are still maintained by the OEMs, on guarantee or power-by-the-hour agreements.

The market is growing and there will be more and more requests for independent quotes from the airlines, as these engines transit into their mature phase.

The Green engines are in the mature phase. Both the GE90 and the Trent 700 have around 300 shop visits per year and their numbers in the market are still increasing for many years. There is a clear interest for independent shops to qualify for the engines and to bid for the maintenance contracts.

There is one independent shop existing for both but there will be room for more. These independents would compete with the OEM-related shops for the jobs. Given the increasing shop visit opportunities coming into the market for these engines, and the operators want competition, it makes business sense for further shops to enter the market.