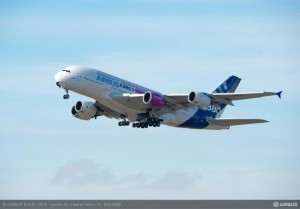 Of course I’m being facetious. The engines are too much thrust for the A380. But it’s hard to tell from the picture that the engine is out of place.

This week is the Dubai Air Show. There had been expectations in many quarters that Airbus would launch the A380neo this week, with an order from Emirates Airline, its booster. But it is not to be. Airbus isn’t ready and Emirates earlier said no decision would be forthcoming until next year. Neither would Emirates have its decision on a major twin-aisle order between the Airbus A350-900 and the Boeing 787-10.

Boeing’s chances to win the twin-jet deal may have taken a turn for the worse. According to a Reuters article, Boeing won’t make any changes to upgrade the 787-10 to overcome concerns of Tim Clark, the president and COO of Emirates, about the 787-10’s performance out of the hot desert environment. LNC had a couple of reports earlier this year about the competition here and here. The latter specifically analyzes the hot climate issue.

We don’t expect much in the way of major orders at the Dubai Air Show. Airbus tamped down expectations and so has Boeing.

The newly elected premier of Canada, Justin Trudeau, appears to have killed a $2.3bn order for Bombardier, according to The Toronto Globe and Mail.

Porter Airlines placed a conditional order for up to 30 CSeries, conditional on the Toronto, Ontario and federal governments changing policy and allowing commercial jets at the downtown Billy Bishop Airport. Trudeau, who hasn’t even taken office yet, says no.

Weirdly, the federal government is considering a request for $1bn in financial aid to Bombardier.

Does the left hand know what the right hand is doing? 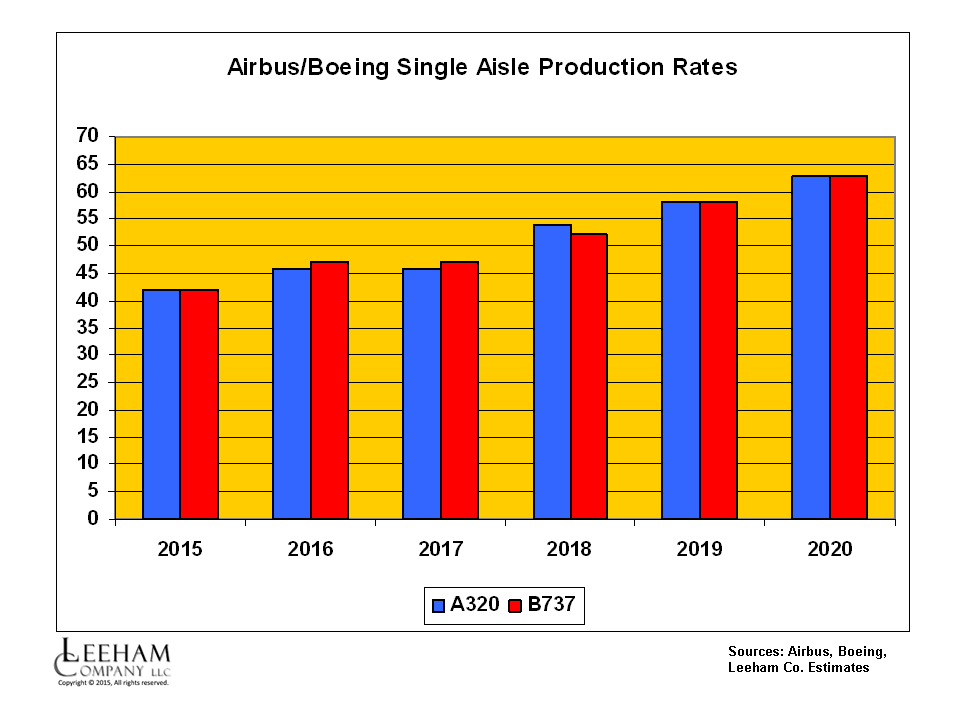 We made this forecast in February 2015. Click on image to enlarge.

Way back in the summer of 2013, we predicted production wars were coming between Airbus and Boeing. Airbus has now said it will take A320 production to 60/mo by mid-2019. Boeing, which previously announced its 737 rate would go to 52/mo by 2018, it almost sure to follow.

Suppliers and aerospace analysts predictably worried that supply will exceed demand. But Airbus has all year been showing a chart that its backlog by 2020 exceeds a production rate of 60. Boeing hasn’t shown a similar chart that I’ve seen, but Market Intelligence indicates that Boeing has been losing sales for the lack of production slots. Both companies have backlogs that extend beyond 2020.

Some believe that demand will collapse before Boeing even takes production to 52/mo. Unless there is a major geopolitical event of some kind, or a global depression, I don’t agree. Will there be dips? Sure. But with a backlog as big as it is, I don’t expect an ordinary dip to be meaningful.