06 November 2015, ©. Leeham Co: COMAC’s C919 was rolled out in the week. We got to see a new shiny aircraft which looked ready to fly. The nicely curved fuselage and wings were immaculate, the paint was shiny and the CFM LEAP-1C engines were ready to go.

Yet many ask, when will it fly for the first time? It used to be that when the airframe was finished and the engines ran reliably it was time to fly. No longer! Today the most challenging part of an aircraft program is the integration of all the complex systems which hide under the skin. This is what kept the Bombardier CSeries on ground longer than it should and the Boeing 787 and Airbus A380 had the same flu (the latter also had to short wires).

It is the part of the aircraft which takes longest to get to work reliably. The A380 is known for its long period of nuisance warnings from the complex avionics system after entry into service and the reliability work for the 787 has to a large extent been one of software tuning of its system side.

As the system function of modern aircraft has grown more complex the whole architecture of how it was built had to be changed. Here’s how.

The classical system architecture of an aircraft was that each important function like flight controls, engine control, air-conditioning, radios, navigation equipment, etc., had its own computers sitting in dedicated boxes. These boxes communicated with other boxes via point-to-point slow speed (0.1Mbit/s ARINC429) network links. A typical page in a system description for pilots of a 1980’s aircraft like the Airbus A320 looks like: 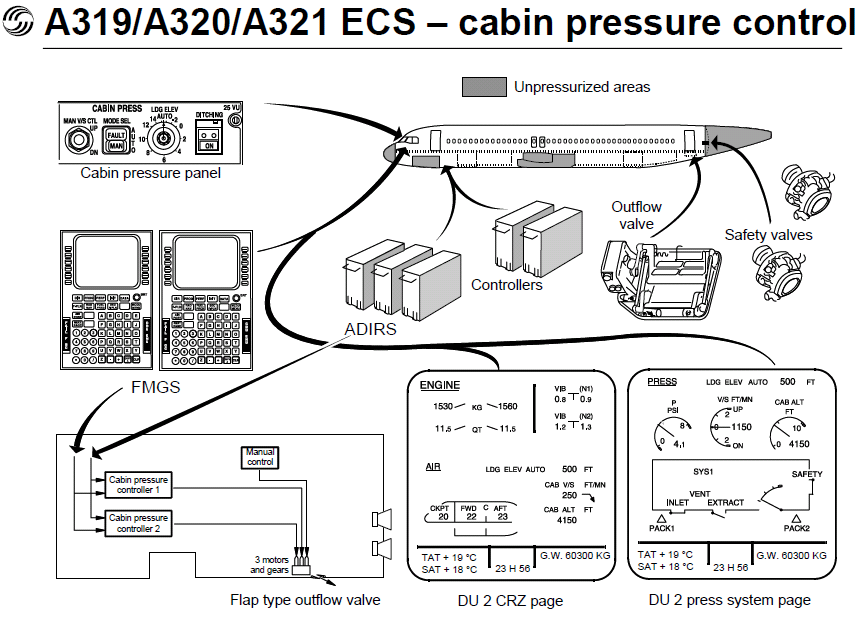 In the picture, the cabin pressure in the aircraft is controlled by eight boxes talking to each other. The aircraft’s altitude had to be given from the ADIRS (Air Data Inertial Reference Unit) boxes to the air conditioning controllers so they could regulate the cabin outflow valve to get the correct cabin pressure. As the Flight Management Guidance System (FMGS) computers should be able to control the pressure, they needed a link as well as did the cockpit control panel. In all, eight boxes have eight point-to-point links (and therefore wires) to control one outflow valve.

As the functionality increased, the number of boxes and their point-to-point networking needs exploded. It got complex and heavy. It was time for a smarter concept, the Integrated Modular Avionics (IMA) architecture. This can simplest be described as an airborne adaptation of a modern industrial real time computer network.

Instead of discrete boxes per function and point-to-point networking, many general purpose computing units (part of an IMA system) are connected by a double 100Mbit Ethernet network (called AFDX or ARINC 664part7). Functions like the cabin’s air conditioning system and its control of the outflow valves were now an application running in this network of standardized computers and talking over Ethernet with the FMS, ADIRS and cockpit display/control applications. Its commands to the outflow valves were over standardized input/output modules which all applications could use.

It is obvious that such an architecture is more efficient and flexible than the classical one. The change started in smaller scale on the Boeing 777, then went full circle for the A380, which based the whole avionics system on IMA. Boeing’s 787, Airbus’ A350 and Bombardier’s CSeries then followed and now COMAC’s C919 is the latest aircraft to implement IMA around an AFDX network.

The are many advantages of an IMA architecture. The number of unique boxes with their hardware and software that needs to be kept current and kept as spares by the operators goes down. Now they keep stock of a few IMA modules and ADFX network controllers.

Instead of updating boxes to fix problems, software can be updated. In the case of the 787, this is through a special maintenance laptop which connects to the aircraft via Wi-Fi. Should an IMA module stop working, the system shuffles the applications automatically to functioning modules, therefore the aircraft’s avionics system can still function despite hardware failures.

We could have started with the In Flight Entertainment (IFE) system. This is today a separate network of hundreds of computers where each seat has its own Android computer with local hard disk so the movies and other applications shall be quickly controlled and loaded from the servers that are the heart of the network.

On top of the IFE system comes more and more often the Wi-Fi-based In Flight Internet Connectivity system. Add to that, the cabin crew’s cabin control system and the pilots’ electronics flight bag (EFB) system.

Note that we are not even at the core aircraft systems yet and we have probably described something like 200 to 700 computers (dependent on aircraft) that need to talk to each other over different networks.

No wonder the system side of a modern airliner is the real nut to crack before the aircraft can be certified and delivered.

← No fear of C919 for a generation
Pontifications: A380neo? Try A380TXWB. Dubai Air Show and other Odds and Ends →