France to invest 15 billion Euro in its aeronautical industry

The plan has three focus areas: 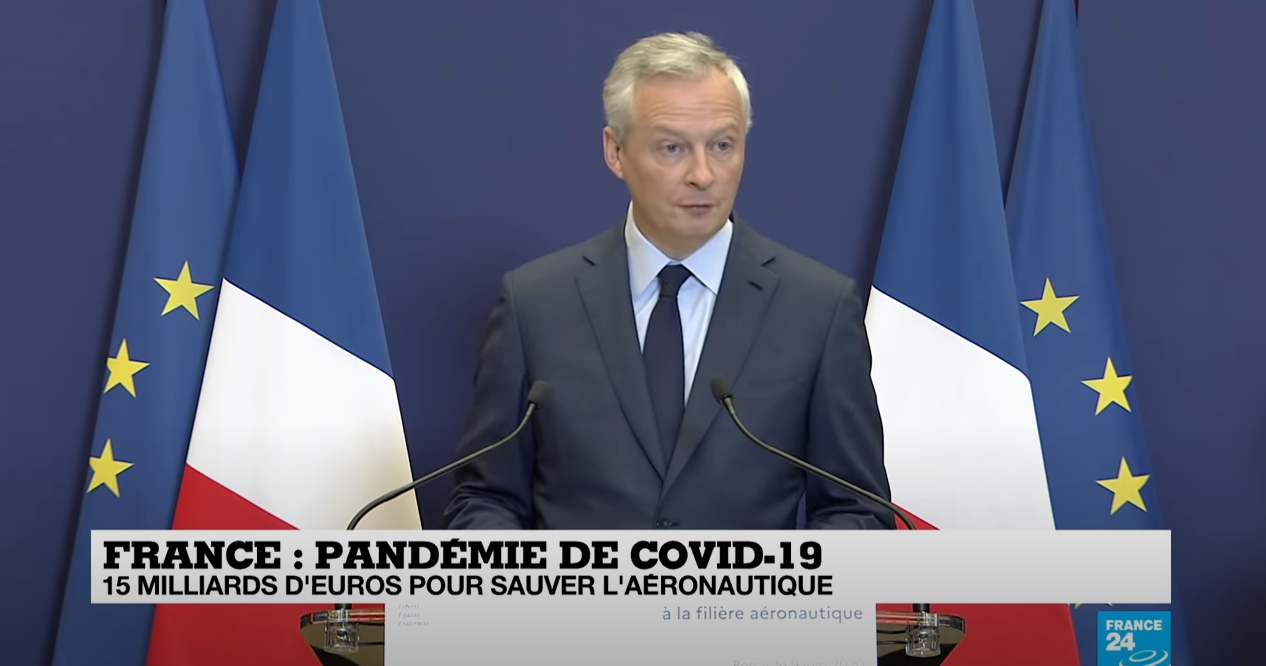 The French Finance Minister, Bruno le Mair (pictured), started the presentation by emphasizing the importance of the French aeronautical industry (we present the speeches almost verbatim as it describes the route for the French industry and by it, Airbus for the next years):

“It’s the pride of the French nation and the outstanding example of our industrial success of the last 100 years. It’s the only national industry in the world that, besides the US, can develop and produce civil airliners, military fighters, and helicopters.

In civil airliners, it’s leading the world. We will not allow this crisis to change that by the Boeing’s of the US or COMAC’s of China. In fact, we will use the crisis to accelerate our advantage by being the first industry to develop the de-carbonized airliner.

The investments we present will be made over a long time to avoid the loss of employment and know-how. The crunch in orders and deliveries shall not destroy the unique competency it has taken decades to build.

We, therefore, roll out this plan with three focus areas:

The French aeronautical industry, with its supply chain, employs 300,000 people. Of these, 35,000 are highly qualified engineers. We will not let the pandemic waste this resource that has taken decades to build up. Without this plan, 100,000 of these jobs would be in peril.

Let’s be clear, there will be adjustments necessary, but these should be limited as far as possible.

The support will be through export guarantees of several billion euros:

We will also invest in the military. We invest 832 million euros in pulling forward orders for several programs.

Our goal is to speed up the transformation of the industries’ Small and Medium Enterprises (SMEs) that form the backbone of the supply chain. It hasn’t had the necessary changes and consolidations because of the constant augmentation in civil aircraft deliveries.

For improve this industry, we set up two funds:

The goal is to accelerate the de-carbonization of the French aeronautical industry. We set a goal to achieve a carbon-neutral airliner by 2035 instead of 2050. This will be made possible by engines with a very high bypass ratio and the use of hydrogen.

France will, by it, be the country in which tomorrow’s de-carbonized civil aircraft are designed and produced.

To enable this, the Council for Research of Civil Aeronautics, CORAC, will get 1.5 billion euros to spend over three years. It supports development in France of fuel reduction technology, electrification systems, and tests with neutral carbon fuels like hydrogen.”

Details by the Transport Minister

The French Minister of Transport, Elisabeth Borne, followed up by detailing the de-carbonization plan. She emphasized the State’s investments shall be used to achieve a de-carbonized air transport industry, and France and Europe should lead this change:

“The immediate risk of the situation is a reduction in R&D, and thus redundancies among the 35,000 highly qualified engineers.

With Airbus representing 50% of the airliners flying today and SAFRAN supplying 65% of all single-aisle engines, we can lead the change to de-carbonized air transport for the world.

It supports the development of an ultra-clean replacement of the A320 series for the early 2030s, with a 30% reduction in fuel consumption and a change by 2035 to non-carbon-emitting hydrogen aircraft. For the latter, a demonstrator will be presented between 2026 and 2028.

The plan also includes a hybrid regional aircraft in this decade together with other clean vehicles like helicopters, drones, or general aviation aircraft.”

Finally, it was explained how the 3 billion euro loan and 4 billion loan guarantees to Air France fits in. The joint program of 7 billion euros presumes, for instance, that Air France does not compete with the high-speed trains in France for train trips taking under 2.5 hours.

We give the statements by the French Ministers almost verbatim as they say a lot about where Airbus and the French industry is going.

It will be hydrogen that replaces today’s fossil fuel and not batteries. The declarations are 100% in line with what I wrote about in the 20 part Corner series of “Why e in ePlane shall stand for environment”. The summary is found here.