Bjorn’s Corner: What did we learn in 2015; engines

15 January 2016, ©. Leeham Co: Last week we looked back on what happened in 2015 on the airframe front. We finish the retrospective by looking at what turbofan engine technology came to market in 2015. New engine technology is vital, as it is on the engine side that the quest for higher fuel efficiency has the largest successes.

While advances on the airframe side might bring an additional 5% per generation, the engines typically increase their efficiency per new generation with up to three times that value. Fuel efficiency per delivered thrust unit was improved with a whopping 15% over the engine it replaces for the Pratt & Whitney Geared Turbofan (PW GTF). It was certified for use on the Airbus A320neo in Q4 2015

The competing CFM LEAP-1A shall deliver the same improvement level to the A320neo once it is certified in the summer of this year. This engine has a smaller sister that started ground tests last year, the LEAP-1B, which is developed for the Boeing 737 MAX series.

The engine that is easily forgotten is the Rolls Royce Trent XWB. It entered service on the Airbus A350-900 during the year. It brings an improvement level of around 10% compared to the engines of the aircraft that the A350 replaces (Airbus A340/A330ceo and Boeing’s 777-200 range).

A 15% improvement in fuel efficiency compared to the engine generation that it replaces is a major feat. It can be instructive to look at how this is achieved and what is the net improvement level from the new engine technology once we combine everything at the aircraft level. The overall story is told in Figure 1. 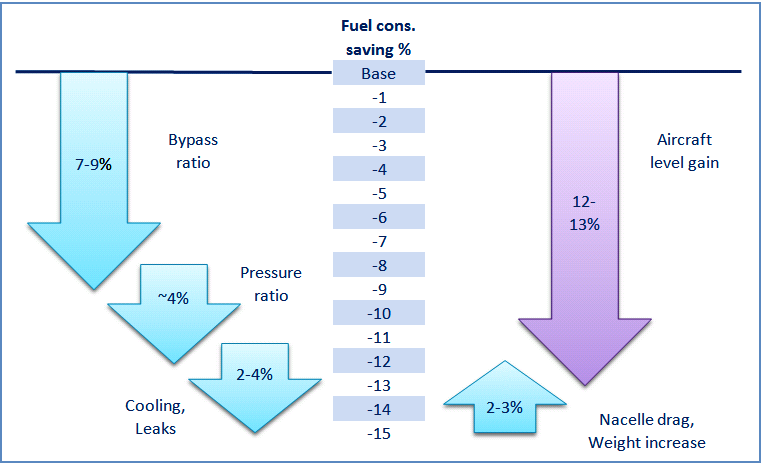 Before we go into the different methods to increase efficiency, we need to understand why I will not give one value for the efficiency gain for each engine technology. Turbofan engines are developed to cover a thrust range. For the engines used on the A320neo, this is 24klbf to 33klbf (lbf for force). This coverage is achieved by producing one engine variant and spinning it to a different maximum RPM to achieve the desired thrust range.

As this is done, the core driving the fan has to work harder. Therefore the By Pass Ratio (BPR) is lower for a high thrust engine variant than an entry level one. Consequently the efficiency gain from increasing the BPR varies between engine variants in a product range.

As a lower specific thrust decreases the engine’s thrust for the same air flowing through the engine, the amount of air that is accelerated has to be increased. This is achieved with a larger fan, the engine’s By-Pass Ratio (BPR) is increased to keep the desired thrust level. (Observe that this is the chicken-and-egg order; first one decides on desired specific thrust, then the BPR falls out from the thrust needed).

The different engines use the lower specific thrust technique to varying degree, as it also has drawbacks. The larger fan increases the engine’s diameter and therefore drag and weight. It also requires more shaft horsepower from the low pressure turbine to drive the fan. The fan section and low pressure turbine are the heaviest parts of a turbofan engine, so a high propulsive efficiency means a heavy engine.

There are several ways to combat the weight increase. One is used by the CFM LEAP; it uses an advanced Carbon Fibre Reinforced Plastic (CFRP) fan and fan case. The Pratt & Whitney (PW) GTF uses a fast spinning and therefore smaller low pressure turbine by putting a gear ratio of 3:1 between the turbine and the fan (the fan needs to spin slowly). The Rolls Royce Trent shortens the engine by dividing it into three optimised and therefore short spools, thereby making each spool as light as possible.

The most efficient technique is the geared one. The PW GTF can therefore produce a relatively light engine with a high BPR (14:1) without resorting to CFRP techniques for fan and fan case. The LEAP can stay with a simpler direct drive principle by means of combining an 11:1 BPR (9:1 for the smaller 1B) with a CFRP fan/fan case. The RR Trent XWB uses a hollow Titanium fan to limit the weight increase but will change to CFRP fan/fan case for the next engine generation.

Of the three, the PW GTF uses its geared principle to put the largest efficiency gain in lowered specific thrust, around 8%-9% over previous generation engines. The direct drive LEAP and Trent have gains of around 7%-8%.

All engines use advances in overall Pressure Ratio (PR) to increase the combustion efficiency. Cruise pressure ratios grow from the low 30s to low 40s for the single aisle engines and to the mid-40s for the Trent XWB.

Higher PR means higher temperatures for the compressor, combustor and turbines. For the combustor and turbines, compressor air can be tapped for cooling. For the compressor, it can’t. Therefore modern high compression compressors must be made efficient (less heat generated) and use advanced materials. An efficient compressor also uses less horsepower to generate its pressure, therefore requiring a smaller turbine. All manufacturers use advanced 3D aerodynamics to increase the efficiency of their latest compressors.

To keep combustor and turbines within the capabilities of their materials, cooling air is tapped from the engines compressors. Over 20% of the air entering the engines core can be routed away from compressor stages to cool different sections of the engine. The air is always tapped at the lowest pressure possible (it still has to have a higher pressure than the area of its use, otherwise hot gas flows back in the engine). Thereby it has the lowest temperature and not too much work invested in it.

All discussed engines throttle back the amount of cooling air used when the engine is entering a lower power state, like cruise. The techniques vary with the LEAP and Trent throttling both static and rotating parts, whereas the GTF stays with static parts throttling.

The best technique is, of course, if the material used requires no cooling; cooling air zaps the engine’s efficiency. All manufacturers invest in advanced material research. CFM is leading this area, with the LEAP being the first engine to employ Ceramic Matrix Composites (CMC) for the hottest static parts; combustor and first turbine shroud.

A final area of much work is the multitude of leak areas in the engines. At each compressor and turbine stage, there are leak areas where the air is trying to avoid following the path desired by the designer. Air is leaking over the tips and under the feet of blades (the reason for tip clearance control and BLISK=one piece disk+blade stages), into the center of the engine over rotating seals (therefore more advanced rotating seals) and in general everywhere where it’s not wanted.

Especially sensitive areas are where oil is present, like the shaft bearing areas. Special bearing boxes are designed so that high pressure cooling air in the box blocks any hot leaked gases from entering, yet another zap for our precious compressor air.

All engines employ advanced leak preventing technology. Combined with large investments in cooling and material technology, the LEAP and Trent gain around 4% efficiency in this domain; the GTF is content with somewhat less.

As described, the quest for higher propulsive efficiency brings larger and heavier engines (the higher PR also demands a heavier core). This creates losses at the aircraft level. I have written about this before and will not repeat the details here.

Suffice to say that all engines have aircraft level losses due to larger nacelles and higher engine weights. The larger nacelle has a larger wetted area, which causes parasitic drag. The higher engine weight combine with larger heavier nacelles and thrust reversers to increase the aircraft’s empty weight by several tonnes. This increases the aircraft’s drag due to weight, the induced drag.

This reduces an engine efficiency gain of 15% to something like 12%-13% on an aircraft level.