Airbus continues to have a commanding lead over Boeing for single-aisle, neo v MAX backlog.

Although Airbus got pounded by Boeing in wide-body orders last year, the backlog tilts only slightly in Boeing’s favor.

Looking only at the A320neo family vs the 737 MAX, Airbus had a 59% market share of the backlog at Dec. 31. Adding the ceo and the NG makes no difference; there was only one airplane difference between them. 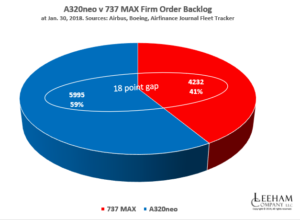 The addition of the 737-10 to the MAX family, coming at mid-year, only marginally helped Boeing: there were about 150 incremental orders after swaps from the 737-8 and 737-9, launching the program at the Paris Air Show.

The shortcomings of the MAX 7, in our view, have been discussed many times, so I won’t repeat them here. Its future is that of a niche airplane for airlines, a BBJ and as a military transport, in our view.

The MAX 9 was getting killed by the Airbus A321neo sales, so Boeing launched the MAX 10. LNC has written that the MAX 10 gave Boeing a product that’s on an economic par with the A321neo (Boeing and Airbus each claim the advantage; our independent analysis shows there is “economic indifference” between the two.) It was creation of the MAX 10 that put Boeing in the race for the Delta Air Lines order, which ultimately went to Airbus, but which was a highly competitive race.

But the MAX 10 has field performance issues that can’t match the A321neo, giving the latter airplane its historic advantage over the MAX 9.

While Boeing sharply trails Airbus today in market share, this is, perhaps, a bit misleading. A far larger percentage of A320 family operators ordered the neo compared with a smaller number of 737NG operators. Based on this alone, Boeing has more upside to regain market share than Airbus has to maintain its lead.

Airbus needs to grow the market for the neo, which it can do at the lower end of the Middle of the Market sector with the A321neo—something Boeing can’t do with the MAX 10.

Boeing’s market share looks worse, however, when the emerging competitors in the single-aisle sector are factored in.

Airbus’ commanding lead over Boeing shrinks slightly when these competitors are factored in. 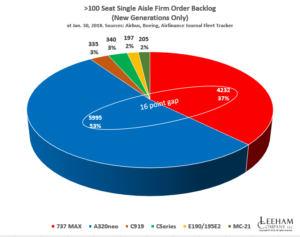 Bombardier and Embraer cover the low end of this sector, 100-150 seats, that Airbus and Boeing essentially have exited. The A319neo and 737-7 are largely rejected by the market.

The COMAC C919 and Irkut MC-21 don’t have much market penetration and as yet are restricted by market forces to their home countries.

None of these four OEMs command more than 3% of the backlog of new generation aircraft. Collectively, they capture 10% of the market. This reduces Airbus’ share to 53% of the single-aisle backlog and Boeing to just 37%.

(If Bombardier’s C Series is lumped in with Airbus, pending the acquisition of 50.01% of the program, Airbus’ share climbs to 56% of the six OEMs.)

It’s a surprisingly low showing for the venerable 737.

Boeing needs to new airplane to replace the 737. However, with a MAX backlog of more than 4,000 aircraft, Boeing isn’t hurting. In fact, the financial results from the 737 program, along with the increasing cash flow from the 787 program, are staples of Boeing’s financial performance.

Last year was Boeing’s year for wide-bodies. Boeing captured 77% of the firm orders and announced commitments for many more. The Emirates Airline order for 40 787s, announced at the Dubai Air Show in November, wasn’t booked into last year’s tally. 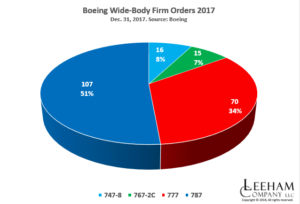 Boeing ended the year under a 1:1 book:bill for the 787—it hasn’t won more orders than deliveries since 2013. Had the EK order been firmed up, the 1:1 would have been reached. But the deal gives Boeing a good jump-start on this year’s contracts, when it’s firmed up.

In all, there were 208 orders for all types. 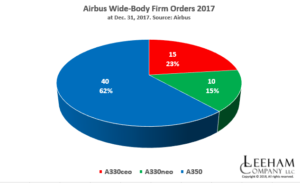 The A330neo continues to struggle in a low-price fuel environment.

However, as badly as Airbus was thumped last year, the backlogs are close: Airbus has 1,123 wide-bodies in backlog at December 31; Boeing has 1,158.