JADC is partly owned by Mitsubishi, which is developing the MRJ70/90 and which is on several Boeing programs.

I like the JADC forecast because it segments the seating categories in more detail than Airbus and Boeing and somewhat differently than Bombardier and Embraer.

I also view JADC as having less of an axe to grind than the Big Four OEMs.

A couple of quick take-aways: 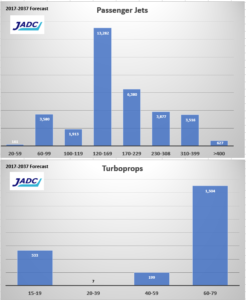 For decades, the Boeing 747 and later the Airbus A380 have been associated as “Very Large Aircraft.” Boeing steadily reduced its forecast of the VLA category while Airbus largely kept its forecast between 1,200 and 1,700, depending on the year.

Boeing eliminated the VLA category this year from its Current Market Outlook. Airbus retains the category. In a surprise, Airbus told me at the Paris Air Show that its VLA forecast is not limited to the 747 and A380 but includes any aircraft delivered with more than 400 seats. Airbus cited as an example the A330-300 delivered to Cebu Pacific with 436 seats. It would also include the Boeing 777-300ERs delivered to Air Canada with 456 seats, an example not cited by Airbus but which qualifies under this definition.

The 777-9, nominally at 407-425 seats in three-class configuration, would be a VLA under the previous Boeing definition but for reasons that defy logic, Boeing refused to so categorize the 777-9, instead lumping it in with the Large Twin-Engine transport sector.

JADC retains the >400 category but its forecast is about half that of Airbus, at 627 jets.

Middle of the Market or Small Twin-Aisle

Boeing seems headed on a path to launch the so-called Middle of the Market airplane next year. It’s generally defined as 220-270 seats. Boeing says the “Small Twin-Aisle” sector has a demand of 4,000-5,000 aircraft but refuses to publicly specify how much of this is for the MOM aircraft, also known as the New Midrange Aircraft or 797.

JADC’s forecast defines the smaller twin-aisle as 230-309 seats—close to the NMA description, but not precisely so. Its forecast for this sector is 3,877 aircraft. It’s logical to reduce this figure to more precisely fit the NMA definition, but by how much?

JADC sees about 1,900 aircraft will be required over the next 20 years in this sector. BBD and EMB should retain the lion’s share of the market even as Sukhoi and Mitsubishi ponder entering this sector.

JADC eliminates the already small previous demand for a 90-seat turboprop from its forecast. It also reduces the total demand from last year.

The company sees the 60-79 seat turboprops (ie, ATR-72 and Bombardier Q400) absorbing the previous demand for 90-seaters (fewer than 300). Small jets will also take up the demand, such as it was.

The demand now filled by the ATR-42 is a miniscule 199 aircraft over 20 years, JADC forecasts.