Aug. 6, 2018 © Leeham News: It happened to Airbus. It sort of happened to Boeing. It was bound to happen in a much bigger way to Boeing, and it has.

Some 40 737s are now sitting around the Renton assembly plant in a major supply-chain meltdown.

This follows the highly publicized, two-year long supplier meltdown at Airbus as Pratt & Whitney and CFM fell down on engine deliveries and technical problems for their GTF and LEAP-1A engines, respectively.

Airbus also was hurt by interior supplier delays from Zodiac for its A350s.

Boeing suffered from engine problems on the Rolls-Royce Trent 1000 that spilled over to new-production 787s. “Gliders” emerged from the assembly lines in Everett and Charleston as new engines were diverted to grounded 787s.

CFM also failed to deliver LEAP-1B engines on time to Boeing for 737s, resulting in gliders at Renton.

Bombardier also suffered from delays by PW and Zodiac on its C Series, running behind on delivery guidance from the time the airplane was certified.

Meltdown shouldn’t be a surprise

The meltdown shouldn’t be a surprise to anyone paying close attention—or even modest attention.

The Airbus problems with Pratt & Whitney and Zodiac for the A320neo and A350 were obvious by the number of airplanes stacking up at Toulouse and Hamburg, unhappy customers (notably, the vociferous Akbar Al Baker, CEO of Qatar Airways) and the candor of Airbus officials, who did nothing to downplay the issues.

Although PW got nearly all the bad press for its GTF troubles, less publicized (and less impactful) were the technical problems and late deliveries of the CFM LEAP-1A.

At one point, Airbus had around 100 A320neos parked without engines.

CFM’s partner, Safran, has been really clear that any talk of boosting production beyond the committed 60/mo A320s is discouraged because of the pressure on producing engines at an unprecedented rate.

Boeing has had its own problems as well, though far less publicized than Airbus.

It was up to the media to reveal the seriousness of the Trent 1000 issues on the in-service 787s and the knock-on effect to the in-production airplanes. Only via enthusiast photos at Paine Field (787s) and Renton (737s) did the Boeing Gliders come to light.

Even then, Boeing said these were inconveniences, not problems.

Spirit Aerosystems missed some deliveries of its fuselages when its own supply chain fell down on the job.

Following an earnings call last week, the aerospace analyst for Canaccord Genuity wrote, “While the company has largely caught up with the 15 737 fuselages that were delayed coming out of Q1/18 (~5 still running late), management indicated that there is still a lack of consistency on the program and with deliveries to Boeing (quality and sequence). Moreover, the company indicated that there are also still a handful of suppliers that are struggling.

“Spirit has increased its dual-sourcing to help alleviate the pressure and is factoring in some cash recovery from suppliers as part of its full year 2018 guidance. The A350s are now back to normal shipment, but the 737 continues to require some expedited freight, which we believe will be normalized by Q3/18.”

This isn’t the first time there was a supply chain meltdown at Boeing.

Twenty-one years ago, in 1997, when Boeing was producing 21 737s a month on its way to 43, the company shut down the 737 and 747 lines for a month because of supply chain strain, shortages and other production issues.

The snafus caused a write off of nearly $2bn and cost Ron Woodard, CEO of Boeing Commercial Airplanes, his job. Another $1bn in customer penalties was due the following year.

(Some thought the company CEO, Phil Condit, should also have lost his job, but he held on until the tanker leasing scandal in 2003.) 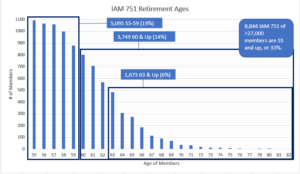 The Seattle Times also reported that Boeing has a labor shortage at its 737 plant, the result of a cost-cutting drive to shrink its workforce through voluntary, accelerated retirements. Boeing now has to shift personnel from other programs and recall some to deal with the backlog.

This shouldn’t come as a surprise, either.

Last March, LNC analyzed the aging workforce of the IAM 751, Boeing’s touch-labor union, using data provided by 751 and concluded that 19% of the current workforce who are 751 members are aged 55-59. This is 5,095 workers.

In other words, 33% of Boeing’s touch-labor workers are already retirement age.

(Parenthetically, this one reason why Boeing is speeding toward a transformation toward automation on its production lines.)