Upgrades for the B-52: The USAF and Boeing are upgrading the Boeing B-52 bomber to further extend the service life. The LA Times via the Seattle Times has this story. This is remarkable; the B-52 was designed in 1948 to be the USA’s aerial backbone against the Soviet Union in the Cold War. It bombed Iraq in the 1991 Gulf War and continues to out-perform the B-1B bomber, which was supposed to replace the old gal, nicknamed by some as BUFF.

More on MRJ Delay: Mitsubishi made it official: the MRJ 90 passenger regional jet will be delayed another year. There are several stories via Google News; this Reuters piece is typical. Aviation Week has a good timeline recap.

Here’s how pending new airplane programs now appear to line up for Entry into Service:

We don’t have enough visibility on the Irkut MS-21 for inclusion in the Table.

Here’s a real oddity: A man in underwear broke into the German Chancellor’s airplane.

American-US Airways: Airchive has this long analysis (and it’s only Part 1 of 2), taking a look at the DOJ complaint. It’s 15 pages even after copy-and-paste into Word and re-sized to 10 point type.

In doing so, it looks like the E-170 will be allowed to wither on the vine.

This is a huge win for PW and setbacks for Rolls-Royce, which sorely wanted to win the E-Jet RE for its Advance 2 RR development; and for GE, the incumbent supplier of the CF34 and which was developing the Next Generation variant for the E-Jet. 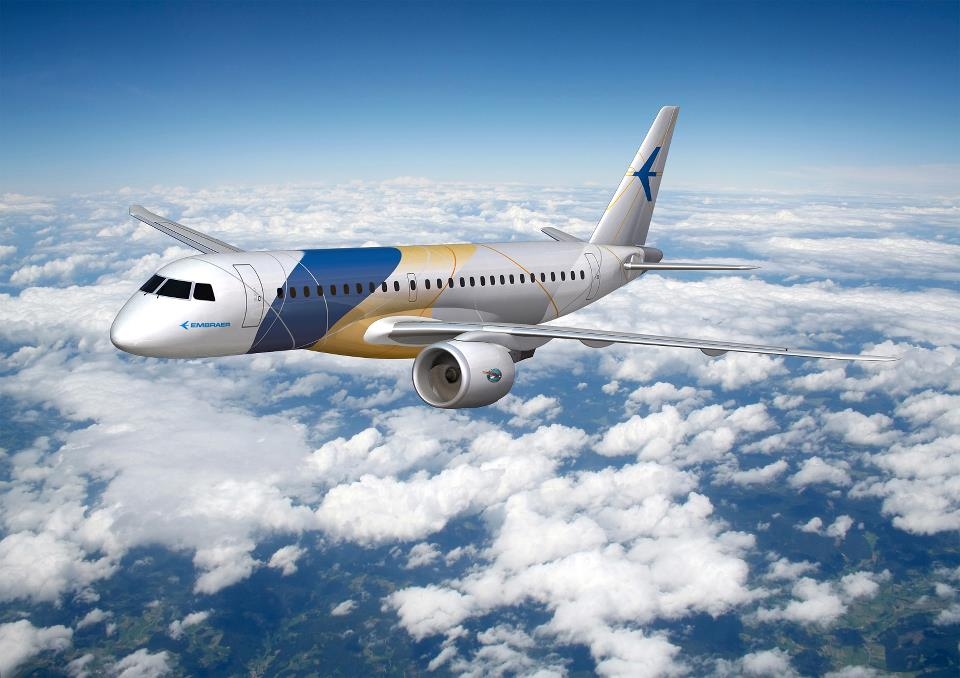 It’s yet another validation for the GTF. Versions of this engine will power the Mitsubishi MRJ, the Bombardier CSeries, the Irkut MS-21, the Airbus A320neo family and now the E-Jet RE.

It’s a huge comeback for PW, which made a major strategic error in not competing to power the Boeing 737 300/400/500. Boeing continues to use the GE/CFM LEAP engine as its sole-source supply for the 737 MAX, though Boeing seriously evaluated the GTF as well.

Below is EMB’s press release:

São José dos Campos, January 8, 2013 – Embraer SA (NYSE: ERJ; BM&FBOVESPA: EMBR3) announced today that Pratt & Whitney´s PurePower® Geared TurbofanTM engines have been selected for its future, second generation of E-Jets, with entry into service planned for 2018. The decision is an important milestone in the program, which is expected to be officially launched later this year.

The new engines – the PW1700G and PW1900G – range in thrust from 15,000 to 22,000 pounds. In combination with new aerodynamically advanced wings, state-of-the-art full fly-by-wire flight controls and other systems evolutions, they will result in double digit improvements in fuel burn, maintenance costs, emissions and external noise.

“We are very happy to expand our partnership with Pratt & Whitney, keeping the E-Jets family as the best solution for our customers, today and in the future”, said Frederico Fleury Curado, President & CEO of Embraer. “The PurePower GTF engines are a great fit to the next generation of our E-Jets and we look forward to another long lasting and successful program with Pratt & Whitney”.

“We are proud that Embraer has recognized the unmatched value of the PurePower engine, and we are committed to supporting a successful launch of the new E-Jet aircraft family,” said Pratt & Whitney President David Hess. “To date, Pratt & Whitney has completed more than 4,200 hours and 12,400 cycles of full engine testing for the PurePower engine family, demonstrating the benefits and reliability of the engine architecture.” Pratt & Whitney is a division of United Technologies Corp. (NYSE: UTX).

The second generation of E-Jets will be a significant step in Embraer´s commitment to continuously invest in this line of commercial jets, complementing a series of ongoing improvements currently being implemented in the existing family, with great benefits to its customers. Embraer´s objective is to offer the best product and maintain its leadership in the 70 to 120 seat market.

Odds and Ends: Random thoughts, Seinfeld style (i.e., about nothing)

From Twitter: Boeing Defense ‏@BoeingDefense In Sept issue of #Boeing Frontiers: With #Apollo roots, Boeing has grown to be largest #aerospace employer in #Alabama http://ow.ly/dB0Ef

Comment: We remember when Boeing said Alabamans couldn’t build a tricycle (during the bitter competition for the KC-X tanker).

Hunker Down: We’re going into the bunker on this one–Washington should become a right-to-work state. In 2008, IAM 751 (during its strike) boasted WA is the fourth most-unionized state in the country. We know this inhibits expanding aerospace here. We’ve heard it from companies. We’ve heard it from the head of one of the Economic Development Commissions here that unions are the first topic to come up when he is recruiting companies to expand here. We don’t object to unions per se but we don’t think someone should be forced to join one. (That’s how we feel about Republicans, too….)

Take two Viagra and try again: The refueling boom was being extended when it fell off an Airbus KC-30 during a test flight.

Thank you for smoking: Airbus is really pushing Europe to delay implementation of its emissions trading scheme, which jeaopardizes orders from China. Despite the sarcasm, we agree with Airbus–any regulations through be through ICAO, not on Europe’s own, ill-advised hook.

Macht nichts: No AirAsia order at the Berlin Air Show after all. The airline will be the first to operate the A320neo and the airplane with sharklets.

Macht nichts, II: MTU is a partner with Pratt & Whitney on the Geared Turbo Fan for the Mistubishi MRJ, the Bombardier CSeries, Irkut MS-21 and the A320neo but looks to join GE for the new engine for the Boeing 777X.

Odds and Ends: Why aircraft are late; catching up to Boeing

Catching Boeing: Airbus may well have trailed Boeing through the Farnborough Air Show in terms of orders, but it may also be on the way toward catching up. The big PAL order for 54 aircraft was announced this week. A 100-airplane order out of China is due to be announced shortly. Another 100 airplane order from AirAsia appears to be pending. Year-to-date, Boeing has 701 net orders and Airbus has 270 net orders. These three orders still leaves Airbus well short of Boeing, and Boeing has more 737 MAX commitments to convert this year. We expect Boeing to finish the year in first place. It will be interesting to see how close Airbus can come.

NEO firm order wrap: Aviation Week has this detailed recap of NEO firm orders. We expect some of the A320neos to be converted to A321neos as time goes on, just as we expect 737-8 MAX orders to be swapped with 737-9 MAX positions.

The Farnborough Air Show isn’t just about orders, though these get all the sex and headlines.

While we weren’t at the show, we had a telephone interview with a company called Constellium, previously known as Alcan. Constellium spoke at the February conference of the Pacific Northwest Aerospace Alliance, with which we are involved. We were particularly interested in talking with Constellium because it is a major supplier of Aluminum-Lithium, an alternative material to standard aluminum and a competing material to composites.

Constellium’s Al-Li combines other processes, including a design for recycling, and is named AirWare. Airbus, Boeing and Bombardier are among their key customers, and it is Constellium that is providing the materials for the CSeries. It’s also a supplier on the Airbus A350 (internal components, not the fuselage).

As Airbus and Boeing looked at the A320neo and 737 MAX, and as Boeing is looking at the 777X, we asked them about the prospect of using Al-Li. This is lighter than standard aluminum, more durable, less susceptible to corrosion and enabled 12 years between major maintenance overhauls compared with the 6-8 years now.

But Al-Li is more difficult to work with than standard aluminum. Boeing’s Mike Bair told us in an interview that Boeing considered Al-Li back in the 1990s when designing the 777 but it was too difficult and costly to manufacture. Since then, he praised the producers for strides. There are mixed reports what material will be used for the 777X fuselage: standard metal or Al-Li. The Seattle Times reported the airplane will have Al-Li. We’ve been told it won’t. But with the airplane still months and perhaps a year from launch, there is plenty of time to decide.

Airbus, in an interview at the Paris Air Show last year, said it was evaluating Al-Li for the A320neo. The A320ceo is heavier than the competing Boeing 737 and the re-engine adds about 4,000 lbs. Using Al-Li would mitigate some of this weight. We haven’t heard if Airbus might go ahead with Al-Li, but we’re leaning toward concluding that it won’t.

Boeing told us it will not switch to Al-Li for the MAX because the manufacturing process is just enough different that it would add complexity and cost to the current tooling and procedures.

Al-Li vs composites is a competition that will likely be fierce when it comes time for Airbus and Boeing to design the next clean-sheet airplanes, presumed to be the New Small Airplane, or replacement for the current 737/A320 class. (Boeing may have a new clean-sheet for the 757 class; it has a New Airplane Study underway for this, but the market may be too narrow when one considers the 737-9 MAX and A321neo will do 95% of what a 757 can do.)

Composites, selected for the 787 and A350 XWB fuselages and wings, offer advantages over standard metal fuselages that have been well documented and need not be repeated here. But Airbus and Boeing question the efficiency and benefits of down-scaling composites to 737/A320 category airplanes. Boeing apparently became convinced: Jim Albaugh, former CEO of Boeing Commercial Airplanes, said the New Small Airplane would have been composite, but the ability to produce it at a rate of 60 per month remained a challenge. Boeing went with the MAX instead.

Vistagy, a composite manufacturer near Boston, told us nearly two years ago, that the down-scaling challenges were met and that production rates were the issue. Autoclaves are very costly and so is the manufacturing process. There is actually less industrial waste than traditional aluminum manufacturing, but the materials are generally more hazardous—though there have been strides on this score.

This is the background that intrigued us when we had the opportunity to speak with Constellium’s Simon Laddychuk, VP of Manufacturing Global Aerospace and Director of Technology. END_OF_DOCUMENT_TOKEN_TO_BE_REPLACED