Our wrap up of Farnborough would be incomplete without looking closer at the world’s leading engine supplier, GE Aviation, which together with partners (like SAFRAN in CFM joint venture) garnered more than $36 Billion in orders and commitments during the show. This figure was only significantly bettered by Airbus ($75 Billion) and it came close to Boeing’s $40 Billion. With such level of business the claim by GE Aviation CEO, David Joyce, that the Airbus A330neo engine business was not the right thing for GE as they have more business than then they know what to do with, was certainly no case of “sour grapes”.

It starts with the follow-up business to one the world’s most successful Turbofan programs, the CFM56. The LEAP-1B continuous the exclusivity on the Boeing 737 with the 737MAX and the LEAP-1A has now over 50% of the orders for the Airbus A320neo. With the single aisle aircraft selling in record numbers this means CFM International captures about 75% of this the largest airliner market. It leads to deliveries of more than 1500 engines per year from 2017 from the joint venture. There is every possibility that the LEAP will pass the record of 25.000 engines delivered of the predecessor, CFM56. 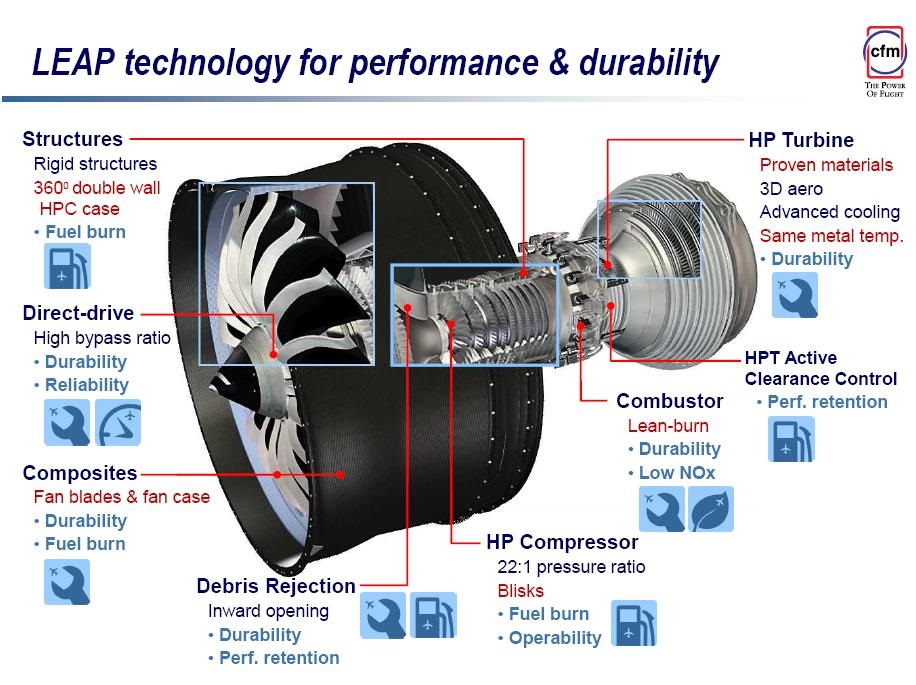 The next program that is running well is the GEnx-1 for the Boeing 787. GEnx is now the leading engine with about 60% market share of the announced engine deals for the 787. Background is a 1-2 % advantage in the fuel consumption on longer missions over present Rolls Royce Trent 1000 variants. The GEnx-1 program has seen some initial problems, one which came as GE changed to a more environmentally friendly grease for the assembly of the engines (low pressure shaft cracking). These initial problems are now under control, the only remaining one to solve being a risk of core engine ice build-up when flying close to humid thunderstorm clouds. This will be solved with a new version of the engines FADEC control software which changes the way the bleed ports after the booster are opened during these conditions.

The top engine program, the GE90, designed for the Boeing 777 is also performing well. After a hesitant (for GE standards) start on the initial variants of the 777 the engine family has developed into a run-away success. GE achieved exclusivity for the stretch programs 777-300ER and -200LR in exchange for a considerable further development of the engine and part financing of Boeing’s development of the airplanes. This bold strategy meant further investments but it turned the GE90 program around, not the least because the GE90-110 and -115 over achieved set goals on several important parameters, the fuel consumption being one. This better than expected engine performance propelled the 777-300ER to a 7% overachievement in payload-range and laid the ground for the success of the variant.

Given this performance and the execution of the GE90 program it was no surprise that GE won the competition over Rolls Royce to be the exclusive engine supplier for Boeing’s new 777 variants, the 777-8X and -9X. The engine, GE9X, continuous GE’s tradition of further refining the direct-drive two shaft architecture, setting new performance standards for the individual components in the process. 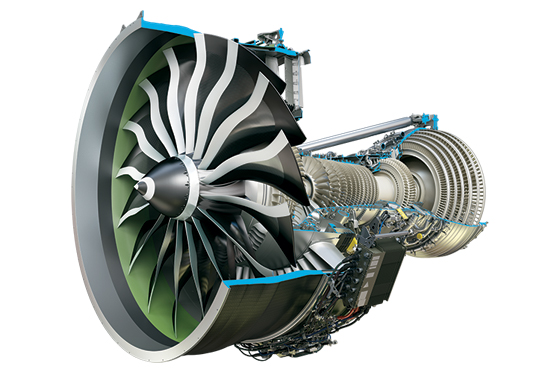 Technologies behind the success

It is instructional to examine the technology of the GE9X to understand how GE has achieved its dominant position in the segments described. Starting from the front, the GE9X continuous GE90’s pedigree of offering higher By Pass Ratio (BPR) than the competition. GE90 was launched with BPR 9:1 when the competing Trent 800 and PW4000 were around 7:1. GE9X will now have a Take-Off BPR of 12:1 by virtue of an enormous 133.5’’ fan. To mitigate the weight impact of these large fans GE has gone to CFRP fans already 1995 with GE90 and followed up with a CFRP fan case from GEnx. The refinement for the GE9X is an even lower fan blade count, going from GE90’s 22 to 16 blades. This reduces fan blockage which leads to higher fan throughput at lower fan pressure ratios. A low fan pressure ratio gives a low specific thrust (see box) which is the premier measure of an engine with high propulsive efficiency.

These compression stages requires a massive amount of shaft horsepower being passed through the two shafts from the back-end of the engine. GE is the leader in material technologies that allows high turbine temperatures and thereby high power output per turbine stage. It introduced CMC (Ceramic Matrix Composites) on the LEAP-1, starting with static parts (the turbine nozzle) and will follow up with more static parts on the GE9X. There were initial talks of employing CMC also on the rotating parts for the 9X (turbine blades) but it is now less clear if this will finally be the case. CMC has the advantage of requiring less cooling air to be tapped from the compressors to stay within acceptable temperatures and as all air tapped from the compressions side will reduce engine efficiency, CMC contributes to the low specific fuel consumption (SFC) for the engines. We also expect GE to start regulating the cooling air to the turbines for these new engines thereby gaining efficiency by virtue of throttling down the cooling flow at cruise power, a technique that Rolls Royce pioneered for civil turbofans on the Trent TXWB.

In our A330neo article covering the Trent 7000 we described the level of air being off-routed from the front part of the engine (up to 20% or more from all compressor parts and including the combustion chamber) for cooling purposes, we also described the weight challenges a direct drive two shaft architecture brings in this article. GE has consequently worked the weight challenge, in the front by employing CFRP for the fan 25 years ahead of its competition; in the rear by using lighter metallic alloys for the low pressure turbine. The low pressure turbines of modern direct drive turbofans are large and therefore heavy as they generate the power to drive 85-90% of the engines thrust trough the fan. At the low RPM that the fan dictates (through the fan blades max tip speed) the low pressure turbines have to be made with multiple large diameter stages (6 for GE90, 9X, 7 for GEnx), classically employing heavy nickel alloys to withstand the high temperatures. The GEnx was the first engine to employ lighter Ti Aluminide blades in the last stages, thereby reducing engine weight with 400 lb, a technique which is also employed on LEAP and GE9X. Through these measures GE engines have remained weight competitive despite the architectures propensity for higher weights.

Through excellence in the described technologies GE has built its position as the leading supplier of turbofans for civil airliners. That this will not continue unchallenged has been made clear by GE losing its market leading role in the small turbofan segment, where GE’s follow up to its successful CF34, NG34 has lost out to Pratt & Whitney’s Geared TurboFan (GTF) for new generations of regional and small single aisle aircraft. This is the first sign that GE and partner SNECMA will have to examine whether the time has come to upgrade the direct drive two shaft to a geared architecture. GE acquired Italian gear specialist AVIO last year, the manufacturer of the GTF gearbox, so there is vital knowledge in-house. Partner SNECMA is also conducting gearbox studies as part of its EU sponsored Clean Sky Open Rotor program, the question is which engine program will trigger going to a geared architecture; Open Rotor or a new ultra high by-pass turbofan for Boeing’s and Airbus new single aisle aircraft? With Boeing likely leading the race with a 757 replacing NSA, a new architecture could be presented from GE / CFM sooner than one think. Should Boeing launch a 757 replacement in the next years GE would certainly have to react and we don’t think an upgraded LEAP would be the answer, if for no other reason then environmental factors.