Note: The following was distributed to our e-mail list December 23. Last week, American Airlines (as predicted) swapped the A350-800s for A350-900s.

The possibility of Airbus launching an A330 new engine option appears to be gaining ground.

Our Market Intelligence tells us that Airbus is considering a decision soon, probably next year, with a target entry-into-service date of 2018.

We identify 37, or 47%, that probably are already at risk of cancellation in favor of the larger A350-900 or A350-1000. These 37 are highlighted in red and pink. Another 10, those for Yemenia, are probably already iffy, according to Market Intelligence. The total of 47 represents 59% of the backlog. We have no information on the remaining customers’ intentions.

GE Aviation is said to be pushing Airbus hard to proceed with the neo, using the GEnx-2B engine now on the Boeing 747-8. The -2B is a bleed air engine, which the A330 requires, while the GEnx-1B used on the Boeing 787 is not. It’s been suggested to us by a source familiar with engines that the Airbus GEnx could be a combination of the 1B and 2B technology, however. Expanding the 2B engine to the A330 would be one way for GE to recoup its development expenses for the 2B, a problematic situation today with the slow-selling 747-8.

Rolls-Royce is also said to be interested in powering the A330neo with its Trent 1000-TEN used on the 787, but like the GEnx-1B, this engine is not a bleed air design and would have to be modified for the A330. Although the Trent 1000 and 1000 TEN have a solid customer base with the 787, the program delays and constant engineering tweaks boosted research and development costs, prompting Rolls to look at new markets for the engine as a way to recoup the over-inflated investment, we are told.

The timeline makes it unlikely Pratt & Whitney could offer a Big Engine version of its Pure Power Geared Turbo Fan. Officials previously have said a Big Engine would not be ready until about 2020.

It’s unclear if the A330-200 would be a candidate for a neo treatment. Customers began demonstrating their preference for the larger A330-300 some time ago, although sales for both aircraft have fallen this year compared with recent years. Airbus wants to keep A330 in production into the next decade, and an A330neo would be the shot in the arm needed to do so.

Airbus’ Leahy told us a year ago that an A330neo would require a significant investment and some major structural strengthening in the body and wings to accommodate the heavier GEnx or RR Trent engines. He also said the neo would require a centerline main gear.

But these considerations are not major obstacles, according to one expert familiar with the challenges. The engine makers would wind up funding about 90% of the development costs, and the A330 is stable mate to the A340 family, which had a centerline gear. This could be incorporated into the A330neo without too much difficulty.

More to the point, an A330neo—even with the investment required—will be a far less expensive airplane to acquire through purchase or lease than the A350-800. Because Airbus sold far more A330s since the 1994 introduction than had ever been dreamed, tooling costs have long since been recovered. This gives Airbus great pricing flexibility.

Rendering the A350-800 superfluous

An A330neo, particularly an A330-300neo, would render the A350-800 superfluous.  A quick analysis back in May by the blogger Aeroturbopower, which follows engines and their benefit to airframes, concluded the A333neo has lower fuel burn per passenger than the A358.

Whatever fuel burn disadvantages an A330neo has to the Boeing 787 will be narrow and Airbus’ ability to shave margin on the capital cost to the customer will more than likely make up most of the difference, if not all of it and provide an advantage.

In the chart below, by our new affiliate in Europe, using typical three-class seating assumptions advertised by Airbus and Boeing, we include a prospective A330-200neo and calculate the percentage differences between the current A330s, the A350-800/900 and the 787-8/9. The A350-1000 and 787-10 are in the next size up and are excluded from this demonstation.

An A330neo will be markedly more efficient than the “A330 Classic” and within 3%-4% of the fuel efficiency of the 787-8/9. This chart demonstrates that the A350-800, at a much more expensive cost to acquire, offers little advantage beyond a significantly longer range. 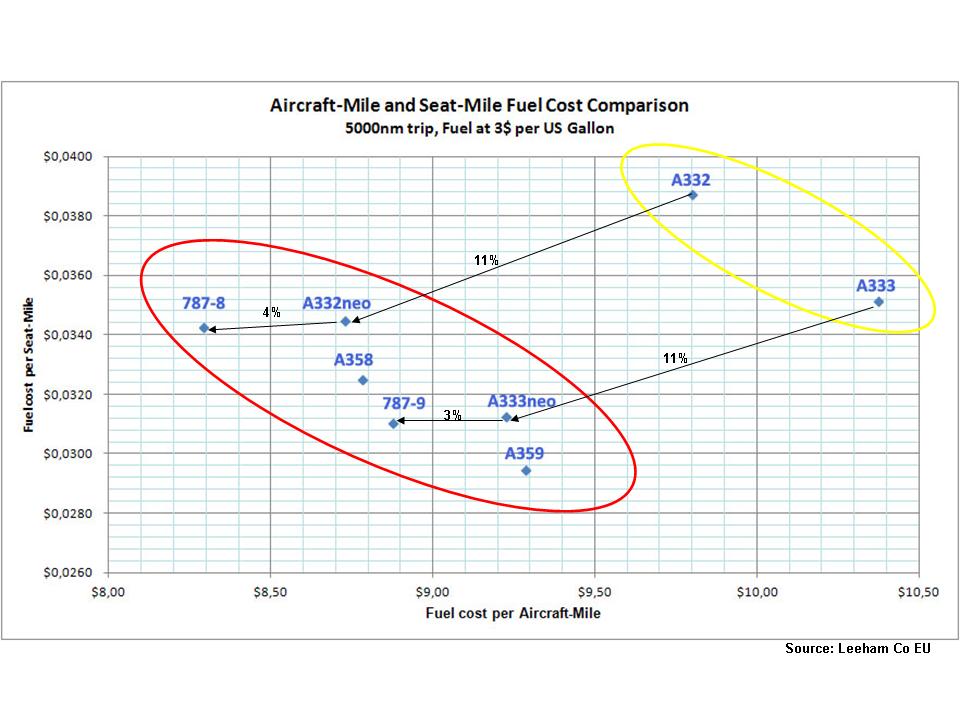