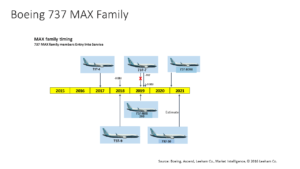 LNC confirmed through its own sourcing Ostrower’s Wall Street Journal exclusive. Our details differ slightly. The 737-7X as outlined to us indicate a two-row growth over the present 737-7 plan, or 138 seats in two class rather than 150. It’s 150 seats in a 31-32 inch pitch (Southwest Airlines configuration).

Importantly, the 7X will be a shrink of the 8 MAX rather than a growth of the 7 MAX. This means mating 8 MAX designs and components to the smaller 7 MAX becomes unnecessary, eliminating design and production issues. A straight-forward shrink involves removing frames from the 8 MAX.

This simplifies things for Boeing, but it’s been well documented that shrinks are not optimal solutions.

The Bombardier CS300, the direct competitor to the 737-700/7 and the A319ceo/neo, has comfortably outsold the re-engined versions. None of them has sold well, however. Airbus and Boeing didn’t really want to build the small, low-margin airplanes and the 737-7 and A319neo don’t match the superior economics of the new, clean-sheet design of the CS300. But Bombardier’s executives had an unrealistic view of the airplane (“If you build it so much better, they will buy it”). Price and commercial terms mattered as much or more than the “better mousetrap.” The sales force, raised and steeped in selling to regional carriers, didn’t understand how to sell to mainline airlines.

All this is changing with the new BBD management.

There are a few customers viewed as never-must-lose by Boeing. United Airlines is one of them. When it looked like BBD was a serious contender to win an order for the C Series, Boeing pulled out the stops to block the deal. The 737-700 was sold for a reported $22m, a record low price these days. But there were other considerations, as LNC reported at the time.

This near-loss caused Boeing to rethink its strategy for the 737-7, as linked above.

Although the commercial 7X may seem an odd strategic move, shifting to a more common production model with the 8 MAX makes tactical sense. Further, a 7X BBJ Boeing 737-700, used for US government transport. A 737-7X would have greater range and, of course, greater economy. Photo via Google images.

will have very long range, around 7,000nm. The US government, which uses the 737-700 for VIP transport, has range limitations with this model. A 7X government aircraft will have long legs.

Pre-dating the strategy shift over the 737-7 is the vexing problem about what to do to replace the aging, out-of-production 757, the so-called Middle of the Market airplane. As essentially defined by customers, this is really a replacement for the 767-200ER/300ER in capacity and range, rather than the smaller, shorter-range 757. But Boeing’s own 787-8 (albeit with much more range) was designed to replace the 767-300ER. Airbus has breathed new life into the A330-200 by dropping the price substantially (the line is fully amortized) and creating a “regional” version with lower thrust and lower weights, largely a “paper” exercise. Then there is the A330-800, the new engine option, that is, like the 787-8, too much airplane for the MOM.

Boeing continues to have challenges developing a business case for an entirely new, clean-sheet MOM airplane. The effort continues, but attention today appears focusing on yet another derivative of the 737.

The “737-10,” as the plane is unofficially known, would be about 230 passengers (vs 220 in the 737-9). Beyond this, little is settled. The aircraft could be a straight-forward stretch with some modifications. But this would fall far short of replacing the 757 or even competing successfully with the A321neo. The airplane would trade capacity for range, and more range is a requirement from customers for a 757 replacement. LNC’s guesstimate is that this 737-10 wouldn’t even have US trans-continental range. Rather, it would be akin to the unsuccessful 737-900 (before the ER version); only 54 of these were sold.

A vastly revamped 737-10, with new wings, a larger engine, taller landing gear, and more, would essentially be a new airplane utilizing only the fuselage and some components. Some estimates place the development cost at $10bn, less than an entirely new airplane, but more than a simple stretch.

But by the time the 737-10 could enter service, the A321neo will have been in service for at least three or four years, if not more. Airbus will have captured most of the market by then and probably wouldn’t be too far off from preparing to launch an A320 family of new, replacement aircraft. This begs the question to Boeing: what’s the point of a 737-10?

Boeing’s thrashing around with a 737-7X and a 737-10 to bolster poor-selling 737-7 and 737-9 illustrates a situation that was unthinkable a decade ago: it’s single-aisle strategy is in disarray.

Despite officials saying over and over and over and over again that the MAX program is well positioned and they are satisfied, the sales numbers say otherwise. Airbus has neatly boxed Boeing in by doing a low cost, low risk modification of the A320 family in the form of the neo. Boeing scrambled to come up with a response. Some former Boeing salesmen term the MAX little more than lipstick on a pig, an unkind description that nevertheless captures the predicament.

Airbus has about 60% of the single-aisle backlog between the two companies, a figure that may vary by a percent or two. A decade ago, Airbus was nipping at Boeing’s heels, but the 737NG family was the market leader.

The A320neo remains slightly behind the 737-8 in economics, but Airbus has creatively figured out ways to enhance the aircraft and increase capacity, coming close to the exit-limited maximum of 189 passengers in the 800/8. Boeing’s answer, the MAX 200, really will only seat about 194 in shoe-horn, single-class configuration after subtracting seats for the required galley carts needed for even bare-bones service. Only one customer, Ryanair, ordered the sub-type.

Ray Conner, the BCA CEO, acknowledged Airbus is kicking Boeing’s butt in the sales between these two airplanes in a Feb. 10 webcast to employees.

Randy Tinseth, BCA VP of marketing, and Dennis Muilenburg, CEO of The Boeing Co., may claim repeatedly the MAX is well positioned, but Conner presents the realistic view. The 737 line is falling short to the A320 line and something needs to be done about it.

However, the 737-7.5 and the 737-10 aren’t the answers. These aren’t even Band Aid solutions. The solution is to redirect the efforts to an entirely new airplane. The current efforts are wasting time, money and resources.