Aug. 3, 2015, © Leeham Co. Mitsubishi is just a few months away from beginning flight testing on the first commercial airplane designed and built in

The 60 passenger turbo prop had its first flight in 1962 and entered service three years later with ANA. Only 182 were built, and it had a surprisingly wide customer base in the primary and secondary markets. Google images has a nice montage of the operators, which spanned the globe.

Japan’s first commercial airliner since the YS-11 is the MRJ-90 by Mitsubishi. Photo via Google images.

The Mitsubishi MRJ 90 as yet doesn’t have wide acceptance. There are about 200 firm orders and about an equal number of options, but the customer base is thin: 100 of the orders and 100 of the options come from the USA’s SkyWest Airlines and 50+50 are from the USA’s Trans States Airlines. All Nippon Airlines orders 15 and Japan Air Lines ordered 32. Air Mandalay ordered six and the new Eastern Airlines, a start-up carrier, ordered 20.

The MRJ is a 2×2 passenger cabin configuration with comfortable 18-inch wide seats. The passenger experience should be similar to the Embraer E-Jet that’s been in service since 2004 and better than the Bombardier CRJ Series, which is a cramped cabin.

The MRJ is two years late. The first flight is now scheduled for October and entry-into-service in 2017. But with the vast majority of the orders coming from US regional airlines that contract for US majors, there’s just one problem: the MRJ-90 exceeds the allowable airplane weight in the pilot contracts permitting regional flying on behalf of the majors. This is under what’s called the Scope Clause.

END_OF_DOCUMENT_TOKEN_TO_BE_REPLACED 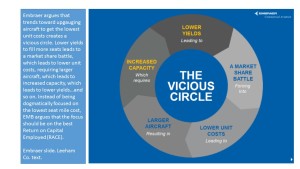 New Metrics for Success takes airlines away from the traditional metric of economics, the Cost per Available Seat mile, and focuses trip costs and the higher quality revenue obtained by limiting the number of low-yield seats on a flight that must be offered to fill larger airplanes. END_OF_DOCUMENT_TOKEN_TO_BE_REPLACED