November 1, 2019, ©. Leeham News: We start the series on analyzing the Lion Air 737 MAX crash by looking at what went wrong in the aircraft. It’s important to understand MCAS is not part of what went wrong. It worked as designed during all seven Lion Air flights we will analyze in this series.

It was a single sensor giving a faulty value that was wrong with these aircraft. How a single faulty sensor could get MCAS to doom the JT610 flight (called LNI610 in the report) is something we look into later in the series. Now we focus on why the sensor came to give a faulty value for five out of seven Lion Air flights and how these flights could be exposed to two different sensor faults.

END_OF_DOCUMENT_TOKEN_TO_BE_REPLACED

One year after Lion Air crash, what’s the MAX’s future in Asia?

Oct. 31, 2019, © Leeham News: One year ago this week, Lion Air flight JT610 went down in the Java Sea near Jakarta. It was the first of two accidents that would expose catastrophic design problems with the 737 MAX – and a regulatory relationship between Boeing and the FAA that had become too close to comfort. 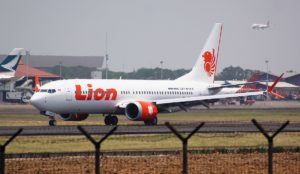 Although much has been written about the US major carriers’ orders for the MAX, relatively little has been said about orders from the Eastern Hemisphere. Prior to the MAX’s grounding, 136 airplanes had been delivered to the region and another 1,186 were on firm order. This comprises nearly 27% of Boeing’s firm MAX orders.

END_OF_DOCUMENT_TOKEN_TO_BE_REPLACED

A year since the Lion Air JT610 crash

October 28, 2019, ©. Leeham News: Tomorrow it’s one year since the crash of Lion Year JT610 into the sea in Indonesia. The aircraft which went down was a brand new Boeing 737 MAX 8 and the world was stunned how such a new aircraft could crash.

The crash triggered the deepest crisis in Boeing’s 100-year history and revealed shortcomings in Boeing’s and FAA’s airworthiness work and supervision. The Lion Air JT610 final report was issued Friday and we now know what happened.

END_OF_DOCUMENT_TOKEN_TO_BE_REPLACED

October 25, 2019, ©. Leeham News: To better understand what went wrong in the Boeing 737 MAX crashes I have over the last half-year run Corner series around aircraft Pitch stability and Aircraft Flight Control systems and how these attack the problems of today’s airliners need for stable characteristics over a very wide flight envelope.

With this as a backgound, we will now in a series of Corners go into the Lion Air final crash report which is issued today, to understand what happened and why.

END_OF_DOCUMENT_TOKEN_TO_BE_REPLACED

Unlike the hour-long hit piece on the 787 several years ago, undertaken with questionable tactics, this one is well done.

See the report below.

END_OF_DOCUMENT_TOKEN_TO_BE_REPLACED

At least this is my view.

But some aerospace analysts I spoke with over the weekend are split. Some believe Friday’s action by the Boeing Board of Directors “stripping” (as most media headlines and stories positioned it) the chairman’s title from Muilenburg, while his retaining the president and CEO titles, is the first step in easing him out the door next year. This is my view, too.

Muilenburg also remains on the Board.

Others think handing the non-executive chairman’s title to lead director David Calhoun is actually an effort to save Muilenburg’s job.

Here’s the divergent thinking. None of the analysts wanted to be identified because by investment bank policy, their remarks hadn’t been cleared for quotation and none had yet issued research notes in reaction.

END_OF_DOCUMENT_TOKEN_TO_BE_REPLACED END_OF_DOCUMENT_TOKEN_TO_BE_REPLACED

Pontifications: The elephant in the room

There is no telling when the airplane will get FAA approval to return to service. According to some news reports, Boeing will hasn’t turned

over the MCAS revisions to the FAA for review, testing and approval.

The acting administrator of the FAA said he expects the MAX to be back in the air by the end of the year. Some leapt to the conclusion this means December—and it may, but let’s remember September, October and November are before the “end of the year,” too.

There’s no telling how other global regulators will act, and when, to conduct their own review and approvals. Airlines would like a global action. It’s tough to tell customers one country sees the airplane as safe but others don’t.

END_OF_DOCUMENT_TOKEN_TO_BE_REPLACED

Pontifications: Compensation claims against Boeing beginning to ramp up

May 27, 2019, © Leeham News: Airlines are increasingly going public with desires to be compensated by Boeing for the grounding of the 737 MAX.

Norwegian Air Shuttle and Spice Jet said shortly after the MAX grounding March 13 they were going to seek compensation from Boeing.

Air China has asked for compensation, reports Reuters. Other airlines with grounded MAXes are also beginning to notify Boeing about compensation claims.

Compensation for delivery delays is also a risk to Boeing. This already has reached $1bn, one aviation lawyer estimates, and stands to climb by billions more, depending on how long new deliveries are delayed.

But Boeing is preparing to take a preemptive defensive move against these latter claims.