Based on a true story, the movie is about the US Navy’s first African American fighter pilot (at the time, “Negro”). The timeline is the Korean War. 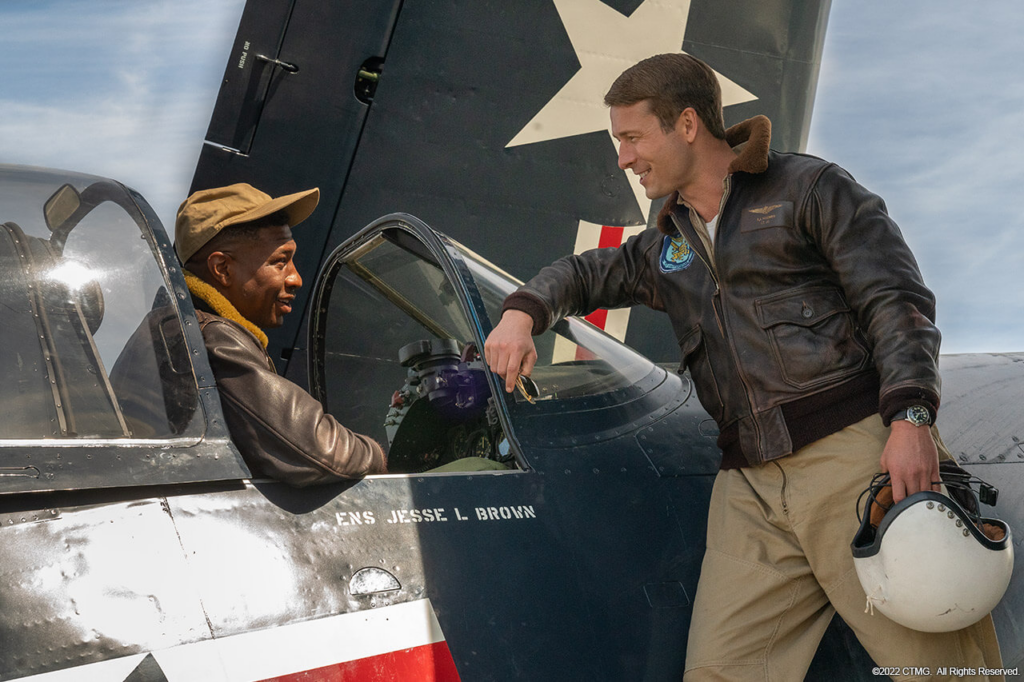 Jonathan Majors and Glen Powell are the lead male actors. Majors was in eight movies before Devotion. Powell appeared in Hidden Figures, about the first African Americans (in this case, all women) employed by NASA. Powell portrayed John Glenn, the USA’s first astronaut to orbit the Earth.

Majors portrays Jesse Brown, the African American. Powell portrays Tom Hudner, who becomes Brown’s closest friend in a squadron that unsurprisingly for the era has its share of bigots.

The movie was made by Black Label Media, founded by Molly Smith, the daughter of FedEx founder Fred Smith. He helped finance the picture. Black Label produced Only the Brave, a movie about smoke jumpers in Arizona who were killed fighting a wildfire; and Sicario, the Day of Soldado.

Devotion takes us through Brown’s sprinkles of his family life, early days in the Navy and his efforts to qualify as a fighter pilot. A talented pilot, Brown initially had some difficulty qualifying for aircraft carrier operations (he was the first nor the last). His heroic actions on a mission over North Korea are followed by his crash landing, trapped in his airplane. He survived the crash landing. Hudner, his wingman, makes a wheels up landing to try and free Brown from the burning wreckage.

Airplanes also are stars in this movie and there is a local connection to Washington State and Oregon.

The story is compelling and so is the flying. If movie goers liked Top Gun: Maverick for the use of real airplanes and real flying over Washington State’s Cascade Mountain range, they’ll love Devotion. The planes are Korean War era Corsairs and even a Mig jet. All are real and the flying through the Cascades is real, too.

The flying is as exciting as the story is compelling. Rating: Four Stars.