November 14, 2021 © Leeham News: Airbus made a splash on the first day of the Dubai Air Show, announcing a firm order for 255 A321neo family aircraft from the Indigo Partners portfolio of airlines.

This is the first large order for single-aisles since COVID-19 struck early last year, comprising 226 A321neos and 29 A321XLRs.

Indigo Partners, headed by airline veteran Bill Franke, is an Arizona-based private equity firm with stakes in several low-cost carriers around the world. Franke was present at today’s announcement along with the chief executives of all four airlines, two of whom joined the event virtually.

The airlines included in today’s order are US-based Frontier, Mexico’s Volaris, Chile’s JetSmart, and Central European giant Wizz Air. Joint orders like this are relatively uncommon except from multi-carrier conglomerates like Lufthansa Group or IAG. Indigo’s last joint order was for 430 A320neo family aircraft, announced at the 2017 Dubai Air Show.

END_OF_DOCUMENT_TOKEN_TO_BE_REPLACED 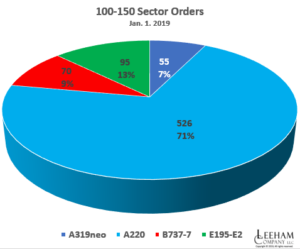 Based on the announced orders at Jan. 1, Airbus has a 78% share of the 100-150 seat sector following the combinations.

END_OF_DOCUMENT_TOKEN_TO_BE_REPLACED

May 28, 2018, © Leeham News: Bombardier and Airbus may clear regulatory approvals next month, allowing for consummation of the latter’s acquisition of 50.01% of the CSeries program.

If all works, this will be well in advance of the Farnborough Air Show that begins July 15. Industry eyes will be on the FAS to see what orders might be announced by

Airbus for the CSeries, which reportedly may be renamed the A210 and A230 for the CS100 and CS300 respectively.

As May fades to June, Bombardier has beefed up its skyline quality, but there are some orders that are in doubt, including a big one for 40 airplanes.

END_OF_DOCUMENT_TOKEN_TO_BE_REPLACED

Pontifications: USA to the World: “We want to fly everywhere. Period.”

I haven’t weighed in on the current battle between the Big 3 US airlines and the Big 3 Middle Eastern carriers because it’s largely beyond the scope of LNC. But I like commercial aviation history, so I thought I’d bring up a little.

In the era immediately post-World War II, when third, fourth and fifth freedom rights were being negotiated between the US and the Rest of the World, there was a member of Congress, Claire Luce Booth of Connecticut, summed it up nicely: “American postwar aviation policy is simple. We want to fly everywhere. Period.”

END_OF_DOCUMENT_TOKEN_TO_BE_REPLACED

Frontier sold to Franke group; what of Republic CSeries order?

It had become one of the worst-kept secrets: Indigo Partners, the investment group managed by Bill Franke, former CEO of America West Airlines, has purchased Frontier Airlines from Republic Airways Holdings.

Franke’s Indigo bought controlling interest in Spirit Airlines and transformed it into an Ultra Low Cost Carrier. Indigo sold its shares months ago and Franke and an associate resigned from the Board of Directors, and from then on speculation was rife Indigo was gearing up to buy Frontier. Frontier CEO David Siegel has been transforming Frontier into an ULCC, but Franke is likely to take to concept further.

Republic was the launch customer for 40+40 Bombardier CSeries, Inevitably, questions will arise over the future of these orders, since these were assumed to be for Frontier.

Our information is that Republic has plans for these airplanes apart from Frontier.

Odds and Ends: 787 Developments on ELT, Production; Frontier as a ULCC

787 Developments: There have been a flurry of developments late Friday on the Boeing 787.

First, it emerged that Boeing’s Charleston plant will not reach a production target of three per month by the end of this year as Boeing repeatedly said. The Charleston Post & Courier first reported the story, and the Puget Sound Business Journal picked up on it Friday.

We weren’t surprised by this because (1) we’d been hearing rumblings for months that progress at Charleston was less than Boeing was suggesting publicly and (2) we got a call from the Post & Courier reporter a week ago perplexed by Boeing’s response when he made inquiries. And to us, this is the most bizarre part of the entire story. Boeing’s official response was quite snarky:

“If anyone was under the impression that Boeing South Carolina would be at three per month by the end of this year, they didn’t understand what we’ve been saying about the surge line in Everett helping us to meet the program-level rate as the facility there comes up in rate. That’s been our message for a long time now,” the Boeing Charleston spokesperson told the P&C and Everett told the Business Journal (via two different spokespersons).

This was really quite a pissy official statement from Boeing.

When the P&C presented Boeing with Boeing’s own statements from last year pledging a 3/mo production rate at Charleston, the Corporate Communications people had to backtrack. Steve Wilhelm at the Business Journal wrote:

After conferring with her colleagues, presumably in North Charleston, [Lori] Gunter (Boeing Everett) issued this statement:

“The 787 program is on track to reach a total production rate of 10 airplanes per month by the end of 2013. This rate will be accomplished by combining the results of the Everett Final Assembly Line, the Boeing South Carolina Final Assembly Line and the Temporary Surge Line in Everett. Boeing South Carolina is expected to reach a production rate of three airplanes per month in 2014.”

This is an embarrassing display from Boeing.

Since the surge line had been put over to rework, we wonder its current status.

Second, The Wall Street Journal, followed by The Seattle Times, reported that Canada’s regulators are about to issue an Airworthiness Directive concerning Honeywell’s Emergency Locator Transmitter; and that there was a part that should have prevent the ELT from overheating in the event of a short circuit.

Pricing the 777X: The Wall Street Journal has an article about Boeing’s challenge of pricing the 777X. It’s via Google News, so it should be available to all Readers.

MIRAMAR, Fla., July 29, 2013 (GLOBE NEWSWIRE) — Spirit Airlines, Inc. (Nasdaq:SAVE) announced today the public offering of 12,070,920 shares of common stock by certain existing stockholders affiliated with Indigo Partners LLC (“Indigo”). Upon completion of the offering, investment funds affiliated with Indigo will no longer own shares of common stock of Spirit Airlines. The company will not receive any proceeds from this offering. Barclays is acting as the sole underwriter for the offering.

The shares of common stock are being offered pursuant to the Company’s existing shelf registration statement filed with the Securities and Exchange Commission (the “SEC”) on July 31, 2012. A final prospectus supplement describing the terms of the offering will be filed with the SEC and, when available, may be obtained from the SEC’s website at www.sec.gov or from Barclays Capital Inc., c/o Broadridge Financial Solutions, 1155 Long Island Avenue, Edgewood, NY, 11717, Telephone (888) 603-5847 or by e-mailing Barclaysprospectus@broadridge.com.

In connection with the offering, the Company also announced that Messrs. William A. Franke and John R. Wilson have informed the Company that upon completion of the offering, they expect to resign as directors at the next board meeting, presently scheduled for August 7, 2013. Upon Mr. Franke’s resignation, the Company’s board intends to elect Mr. H. McIntyre Gardner, a director since 2010, as Chairman of the Board.

Washington State air facilities that could close with sequestration

The FAA has released a list of air traffic control facilities that could close with Sequestration, which is due to take effect March 1.

The following facilities in Washington State are on the list:

Additionally, the over night shifts in the following control towers are at risk:

There’s clearly huge demand for the 787. There was a lot of excitement about it, but Boeing was heavily promoting the 747-8, for which the company is certainly seeking more orders, with few orders for the passenger version and the air freight market being very weak. To date, the majority of orders for that airplane have been freighter orders. This is a relatively small program, but we think it is the most difficult within Boeing’s portfolio right now. …[Y]ou’re probably not going to see the growth that Boeing had once hoped for there. That’s certainly how we have been making assumptions, as well.

Alaska, Frontier and Competition: The Centre for Asia Pacific Aviation has this analysis about Alaska and Frontier airlines, which aside from being a little geographically-challenged, is one of CAPA’s usual well-researched and thought-0ut looks at airlines. (In fairness, CAPA often strays from the Asia-Pacific, but we couldn’t resist the quip.) CAPA now actually calls itself Centre for Aviation.

A380 Repair Costs: Aviation Week has this article detailing the costs to Emirates Airlines for repairs to the Airbus A380 wing bracket cracks.

Boeing Labor Challenges: Boeing seems headed for war again with labor unions. Here’s an article from The Everett Herald with several links within it; one from MyNorthwest.com about SPEEA; and one from The Seattle Times about SPEEA.

There are still a number of customers who have not ordered either aircraft. US Airways has been exclusively an Airbus customer. Airbus lost a hard-fought battle to Boeing in the competition for the A321-737-900ER order. ILFC orders seem to be on hold pending its Initial Public Stock offering.