29July 2016, ©. Leeham Co: In last week’s Corner we discussed the power of the eye versus other senses of the human body. If one provides the eye with a convincing visual scenario, it can override many other senses that tell the brain another story.

When flying in bad weather, there is nothing in the human body that helps us to say which is up or down. Gravity should do it, you say, with the inner ears balance organ and the bums pressure situation telling us if we are up or down. Not so sure! It is very easy to slowly enter a yawing downward spiral which produces a perfect 1G force straight downwards in the aircraft, telling our brain we are doing just fine.

Birds can’t fly in clouds for the same reason we can’t, at least not without aids. The standard aid is the artificial horizon, Figure 1. 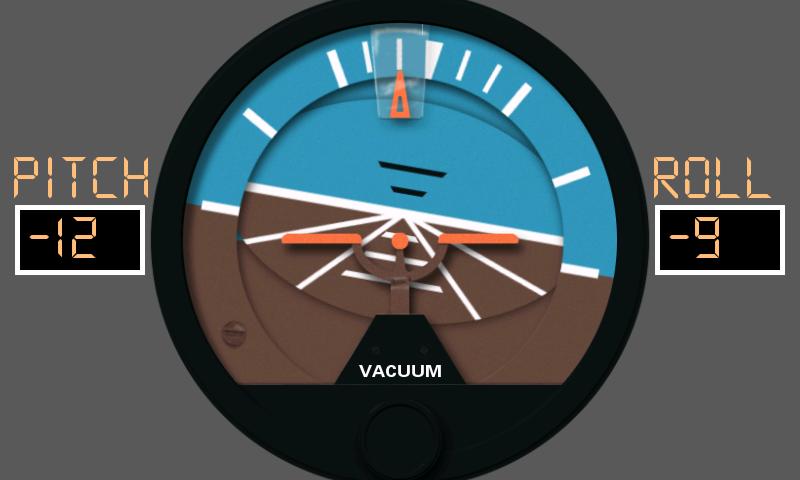 I choose the picture because it shows the problem with an artificial horizon well. Tell me what is happening in the picture? The orange bits in the middle is the aircraft. Is the horizon leaning to the right or the aircraft to the left?

One can gradually intellectually understand that a horizon does not lean so the aircraft is rolling left. But it is not a very intuitive tool to understand what is happening. Let’s now see what happens when we make the horizon more real.

In Figure 2 we have the same situation as in Figure 1. 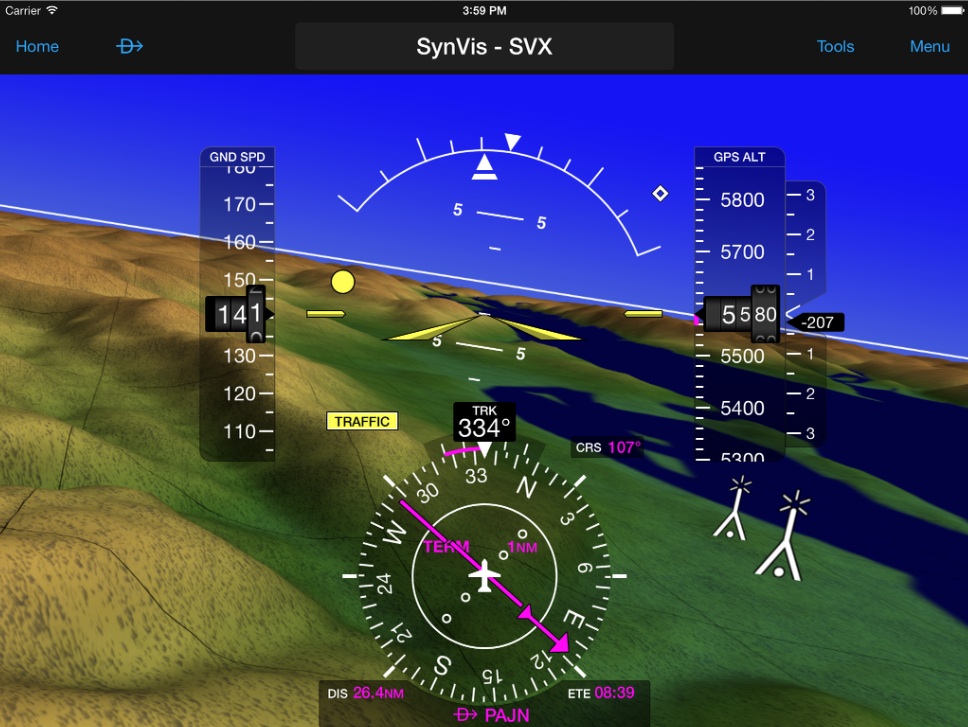 Now you tell me if the horizon is leaning right or the aircraft is on a (slightly downward) left turn. For anyone who has trained in an aircraft, there is no doubt. The aircraft is in a descending left turn. It is not intuitive that the pictured horizon should be leaning; it is against all we know since we could see.

Figure 1’s horizon is less clear. It does not reference anything we have experienced that we could see. It requires intellectual thinking and lots of training to always be interpreted correctly. This training shall also work when we are in panic mode because things have gone pear shaped. We know from the accident reports it doesn’t work out in too many cases.

The example shows why the addition of a picture of the surrounding world is so important when flying in bad weather. It doesn’t have to be the real world seen through the windows/canopy. It can be a synthetic copy which is good enough and presented on the Primary Flight Display (PFD) or the Head Up Display (HUD).

The avionics companies have been working on this for the last 20 years and the first Synthetic Vision system was offered on the Gulfstream Business Jet in 2009. Today, virtually all avionics manufacturers offer it as part of their Primary Flight Displays.

It is used for Business jets and General Aviation aircraft. Figure 2 is actually Garmin’s iPad flight planning app (Electronic Flight-bag app) where one can put the iPad in the aircraft and couple it to a cigarette pack sized ADS-B receiver which has an artificial horizon reference built in. The app plus receiver including functioning Synthetic Vision based PFD presentation/database cost around $1,000. Add an iPad mini and you have spent $1,500 to get complete pre-flight planning support and Synthetic Vision during your flight with all the maps, charts and weather you need. There are several suppliers of EFB that offer this combination, ForeFlight EFB with Stratus receiver is another example.

So not only is Synthetic Vision available, it’s available at bargain cost levels. The example is only usable for light aircraft but for transport class aircraft there are certified avionics solutions for less than $15,000.

The functionality I described is available and used in General Aviation aircraft and Business jets. It is used there to improve the pilot’s situational awareness. He has a much better grip on where he is and how the terrain looks around him with Synthetic Vision instead of the classical artificial horizon display.

Yet I have not seen it in a commercial airliner. Why? The presented Synthetic Vision is a system which is non redundant and has no self monitoring to tell the pilot when he can no longer trust what he sees. This is required for using Synthetic Vision PFDs as a certified landing aid.

With this included, it leads to improved minima for ILS and LPV approaches. Both Honeywell and Rockwell Collins have such systems and they have been working with the authorities for years to certify them. But no commercial airliner aircraft OEM has introduced Synthetic Vision into their cockpits?

Why? It’s available and used elsewhere in aviation. We will dig deeper into why no airliner is equipped with Synthetic Vision in next week’s Corner.