Russia’s Irkurt claims its MC-21 mainline jet, a direct competitor to the Airbus A320/321neo and Boeing 737-8/9 MAX, will be some 10% more economical. Irkut claims the MC-21 will be up to 23% more efficient than the current engine-powered Airbus and Boeing products.

Thanks to a reader who is at the MAKS air show, we received this photo from a slide presentation. Although others may have seen this information before, this is the first time we have. 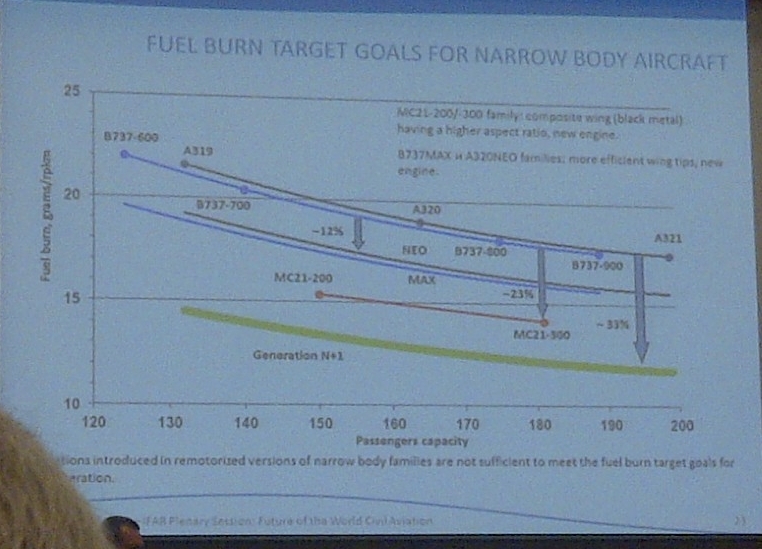 In other news, Boeing and Canada’s WestJet announced a letter of intent for 65 737 MAXes: 25 MAX 7s and 40 MAX 8s. This will enable WestJet to expand and replace its 737 NG fleet. Delivery begins in September 2017, making WestJet one of the first operators.

Bombardier scored a huge deal at the Russian air show, MAKS, with a letter of intent for an order for up to 100 Q400 turbo-props.

The Q400 has been trailing rival ATR, which is half owned by Airbus parent EADS, for the ATR-72 turbo-prop, by a wide margin in recent sales. ATR recently obtained third-world, gravel runway certification for its airplane.

The BBD deal includes the potential of establishing a second Q400 assembly line in Russia. The BBD deal is for 50+50 and isn’t expected to be completed until next year.

Bombardier has been making a major effort in Russia, placing used CRJ regional jets there, previous orders for the Q400 and an order for 32 CSeries. It’s also signed an agreement to explore customer support services for the Irkut MC-21 150-212 seat mainline jet.

SuperJet 100: This airplane, which is basically the old Dornier 728 jet design, was supposed to be Russia’s leap to western standards. It hasn’t worked out that way, according to this article.

Cell Phones on Airplanes: There continues a debate over whether cell phones really have to be turned off for take-off and landing. This finally explains the technical issues of the cell phone and other electronic devices.

787 Real Time Monitoring: NPR (the national public radio in the US) has this report about Boeing’s real-time monitoring of the worldwide 787 operations.

Crikey: The ever-direct (and cranky) Ben Sandilands weighs in on the Airbus-Boeing advertising tiff.

END_OF_DOCUMENT_TOKEN_TO_BE_REPLACED

E-190 v Superjet v Bombardier: With the finding that the pilot of the demo flight of the Sukhoi SSJ 100 Superjet simply flew into a mountain in Indonesia, rather than there being a problem with the airplane, the cloud has been lifted from the aircraft. So the direct match-up of the SSJ vs the Embraer E-190 can now be compared and this article does so. Bombardier’s CRJ-900 and CRJ-1000 also compete.

China’s Aviation: Airbus and Boeing think China pose the greatest threat in the future, but this analyst is less enthusiastic.

WestJet of Canada: The low cost carrier took a bold step to order up to 45 Bombardier Q400s to feed itself. Now it’s using speed dating to decide where to fly the airplanes.

Odds and Ends: Why aircraft are late; catching up to Boeing

Catching Boeing: Airbus may well have trailed Boeing through the Farnborough Air Show in terms of orders, but it may also be on the way toward catching up. The big PAL order for 54 aircraft was announced this week. A 100-airplane order out of China is due to be announced shortly. Another 100 airplane order from AirAsia appears to be pending. Year-to-date, Boeing has 701 net orders and Airbus has 270 net orders. These three orders still leaves Airbus well short of Boeing, and Boeing has more 737 MAX commitments to convert this year. We expect Boeing to finish the year in first place. It will be interesting to see how close Airbus can come.

NEO firm order wrap: Aviation Week has this detailed recap of NEO firm orders. We expect some of the A320neos to be converted to A321neos as time goes on, just as we expect 737-8 MAX orders to be swapped with 737-9 MAX positions.

A new study released today by AirInsight concludes the oft-maligned 100-149 seat market is viable, and not a ‘Bermuda Triangle,’ if the right airplane is developed to compete within it.

Some aerospace consultants, analysts and observers–as well as Boeing’s Randy Tinseth, VP-Marketing–term the segment a Bermuda Triangle because of airplane “failures” in the market. But the fact is that except for Embraer’s E-Jet, the poorly-conceived British Aerospace/Avro Jets and Bombardier’s pending CSeries, there hasn’t been a clean-sheet design since the 1960s. All other aircraft have been derivatives of older designs and offerings of weak and dying manufacturers.

We need to add the Sukhoi Superjet SSJ100 to the clean-sheet design list, but this falls into the weak OEM category.

Today there are six aircraft types and 15 sub-types from five OEMs. (There were seven and 16 until Tuesday, when Boeing finally dropped the 737-600.)

Here is a run-down.

END_OF_DOCUMENT_TOKEN_TO_BE_REPLACED

Update, 8:30 PDT: If anyone thought Airbus’ John Leahy doesn’t have some orders up his sleeve, get a gander at this from Reuters:

Airbus sales chief John Leahy was in typically combative and upbeat form: “The party’s over?. Why, it’s only the second day of the show, for heavens’ sake,” he said of suggestions orders were drying up. “We’ll have some important announcements.

Another reason we’re glad we didn’t waste our time and money going this year: a dearth of activity.

Perhaps the biggest news: Boeing finally has released the weights and ranges of the MAX. From the Boeing press release:

Comparative* maximum take off weights and range limits for the Next-Generation 737 and 737 MAX:

It’s always dangerous jumping to conclusions about an airliner crash within hours or days after an accident, but the speculation began very quickly after the Sukhoi Superjet went missing yesterday in Indonesia.

Despite the demographic of the passengers on board, Russia floated the possibility the aircraft had been hijacked. This seemed an incredible possibility given the passengers were made up of airline executives, journalists and members of the Indonesian aerospace industry.

The facts, though sparse, seemed to parallel other accidents throughout aviation industry over the decades. The captain of the flight asked for clearance to descend to 6,000 ft from 10,000 ft in a mountainous area where peaks were 6,200 to 7,000 ft (reports varied). It wasn’t clear what the weather was at the time the airplane disappeared, but searches were suspended later in part because of fog.

Descending to an altitude below the mountain tops suggests that CFIT (and pilot error) might be involved. CFIT stands for Controlled Flight Into Terrain.

But the altitude of the crash site was reported to be around 5,800 feet, slightly below the clearance. Does this suggest equipment malfunction? Or did the pilot “break” altitude, a not unknown occurrence.

If weather was a factor, might there have been wind shears at play?

What does this accident do to Sukhoi’s reputation? This column concludes it is destroyed. We aren’t ready to agree with that.(Update, 9:30am PDT: The headline on the column has been changed to suggest there is now an “operational risk” to the program as opposed to the program being “destroyed.”) (Update, 3:30pm PDT: Now the headline is about “reputational risk….”)

If this turns out to be pilot error or a weather-driven accident, why should the plane’s reputation suffer? If it is an equipment failure, a lot of Western equipment is on the aircraft and perhaps the fault might lie there.

What do readers think?