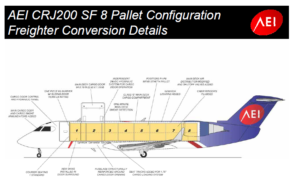 “We started off three years ago in an area we were not familiar with” Convey said of regional aircraft and freighters. “We saw a gap between [AEI converting] the 737-400 and the 737-800. We needed a bridge.”

Convey said AEI approached Bombardier with the idea of converting CRJ200s to freighters. There were about 1,000 airplanes to serve as feedstock. Values were scrap, mainly in the engines. Payload is 15,000 lbs, range is 1,000 miles and there is a growing fleet of FanJet Falcons, Douglas DC-6s, Convair 580s and British Aerospace ATPs that are aging.

These factors combined to provide the basis for orders than AEI expected.

“I didn’t know any of these guys,” he said. “They don’t go to ISTAT,” or any of the other events AEI typically attends. But as he investigated, the factors outlined above and coming to an understanding of the market built the business case.

“We booked 45 orders during the development cycle and we’re booking more every day,” Convey said.

Customers include the IFL Group in Michigan, a Falcon-CV580-727 operator for FedEx; TSM in Mexico, which flies for DHL; Airest in Estonia, a Saab 340F operator; and AvMax in Canada, which has a large fleet of CRJs and Dash 8s, providing dry lease and ACMI services.

“There’s global penetration and there’s a lot of interest in the US,” he said.

The conversion program for the Boeing MD-80 has been a disappointment. There have only been 10 with three more orders. By the time the STC was received, the 737-400 became available at attractive prices. The fuselage is common with the 727, meaning containers are common. The narrower MD-80 fuselage requires a different container.

Convey sees two or three MD-80 P2Fs per year for a few years.

The 737-800 P2F is the next program, with certification expected this year. Convey sees the 737-900 (Standard) as the next opportunity. Some of these are beginning to trade, but prices are still a bit on the high side.

8 Comments on “CRJ-200 an unexpected success in P2F market”