Feb. 17, 2015:  Tax breaks and job guarantees: Boeing’s two largest unions in Washington State appear to be making headway this legislative session to get a bill on the floor for a vote that would retroactively tie 2013 tax breaks to a guarantee of jobs.

It’s less likely that the legislation will include a minimum wage component.

The tax breaks, hastily approved by the Legislature in November 2013, provided for $8.7bn in tax breaks to 2040 in return for Boeing locating the 777X assembly line and wing production in Everett (WA). The tax breaks are not only for Boeing, but available across the supply chain.

But there were no job guarantees, SPEEA and the IAM 751 warned legislators, and without them in the bill, they predicted Boeing would move jobs out of state. 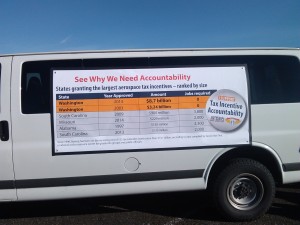 Click on photo to enlarge into a crisp view. Photo by Scott Hamilton.

On Monday, the two unions, in a press conference overlooking Renton Airportwhere the 737s are assembled, pointed out other states include job guarantees but twice Washington failed to do so.

There were no job guarantees with the 2003 $3.2bn in tax breaks approved to win the 787 assembly line. Additionally, there was nothing in the legislation to prevent Boeing from either moving the 787 line to another state, or locating a second 787 assembly line elsewhere. In 2009, Boeing announced it would located 787 Line 2 in Charleston (SC). The company has used the threat of locating the 737 MAX and 777X lines elsewhere to gain more tax breaks and other concessions from Washington State, and the IAM 751.

Since the 2013 tax breaks were approved, Boeing has moved around 7,000 jobs out of state to other Boeing facilities. Other states included a jobs-for-breaks guarantee, and the unions charged Boeing is getting breaks from Washington then taking these jobs to another state to get tax breaks there.

They also said some of the other states include a minimum wage component in their tax breaks for high-paying jobs.

The job guarantee proposal has bi-partisan support in the Washington Legislature, say union officials. The wage component is opposed by Republicans, who control the State Senate.

The Inland Northwest Aerospace Consortium (INWAC), which represents the state’s second largest aerospace cluster in Spokane, opposes the legislation. INWAC says approval will prompt new and existing businesses to look to another state.

New airline analysis blog: There is a new blog devoted to airline analysis called SkyWriter Aviation. Unlike other blogs that are written by journalists or analysts, this one comes from someone who worked for the airlines (Continental) and the industry (Boeing).

← Regional operations with the Turboprop, propjet or Jet; Part 2.
Bombardier’s crisis of confidence perhaps the biggest challenge for CSeries →