23 October 2015, ©. Leeham Co: In last week’s Corner, we went through how Airbus can offer an Ultra Long Haul (ULH) aircraft to Singapore Airlines by increasing the Maximum Take-Off Weight of its A350-900, increasing the tankage and lower the payload. There are a couple of other considerations when extending the range of an aircraft that we did not touch upon. For completeness, we go through them here.

When increasing the allowed weights (really, masses) of a certified airliner, there are a few things that need to be re-evaluated and perhaps modified. First of all, the airframe needs to withstand the higher loads caused by the higher weights. Secondly, the aircraft’s field performance will be affected by higher weights. Required take-off field length must stay within usable limits, as must landing performance.

If the increase in flying weights are significant, it will also require a check on what happens to the aircraft’s flight profile when fully loaded. A heavier aircraft will cruise at lower flight levels and the One Engine Inoperative (OEI) service ceiling will diminish.

We now go through these additional areas and evaluate their impact on overall aircraft performance in general and on an A350-900ULR in particular.

Last week we saw that by increasing the Max Take-Off Weight (MTOW) by 12 tonnes to 280 tonnes, decreasing the payload and increasing the max tankage, the A350-900 could be transformed from a Long Haul aircraft to an Ultra Long Haul (ULH) model, Figure 1. 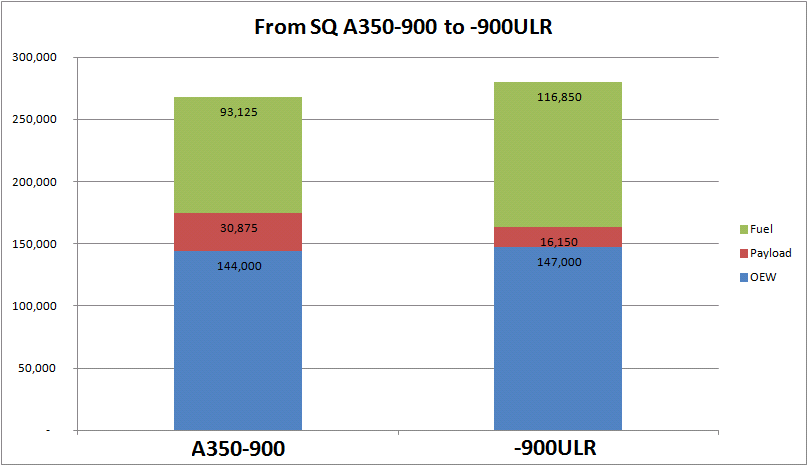 We focused on how to reach the endurance necessary (up to 19 hours) to reach the US West Coast and New York area reliably from Singapore. We will now go through the other areas Airbus needed to look into before it could offer the variant to Singapore Airlines.

The most obvious area is the extra structural loads that will be imposed on the aircraft when weights increase. In the case of the A350-900ULR, there are a number of factors that minimize the structural consequences of making a ULR from the standard A350-900.

What has been increased is the aircraft’s fuel fraction weight. When the fuel increase is confined to the standard wing tanks (i.e. no cargo bay tanks are needed), the fuselage will not be affected. Figure 2 shows the fuel system for the A350-900. 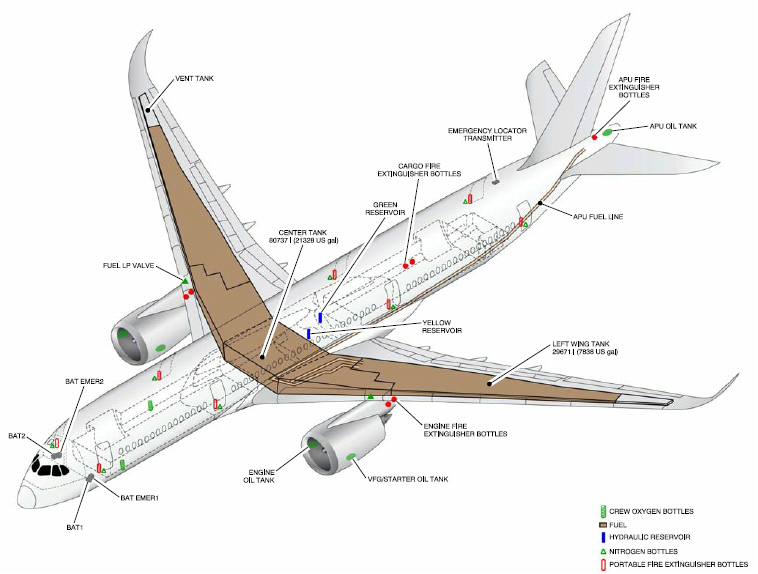 There are wing tanks and a center tank. Fuel increase in the wing tanks stresses the aircraft at a minimum, as the weight increases where the lift is generated. Therefore, additional bending moments in the wings are minimized. Fuel level increases in the center tank will cause higher bending loads on the wing. A gust will push up the wing halves and the center fuel weight will act like a weight that does not want to follow the movement.  There will be increased stresses in the wing-root area.

Weight increase in the fuselage is worse still as the increased load has to be transported from the fuselage area where the load originated to the wing halves where the increased lift needed to counterbalance the load is generated. For the A350-900ULR, Airbus increases the fuel in the wing (not clear where, but most likely in the center area, as this is the tank that an OEM fills up last for the reasons we just discussed).

At the same time, the payload, which is placed in the fuselage, is decreased, see Figure 1. This lowers the stresses in the wing-root area; one says that the wing-bending moment is lowered.

An OEM controls how much can be loaded in the fuselage with the Max Zero Fuel Weight (MZFW). It limits the maximum payload that can be taken onboard. It could well be that the A350-900ULR has a lower MZFW than a standard 268t version for the above reasons. It would not limit its usefulness, as the aircraft is specially configured to fly with a low payload.

We now assume that center fuel tank is filled to a higher level, which increases the wing bending moment. By lowering the MZFW, Airbus can regulate the max wing bending moment of the -900ULR to be at the same level as the standard version despite having a higher MTOW. This technique can be seen at work in the different weight variants that Airbus has available for its aircraft. There are higher MTOW variants that have lower MZFW and vice versa.

Other areas that get affected would be the landing gear and the aircraft’s brakes. Structurally a landing gear often has margin for a modest weight increase, 4.5% in this case. Increased brake load in case of a rejected take-off is more critical. We will now discuss this and the other aspects of take-off and landing performance when the aircraft has a higher take-off mass.

The A350-900 take-off performance diagram in Figure 3 tells us what MTOW we can have for different airport runway lengths and altitudes on an ISA +15°C day i.e. 30°C/86° Fahrenheit. 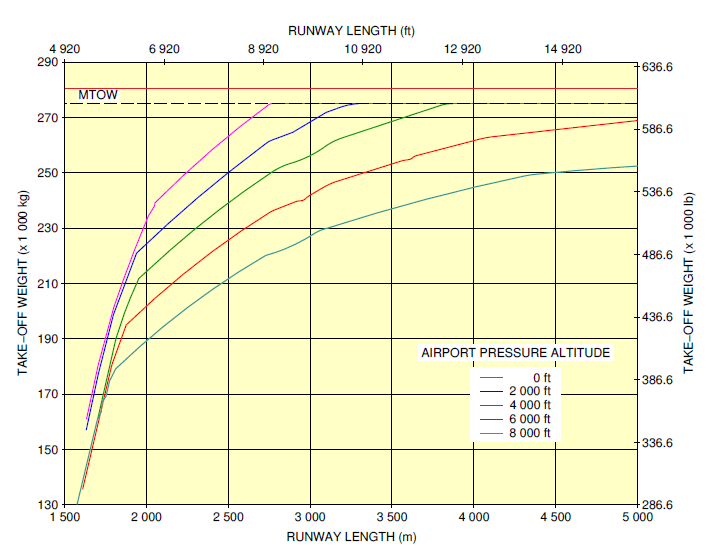 I have marked the -900ULR MTOW with a red line at 280t take-off weight. It is easy to imagine how the curves extend from the given max certified weight of 275t to 280t. We can see that we stay inside the usual 10-12kft runways at airports which have an altitude up to 2,000ft. Singapore’s Changi airport has 13kft runways and are at sea level, as are LAX (11kft and 12kft runways) and Newark (10kft and 11kft runways). So runway performance should be ok at 280t for the A350-900ULR for these airports (and many others).

It is important to point out that the lengths in Figure 3 are not the normal take-off distances the aircraft has; they are shorter. The figure shows the worst possible runway length the aircraft will need when an engine goes bang just before or after the V1 speed (the speed of continuing the take-off, see Robert Bucholz comment). In case of the engine failing before V1 one stays down and applies full brakes. This is where the maximum braking capacity comes in and this might have to be tweaked in the case of the A350-900ULR. If one loses an engine after V1, the take-off continues on one engine. The runway length is then the distance needed to an obstacle which is max. 50ft high in the direction of the runway.

Contrary to take-off the Max Landing Weight (MLW) of the aircraft can still stay the same for a variant that has other weights increased. Even if MLW was increased for reasons of landing with more of fuel on-board, landing performance is seldom critical for a modern airliner.

A final consideration would be the max service ceiling that the aircraft would have with one engine inoperative (OEI). I don’t have the OEI ceiling for A350-900 but these are normally FL 130-200. Once again, the low wingloading increase of the A350-900ULR and a small decrease in max continous powerloading (max continous OEI engine thrust compared to MTOW) of 0.121 (-900) reducing to 0.116 (-900ULR) should guarantee a high enough OEI service ceiling for most routes.

← Do the Boeing 787 sums add up, Part 2
What’s the trouble with Bombardier and the CSeries? →