Bjorn’s Corner: The role of a Flight Management System

15 April 2016, ©. Leeham Co: In several of my Corners when describing flight control systems and autopilots for airliners, I have written about the aircraft’s Flight Management System (FMS) without actually describing its role completely.

The first complete FMS was introduced with the Boeing 767 in 1982. Before the Boeing 767, aircraft cockpits had at least three flight crew members, the third being the navigator or flight engineer. This third person managed a number of tasks. He surveyed the aircraft’s systems/engines and performed the navigation for the aircraft.

With the introduction of computerized support systems for system monitoring and warning (EICAS for Boeing, ECAM for Airbus) and navigation (FMS for both Boeing and Airbus), the third person could be replaced and two flight crew cockpits became the norm.

When flying a modern airliner, the FMS has a central role in both flight preparations and during flight. We will therefore describe what an FMS does in more detail.

I will now describe how a pilot would use an FMS in flight preparation and during flight. I have chosen to show an A320 unit mainly because that is the one I got familiar with during my preparation to fly the A350, and there is a nice training application available in the internet. I could equally well have described the FMC (C for computer) used in the Boeing 737; its operation is very similar.

I will describe the overall operation of an airliner FMS but not go into all details. Anyone wanting to do that can go to this free FMS training site, which guides you in a nice way through what’s involved. There are many others that one can find, showing, e.g., how the 737 FMS works and there are apps to buy for one’s iPad or Smartphone should one be interested.

What an FMS does

The primary role of an FMS is to handle the aircraft’s navigation. It does that by using an up-to-date internal standardized navigation database which contains the world’s airways, navigation points, airports, radio navaids etc. This is then used together with the mission’s flight plan to generate a secure flight path for the aircraft both in the lateral plane (LNAV) and vertical plane (VNAV).

There is quite a bit of information that needs to be entered in the FMS to achieve such a safe flight. We will now describe what is needed in a non-detailed way.

After turning on the FMS, one hits the DATA key in Figure 1, followed by A/C Status on one of the screens dynamic keys. The figure shows the typical page that appears on an FMS for the A320 and to the left, the nice step-by-step tutorial that is available on the site I mentioned. 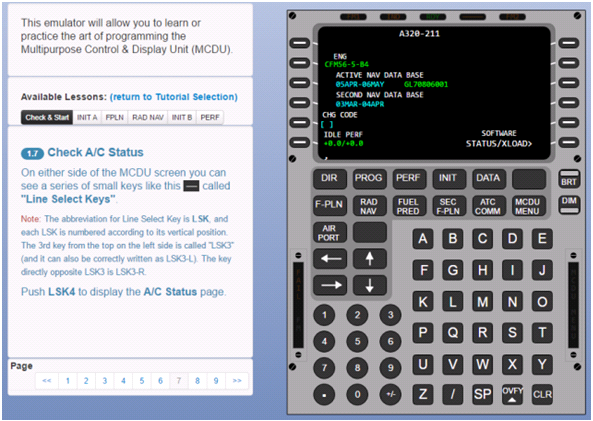 Here we can check the aircraft type (A320-211), its engines (CFM56) and that the Nav database is for April-May, i.e., up-to-date. Then one checks that things like present position and time are correct.

With the INIT page (Figure 2), one starts to enter the flight plan, most often as a company standard route (CO RTE in Figure 2), then FLighT NumBeR, Cost Index (how economical to fly), CRuiZe Flight Level, From/To airports, etc. 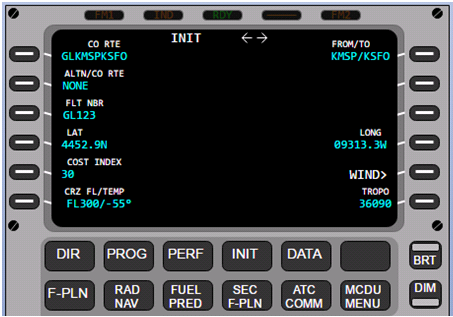 Then one starts to dissect the entered Flight Plan from the company route at the F-PLN page. Here one chose the actual Runway, Standard Departure Route etc., Figure 3. 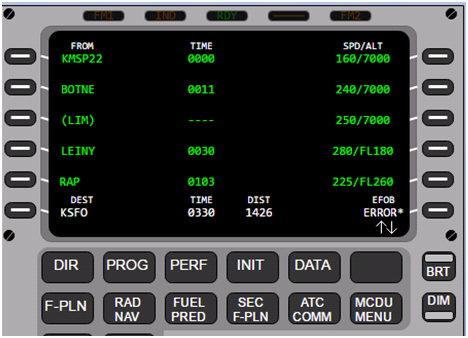 Once the flight plan has been completed with RWY, the SID (Standard Instrument Departure procedure) and all the waypoints to be used, one hits the RAD NAV key, to enter the Nav Aids that shall be used, Figure 4. Most of the time these are already set by the FMS. 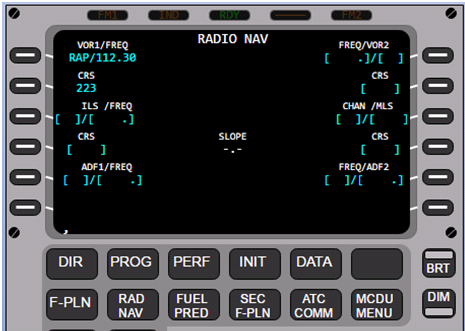 Then the INIT second page is complemented with fuel information and weights, Figure 5. Normally these have to be calculated outside the FMS, previously manually but today with an Electronic Flight Bag (EFB) application. 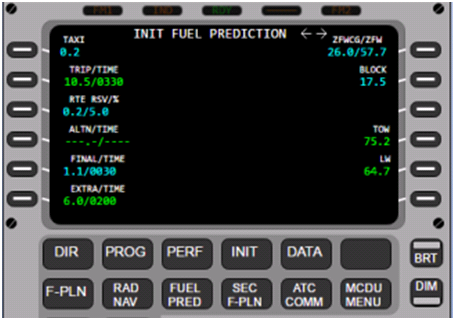 Then the FMS pre-flight preparations finish with the PERFomance page, Figure 6. Here the Rotation, Lift-Off and Safety speeds (V1, VR, V2) are set, the transition altitude and thrust reduction/aircraft acceleration altitudes are set. Then flap and trim settings, any thrust de-rate as fake FLEX Take-Off TEMP (to fool the engine to reduce thrust) and minimum engine out acceleration altitude. 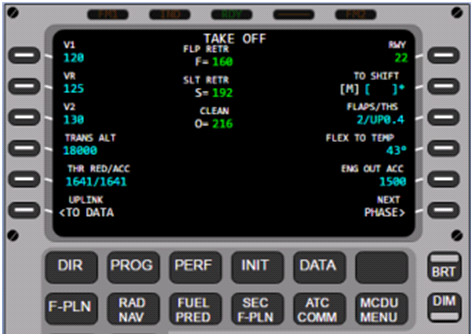 As can be seen, there is quite a bit of data that the FMS needs for it to control the flight together with the aircraft’s autopilot. When one gets used to entering the data, it is quickly done, however.

There is more to it than this overview. This is just to give a flavour for what kind of data that controls an FMS navigated route.

During the flight, the FMS continuously monitors the aircraft’s fuel consumption and presents its predictions of fuel left under the FUEL PRED page. The FMS also calculates when it would be optimal to increase Flight Level to always fly at best altitude when the aircraft gradually gets lighter as fuel is burned off.

The above description is brief but is done to give a feel for how central the FMS is in a modern airliner. It is the part of the aircraft which requires the most time during pre-flight preparations in the cockpit. This is valid for airlines which have not automated the calculation of the data and the feeding of it to the FMS.

Many airlines have now a dispatch function which calculates all the data and then transfers it to the aircraft via datalink like the ACARS function. It is still the flight crew’s responsibility to go through all the pages and make sure that the entered information is correct. The aircraft’s captain is ultimately the single person responsible for the safe transport of the aircraft’s passengers.

Next week we will look closer at the use of the FMS during the flight phase.

13 Comments on “Bjorn’s Corner: The role of a Flight Management System”