A new title for Rao wasn’t revealed in the Bloomberg story. He currently is EVP-Strategy and Marketing, so he already was right up there behind Leahy.

But the report, which is presumed true (Bloomberg has a good track record on this sort of thing) is pretty clear indication that the 66-year old Leahy is soon to retire and Rao is almost certainly his successor. I’ve known Leahy almost his entire time at Airbus. He joined what was then called Airbus North America in January 1985. Airbus has virtually no presence in this region then (Mexico, the US and Canada). Airbus had a small global market share. Boeing was dominate and McDonnell Douglas was the No. 2 producer of commercial aircraft in the world. Lockheed had just exited the commercial airliner business, for the second time, with delivery of the 250th L-1011 in 1984.

Leahy has a brilliant mind and a mercurial personality. He’s one of those love-him-or-hate-him kind of guys. Boeing officials simultaneously are infuriated by him but many also have grudging admiration for him. He’s brusque. He has a quick, biting wit. And from a reporter’s perspective, he is imminently quotable.

His take-no-prisoners approach and acerbic personality is tough for some to take. But nobody can deny his success.

When Leahy was named chief commercial officer in 1994, moving to the Toulouse headquarters in the process, Airbus only had a 18% market share. McDonnell Douglas was in the final slide. A merger with Boeing was announced in 1997.

Last year, Airbus’ market share increased to about 60% of the backlog for single aisle airplanes and it reached parity with Boeing for wide-body sales. Much of this was due to Leahy, not just for sales but also for product development.

Leahy, with his US perspective, continually push Airbus designers to think beyond their European roots and come up with long-range aircraft to compete with Boeing’s dominance in this sector.

There were miscues, to be sure.

Leahy originally dismissed the 787 as another Boeing paper airplane pipe dream. When sales took off, the original response was a re-winged A330 using 787 engines that was named the A350.

It was a market dud. Furthermore, it took four or five more tries to come up with the A350 XWB. Even then, the smallest model, the A350-800, proved unpopular and has been all-but dropped.

The A350-1000 needed tweaking that eliminated some engine commonality and how Airbus handled the revisions openly irked Tim Clark, the president of Emirates Airline and a launch customer of the A350-900 and -1000. Clark later canceled his order for the A350, saying it was no longer the plane her ordered.

The most controversial product development during Leahy’s long tenure is that of the A380. Even in the late 1990s when the airplane was conceived, some in the industry viewed the aircraft as folly because market dynamics were already changing.

Some believed Airbus simply had “747-envy,” and wanted a competing product.

It wasn’t that simple.

Long after the fact, I was told by an Airbus officer that one driving force in launching the A380 was that Boeing was selling the 747 to airlines a later downsizing the order to the 777, which competed with the A340. Without the ability to do the same, Airbus was losing sales.

You can take this at face value or not, but that’s one of the reasons given for the program.

As Leahy aged, and after he had several serious health issues that hit the press, speculation occasionally arose when he will retire. I always thought John would stay until he was carried out feet first. He just loved the hunt, the victory and skunking Boeing too much to call it quits before then.

But as one gets closer to the end than to the beginning,* priorities do shift. And I think they’ve shifted for John. Word on the street is Leahy will likely retire by the end of next year.

*With credit for this phrasing to Alec Guinness in Bridge on the River Kwai.

His presumed successor, Kiran Rao, is a Leahy protégé, having served with Leahy at Airbus North America. In recent years, his public profile has been elevated. He is a speaker every year at the Airbus Innovation Days, the international media briefing in advance of the Farnborough and Paris air shows.

Rao’s wit is every bit as quick as Leahy’s, but his style is far more subdued. He’s had key roles in conceiving the A320neo and A330neo. The former was publicly derided by Boeing officials. They got their comeuppance when the A320neo became the fastest selling commercial airliner ever and rocked Boeing back on its heels when it easily overtook the 737 in sales.

Unusually low fuel prices stalled sales of the A330neo. Fuel inevitably will go back up and early A330s are nearing retirement age. With selling prices as much as $40m less than the somewhat more efficient 787, the A330neo’s day may be yet to come.

Boeing 757 Scimitar: Aviation Partners Boeing and United Airlines are installing the first Scimitar for the Boeing 757. We had details about this way back in April 2015. The Boeing 767 is next.

Skip this movie: A new movie, the USS Indianapolis: Men of Courage, isn’t even worth the $9.99 Comcast charges On Demand, let along what you’d pay in a movie 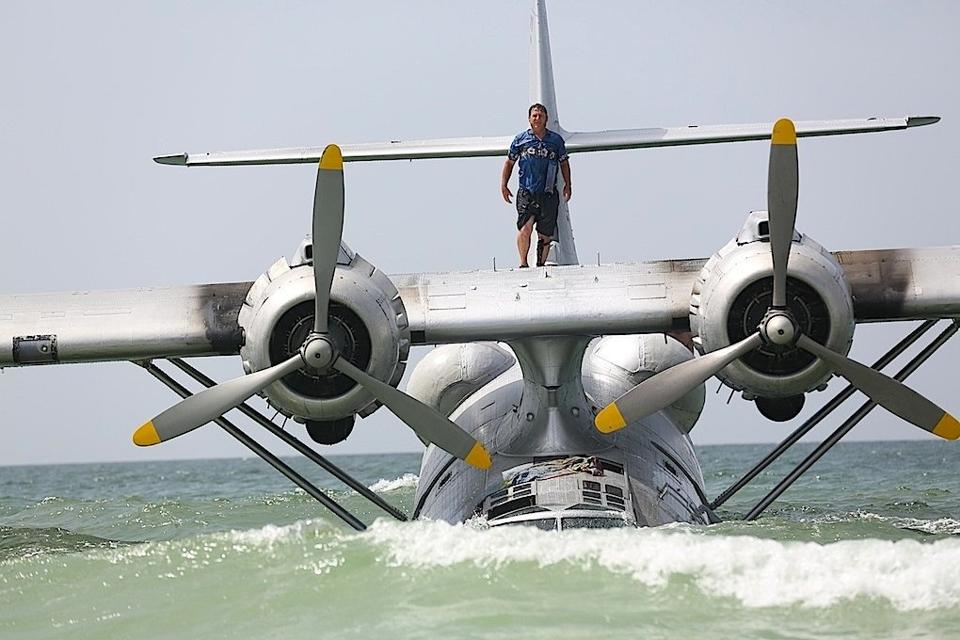 This PBY Catalina was to be used for the movie USS Indianapolis: Men of Courage. It was one of the only airworthy PBYs. It was destroyed, Photo via Google images.

theatre. Based on the true, tragic story of the sinking of the ship in World War II and attacks by sharks, the movie is replete with technical errors (not the least of which is the Indianapolis sailing at night in enemy waters with its running lights on and using the WW II submarine diving klaxon instead of the “bong, bong, bong” for general quarters). Nicolas Cage, the only “name” star, is so wooden the term “actor” doesn’t apply.

The movie’s CGIs are poor. The greatest claim to fame is one of the last airworthy PBY Catalinas was destroyed during the making of the movie.

Reaction to Trump’s election: In my column at Forbes, I write about the reaction to the election of Donald Trump to the presidency and what he might do about the US ExIm Bank. Readers of LNC know that I don’t think much of Trump. But he’s going to be my president. I hope for success for all Americans and our international allies.