galvanizes the organization, and is often met with skepticism from outside observers. Boeing recently created a BHAG that could transform aerospace MRO. Its goal is to triple its service revenue to $50bn within the next decade, and it is taking decisive action achieve its vision.

Last November, Boeing announced the creation of a Boeing Global Services (BGS) business unit which will combine civil, military and space services under the leadership of Stan Deal. This will elevate services to a distinct business alongside Commercial Airplanes and Defense, Space & Security (DS&S).  Plano (TX) will be the headquarters of the 20,000 employee BGS business unit, which will become operational in July.

Most successful OEMs in the aftermarket tend have a dedicated services business unit with clear goals and accountability. Rockwell Collins, for example, created the Collins Services business in the mid-1990s, which set the stage for significant growth and innovation. For several decades, engine OEMs have also demonstrated the benefits of service organizations.  Boeing’s reorganization potentially eliminates a significant impediment to growth.

It is also investing in infrastructure. Boeing recently announced plans to build a new GoldCare facility at London Gatwick Airport. This is on the heels of a UK maintenance hangar that opened earlier this year. In Asia, Boeing created an MRO joint venture with SIA Engineering Company. It is also expanding its Southern California Engineering Design Center which handles all its customer support activities except the 787. These responsibilities were transferred from Seattle in 2013/2014.

Are these actions enough for it to reach its $50bn “BHAG” in a decade?

To analyze this issue, we must first unpack the composition of Boeing’s service businesses.

Global Service & Support has $9.4bn in defense-oriented business including integrated logistics, maintenance, modifications, upgrades, training and government services. It has many large and lucrative military sustainment programs such as a $2bn C-17 sustainment program with the US Air Force and a performance-based logistics program to support the UK’s entire fleet of Chinook helicopters. It also has a healthy roster of customers for legacy military sustainment for Boeing and non-Boeing platforms. 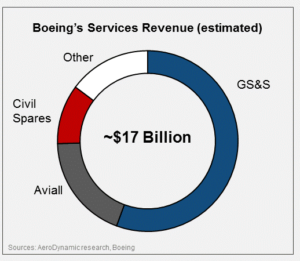 For some reason, Boeing does not publicly disclose the size of its commercial services business. My estimate it that it is a $7bn–$8bn business. Parts distributor Aviall, which it acquired in 2005, is the largest element with more than $3bn in revenue. Boeing’s proprietary spares business is another $1.5bn– $2bn. The rest includes training, modifications, information services (including Jeppesen) and maintenance programs.

Its GoldCare integrated maintenance offering, where it manages the aircraft’s component maintenance and associated spares, is slowly gaining traction. In 2015, it signed a record $3bn, 20-year deal with budget carrier Norwegian for its 787 and 737 MAX aircraft. The GoldCare brand also includes integrated maintenance programs for 777 and 747, covering service to manage aircraft consumables and expendables (Integrated Materials Management) and access to rotable pools. More than 60 airlines are GoldCare customers.

To reach $50bn within a decade, Boeing needs to average 11% compound annual growth. Its largest opportunities by far are the air transport and military maintenance, repair and overhaul (MRO) markets. The air transport MRO market is worth approximately $70bn in 2016.

The largest segment is engine maintenance, which is the domain of the Big Four engine OEMs (GE, Rolls, Pratt & Safran) and major independent MRO suppliers like Lufthansa Technik and MTU. Component maintenance is just over a quarter of spending and Boeing is increasing its exposure here as it vertically integrates on nacelles, flight control systems and interiors. Still Boeing’s content where it owns the IP (and associated aftermarket rights) is between 5%–10% of the market. Line maintenance (22%) is labor intensive and airlines consider it to be a core activity.

Airframe heavy maintenance is closer to home for Boeing, but it is labor-intensive and dominated by agile, independent MROs. Boeing has avoided completing here thus far. The final segment is modifications – interiors, cargo conversions, paint and avionics upgrades. Boeing can add considerable value here given the importance of engineering capability and IP. Overall, Boeing has potential competitive advantage in just two of five air transport MRO segments – modifications and component maintenance which comprise just 36% of the air transport MRO market.

What about GoldCare?  Boeing has hundreds of aircraft under contract, many of these in partnership with Air France/KLM. These programs can be lucrative but won’t scratch the surface in achieving Boeing’s BHAG. Signing up 500 787s under GoldCare by 2026, for example, would bring in less than $1B per year.

What about the 737 MAX and the thousands of orders?

This is an ultra-competitive market with numerous MROs offering integrated maintenance programs. The MAX also has aircraft significant component commonality with the 737NG, which limits Boeing’s ability to create competitive differentiation. Boeing will find it extremely difficult to win 737 GoldCare programs if it wants to turn a profit.

What about military maintenance?

Boeing has done well in this market with $9.4bn in GS&S revenue. Some $60bn is spent annually on military aircraft maintenance with another $20bn or so in other forms of sustainment – training, logistics and the like.

However, half of the $60bn spent on military aircraft sustainment is for field maintenance — an activity traditionally performed by active duty military personnel rather than OEMs. Engine maintenance is another 15% of spend and mostly performed by OEMs and government depots. Boeing’s best opportunities are in components and airframe maintenance – segments that comprise 35% of military maintenance spending and $20bn in global MRO spending.

How much growth can Boeing realistically expect in its services business over the next decade?

The defense maintenance market is expected to be relatively flat, with aircraft from the aging military aircraft fleet where the average age is 25-30 years retiring in ever greater numbers and UAVs taking over more missions.

The Trump Administration’s budget priorities and higher spending by NATO allies could bump up growth to low single digits. Factoring in modest price inflation, I believe that a growth rate of 2%-4% per year through 2026 is reasonable for Boeing’s defense services business.

Aviall participates in military, air transport and business & general aviation markets and is well-positioned with a global footprint, scale, and advanced IT.

More recently, Boeing has begun to push its suppliers to distribute through Aviall as part of its Partnering For Success supply chain initiative.  Blended growth in Aviall’s addressed markets should be approximately 3%.

Factoring in market share gains and price inflation I could see Aviall averaging a healthy 6-8% compound annual growth over the next decade if it executes and keeps customers happy.

Finally, there is Boeing’s air transport revenue stream, currently served by Commercial Aviation Services (CAS). Here, the blended market growth rate should be about 3%. Factoring in market share growth, traction from GoldCare, and pricing (a big Boeing priority these days), one could anticipate a healthy 5-7% annual growth over this timeframe. 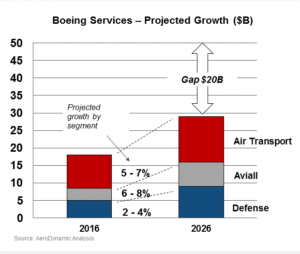 Adding up the three segments, my cursory analysis shows a path for Boeing to reach $30bn in services revenue by 2026 — if all goes well. This is a sizable increase but still leaves a $20bn gap to reach the $50bn BHAG.

How to close the gap? Clearly acquisitions must be on the table.

The challenge is that there are so few companies that 1) would significantly move the needle in services revenue, 2) provide adequate return to Boeing shareholders and 3) are a cultural fit with the Boeing Services Group.

Another option is for Boeing to engage in more “wrench turning” activity in its addressed markets. As an aircraft OEM, Boeing also confronts the twin challenges of cost structure and culture as it competes with aggressive and experienced MRO suppliers like Lufthansa Technik and AAR. This is one reason why it has avoided this type of activity thus far. The new BSG organization may provide an opportunity to lower its overhead rate and become competitive in hands-on activity.

A third option is for Boeing to change the definition of its addressed markets and move into non-core activities like engine maintenance or aircraft leasing.

These segments, however, are fraught with danger. Engine maintenance is heavily shaped by on OEM IP and it is difficult for independent suppliers to compete let alone earn more than single-digit margins. And Boeing would face backlash from the Big Four aeroengine companies.

Aircraft leasing is large but becoming much more competitive as new money floods into the market. It isn’t clear that Boeing could succeed in this environment.

What about “digital” as a services growth driver? Digital holds the promise to reduce operating costs, improve reliability and enhance the passenger experience.

Despite being one of aviation media’s favorite topics, digital’s potential is more in cost reduction than revenue enhancement.

Ironically, Boeing’s biggest financial opportunity in the new BSG organization is not tied to revenue growth, but rather cost reduction in its parts distribution network.

This is a scale-intensive activity where bigger is generally better. Boeing’s dilemma is that it has three major distributors – DS&S, Commercial Aircraft, and Aviall — in the same company. Is it time to combine their operations?  Airbus recently did this when it turned over its parts distribution operations to Satair, an independent distributor that it acquired in 2011.

Creating a single mega-distributor is probably Boeing’s best cost savings opportunity in the new services organization, and Aviall is the logical leader of the new organization. Aviall has a broad and deep distribution network that serves military, business aviation and air transport customers.

Why not consolidate Boeing’s parts warehouses to a single location in DFW, which is also a global logistics hub? Granted, the implementation risk of this move would be high. But if successfully executed it would create a distributor of unparalleled scale and scope, sending a message that Boeing is serious about services.

Overall, I conclude that the probability of Boeing achieving its $50bn BHAG is remote. However, this may be missing the point. Sometimes the real purpose of a stretch goal is to change a company’s culture rather than to achieve a result. Boeing is making the right moves in creating a dedicated service organization and bringing in outside leaders like Kevin McAllister. It is positioned to reshape aerospace MRO in the decades ahead.

← A330 easier to re-lease than 777
Boeing earnings preview: doubts about Global Services target →