July 6, 2015, © Leeham Co. The US ExIm Bank authorization expired last week. As readers know, I’m a strong advocate of renewal of the authorization. Boeing, and other companies, hope reauthorization can be achieved this month.

I won’t restate the reasons I think ExIm should be reauthorized, nor my utter disdain for the right-wing Republicans and Tea Party types who don’t get that the Bank helps Boeing sell airplanes and sustain or create jobs. I’ve written about this many times, and the competitive disadvantage Boeing will have vs Airbus, whose European Credit Agencies will take full advantage of this.

But there are some points on the “other side” to revisit.

END_OF_DOCUMENT_TOKEN_TO_BE_REPLACED

At least for now. 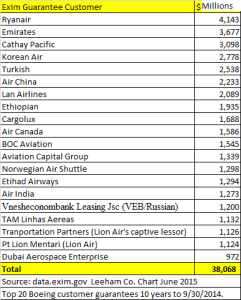 Boeing, and hundreds of smaller companies, hope for a Lazarus miracle. Though nobody expects a revival of the Bank in four days, as in the Bible, they think resurrection is possible this month.

“There is a strong majority in the House and the Senate to reauthorize ExIm,” Tim Neale, Boeing’s Washington (DC) spokesman, told us Monday. “The problem is getting a Bill to the floor.” The Bill has been bottled up in committees, where Republicans/Tea Party members are chairmen and opposed to renewing the Bank.

END_OF_DOCUMENT_TOKEN_TO_BE_REPLACED

June 17, 2015, Paris Air Show, c. Leeham Co. With focus, as always, on Airbus and Boeing, and an airplane that neither exists nor is about to any time in the near-term (the Middle of the Market aircraft), little attention was paid to Embraer, currently the third of the Big Four commercial aircraft companies.

Embraer finished the Air Show (which essentially ends June 18 for the industrial sector), with 50 orders for the E1 and E2 E-Jets.

John Slattery, the chief commercial officer, said the company is ending the first half of the year with 125

firm orders for the two platforms. EMB now has 70 customers, headed for its target of 100 by 2017, and an important new customer joined the ranks, albeit through a used airplane transaction. Delta Air Lines will purchase 20 E-190s once a new pilot contract is ratified. The airplanes will be flown by Delta pilots for the mainline carrier, not one of its regional partners.

END_OF_DOCUMENT_TOKEN_TO_BE_REPLACED

The US3 charge that the ME3 have received around $42bn in subsidies and claim continued government support put them at a disadvantage. Loads of information has been reported, with claims and counter-claims going back and forth. But the IATA conference attendees, including members of the media, were looking for sparks to fly between Doug Parker, CEO of American Airlines, who was on a couple of panels and who was voted president of IATA for the next year, Tim Clark, president of Emirates and Akbar Al-Baker, CEO of Qatar.

END_OF_DOCUMENT_TOKEN_TO_BE_REPLACED

June 7, 2015: The chief executive officer of Lutfhansa Airlines said he welcomes the Big Three US airliners to the dispute over whether the Big Three Middle Eastern carriers are unfairly competing against legacy airlines.

Carsten Spohr, CEO of Lufthansa Group, told a press conference on the opening day of the IATA Annual General Meeting that LH has long been complaining about Emirates Airline, Qatar Airways and Etihad Airways and their aggressive expansion, first in Europe and now the US.

American Airlines, Delta Air Lines and United Airlines are challenging open skies and subsidies to the ME3.

END_OF_DOCUMENT_TOKEN_TO_BE_REPLACED

April 23, 2015: United Airlines announced its 1Q2015 earnings today (which will eventually be posted with commentary on SkyWriterAviation.aero). What caught our eye in the press release was the following. United will:

END_OF_DOCUMENT_TOKEN_TO_BE_REPLACED

Alaska Air vs Sea-Tac Airport: As if Alaska Airlines doesn’t have enough to do fending off Delta Air Lines, the Port of Seattle, owner of the Sea-Tac International Airport, wants to build a new International Arrival Facility (IAF) for more than $600m.

There certainly is a need. The current IAF is in the South Satellite Terminal. It’s old and it’s small. With Delta making Seattle its West Coast hub, and additional service added by a number of airlines (including, from Delta’s view, that dastardly Emirates Airline), it’s clear a new IAF is needed.

But therein lies the rub. The IAF, by definition, will be used by international flights–not by domestic flights. Yet under the Port’s financing proposal, all carriers at Sea-Tac will have to pay for the thing. Alaska, which operates more than 50% of the flights at Sea-Tac, has no international routes from Seattle save Canada. Alaska officials are understandably unhappy with the proposed funding source. Not only would Alaska be paying for a facility it won’t use, it would be subsidizing Delta’s operations.

END_OF_DOCUMENT_TOKEN_TO_BE_REPLACED

Pontifications: USA to the World: “We want to fly everywhere. Period.”

I haven’t weighed in on the current battle between the Big 3 US airlines and the Big 3 Middle Eastern carriers because it’s largely beyond the scope of LNC. But I like commercial aviation history, so I thought I’d bring up a little.

In the era immediately post-World War II, when third, fourth and fifth freedom rights were being negotiated between the US and the Rest of the World, there was a member of Congress, Claire Luce Booth of Connecticut, summed it up nicely: “American postwar aviation policy is simple. We want to fly everywhere. Period.”