Boeing 757 MAX: why its operating economics does not work

Feb 12, 2015: In a series of articles during the autumn we covered the replacement scenarios for Boeing’s 757-200 when used for long haul passenger operations. The series also included an interview with Boeing’s head of new airplane studies, Kourosh Hadi, director of product development at Boeing where he outlined what Boeing studied and why.

This week The Wall Street Journal published an article portraying that Boeing seriously considered launching a re-engined 757 as a response to Airbus A321LR. Boeing has since vehemently denied the story and we have given the reasons why it does not make sense for Boeing.

As a complement we show the operational economical analysis that we did at the time of our 757 articles, now updated to the exact modifications suggested by The WSJ, a new engine and new winglets paired with modern avionics.

END_OF_DOCUMENT_TOKEN_TO_BE_REPLACED

Dec. 30, 2014: This was a highly active news year. Airbus launched the A330neo and A321neoLR. Boeing firmed up more than 200 orders for the 777X. Emirates canceled 70 A350 orders, a record cancellation when no customer collapse was involved. Boeing and its principal union, the IAM 751, faced off in a bitter contract vote. And on the truly dark side, Malaysian Airlines lost MH370 and MH17.

The Top 10 stories read on Leeham News included all of the above but MH17. Others made the Top 10 list. Here it is:

END_OF_DOCUMENT_TOKEN_TO_BE_REPLACED

Boeing’s Investor Relations department in Chicago sent a message to aerospace analysts to tamp down concerns about falling oil prices and questions over the impact on airplane orders.

END_OF_DOCUMENT_TOKEN_TO_BE_REPLACED

At what price do used A380s make sense?

Dec. 3, 2014: It’s been seven years since the first Airbus A380 entered service with Emirates Airlines. Tim Clark, the carrier’s president and chief operating officer, told Leeham News and Comment in September that when the A380s reach age 12-15, the period assumed for a useful life in the Emirates business plan, he’ll just send the airplanes to the desert and cut them up.

Aside from cargo conversions, for which the A380 is a poor candidate, is there an alternative for the secondary passenger market?

END_OF_DOCUMENT_TOKEN_TO_BE_REPLACED

Posted on December 3, 2014 by Scott Hamilton

Nov. 25, 2014: E-175s for Alaska Airlines: SkyWest Airlines of the USA, a provider of contract service to several US carriers, ordered seven Embraer E-175s for planned service for Alaska Airlines. Simultaneously, Alaska announced new service from its Seattle hub, using E-175s from SkyWest to Milwaukee, Oklahoma City, and from Portland to St. Louis.

This is Alaska’s first use of the E-Jet in its system. All service to now has been with Bombardier Q400s from ALK’s sister, Horizon Air, or Bombardier CRJs from SkyWest.

Alaska is in a market battle with Delta Air Lines, which is expanding its hub at Seattle.

AirAsia X and Norwegian Air: CAPA, the Centre for Asia-Pacific Aviation, has a very good analysis about AirAsia X, the long-haul, low-fare carrier that has reported big losses for the last several quarters. This airline made it on our Storm Warning Flag list last spring. It’s got a big backlog of Airbus A330-300s, A330-900s and A350-900s and it’s announced some deferrals of the -300s. We consider this to be a shaky skyline for Airbus, particularly with the -300s.

Aviation Week has a good story about Norwegian Air Shuttle, another airline on our Storm Warning Flag list. NAS is building a long-haul business model based on the Boeing 787 in additional to plans to greatly expand its Boeing 737-based LCC model in Europe.

Production rates: We’ve written a great deal about production rates and production gaps. Flight Global’s sister company, Ascend, provides this broad look (free registration required in a particularly annoying process). The analysis missed the Airbus notice to the industry to plan to take production rates of the A320 to 54/mo in 2018, but otherwise this is a good analysis which happens to pretty well coincide with our views we’ve expressed throughout the year. This is a good one-stop piece.

Little progress on A330 production gap

With the end of the year a mere five weeks away, Airbus appears to have made little progress in closing its production gap for the A330.

END_OF_DOCUMENT_TOKEN_TO_BE_REPLACED

No response to A321neoLR: Reuters reports that Boeing isn’t going to respond to the Airbus A321neoLR, the airplane intended to be a bonafide replacement for the Boeing 757.

“We are very happy with where the MAX 9 sits and feel the competition is simply doing things to catch up with it,” Randy Tinseth, vice president of marketing at Boeing Commercial Airplanes said, Reuters reports.

There’s really no other choice but to say Boeing is happy. As we demonstrated in our three-part 757 replacement series in October, the 737-9 can’t be made competitive with the A321neoLR. As Tinseth notes in the Reuters article, and which we covered in our three-part series, Boeing could put another fuel tank (as does Airbus in the A321neo) in the -9 to match the range. But what Tinseth did not note in Reuters (or at least it wasn’t reported if he did), and which we did write, the 737-9 comes up more than 15 passengers short of the A321neoLR and 20 passengers short of the 757–and it needs 12,000 ft of runway to take off with a full load.

END_OF_DOCUMENT_TOKEN_TO_BE_REPLACED

JetBlue defers A320s: This US airline announced at its investors’ day that it is deferring Airbus A320s from this decade into next. JP Morgan had this commentary November 19:

JetBlue…announced a deferral of 18 A320-family aircraft from 2016-18 to 2022-23. While having a $900m positive impact on cap-ex through 2018, we believe the deferral should also limit near-term speculation on widebodies and Transatlantic expansion for several years. The reason? We believe the deferral was driven in large part by Airbus’ continued study of an ‘A321neoLR….’ Airbus continues to explore the development of a long-range version (3,900 nm) of its flagship narrowbody aircraft to serve as a fuel-efficient competitor to the Boeing 757-200W, with potential entry in to service by 2018-19. We believe such an aircraft would fit exceptionally well into JBLU’s longer-term expansion plans, though it does imply a Transatlantic future somewhere down the road, in our view.

JetBlue has expressed interest in entering long-haul, over-water routes, but it doesn’t have ETOPS qualification. If it were to do so sooner than later, it would have to either wetlease aircraft (as did WestJet of Canada) or lease the four-engine A340-300, a cheap lift with a modest capacity.

END_OF_DOCUMENT_TOKEN_TO_BE_REPLACED 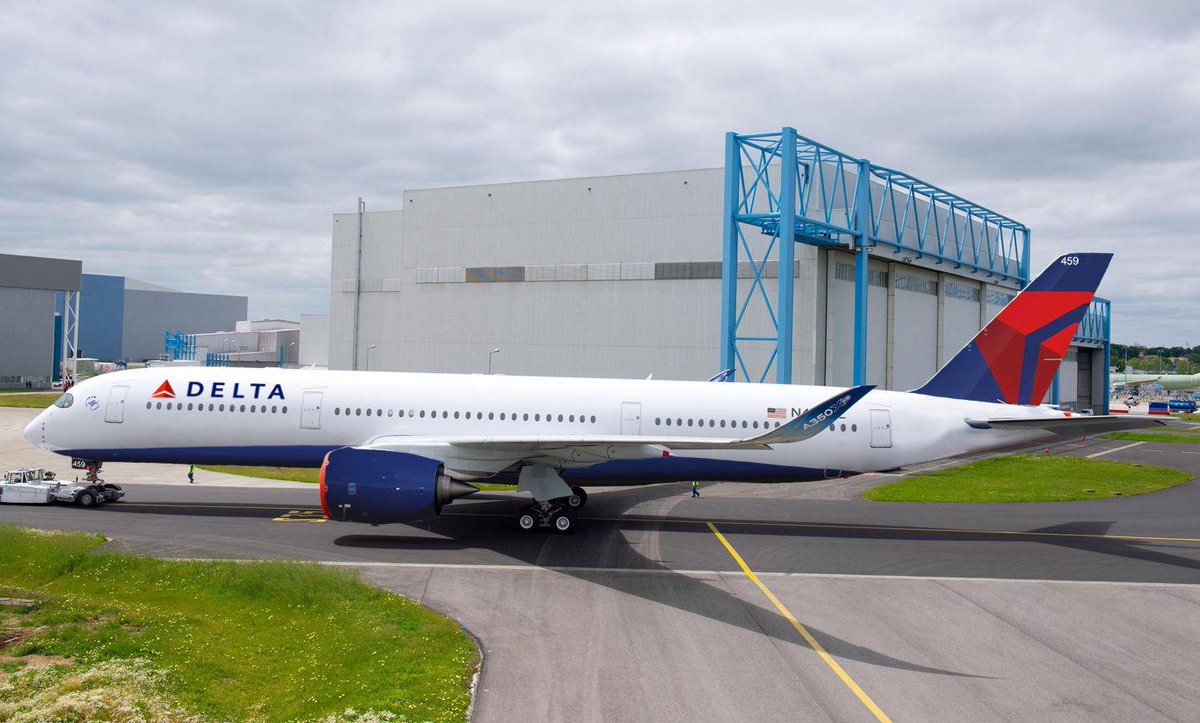 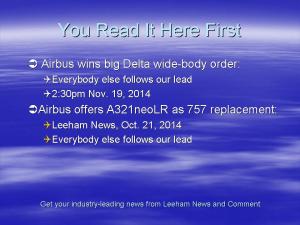 Boeing hoped to sell Delta the 787-9 and also offered five new 777-200LRs as bridge lift until delivery slots for the 789 were available, according to our information.

END_OF_DOCUMENT_TOKEN_TO_BE_REPLACED

Delta Air Lines wants to double the number of its gates at Seattle, potentially allowing more than 300 flights a day, Bloomberg News reports. The story appeared just weeks before Delta will make its decision whether to order 50 wide-body jets from Airbus or Boeing, with about half of them planned for trans-Pacific service from Seattle and Delta’s Detroit hub; and the other half for trans-Atlantic service from New York and Atlanta.

Best-and-final-offers from Airbus and Boeing were due last week or this week and an internal decision is due after Thanksgiving, we are told. Delta is expected to announce its decision at its annual investors day, which is December 11 this year.

Airbus has its annual investors days December 10-11 in London. We don’t ascribe any significance to the concurrent dates, since these are dates of long-standing in years past.