Are the widebodies orders seeing some earlier-than-expected recovery?

Airbus and Boeing said they don’t expect to see a renewed demand for wide-bodied aircraft until around 2022, +/-. But Boeing certainly had stronger-than-expected orders at last week’s Paris Air Show.

The company received orders and commitments for 50 787s and six 777s.

While the numbers appear nice, it’s always important to read the fine print.

Three of the 787s were from a 2015 announcement/commitment from El Al Airlines.

Airbus, on the other hand, announced a new order for just two A330-200s, a commitment for eight A330-900s. It also announced an order for 10 A350-900s that previously had been posted under Unidentified customers.

As we reported at the PAS last week, Boeing, propelled by the launch of the 737 MAX 10, handily won the orders race and headlines.

As noted above, it’s always necessary to read the fine print.

Below are the respective Airbus and Boeing charts from the Air Show. 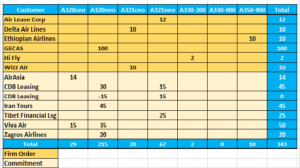 The Ethiopian Airlines A350-900 was a reveal of a previously Unidentified order. CDB Leasing converted 15 A320ceos to A321neos. Source: Airbus. 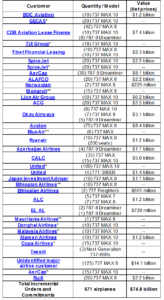 Click on image for a crisp view. Source: Boeing,

The US International Trade Commission last week issued the findings of its decision in favor of Boeing in its complaint Bombardier engaged in dumping the CSeries in its sale to Delta Air Lines.