Icing on the cake

There’s no doubt Airbus’ rise made life miserable for MDC’s commercial business. Lockheed, as the fourth teat in the business, suffered as well. But if anything, Airbus was only icing on the cake of the downfall of these two companies.

Lockheed and McDonnell Douglas failed largely due to their own business decisions and factors unrelated to the entry of Airbus into the market.

This is exactly what happened.

Each also had external factors that contributed to their demise.

Lockheed wanted to reenter commercial aviation, having exited following the development of the Electra propjet. The Electra was Lockheed’s choice to follow the successful Constellation series while avoiding competing in the emerging jet market in competition with Douglas, new entrant Boeing and Convair with the DC-8, 707 and CV-880 respectively.

The Electra was a superb aircraft, with good passenger comfort, over-powered and flexible in operation. It also had a fatal flaw that caused wings to separate from two aircraft in flight, killing all aboard. The aircraft were put under severe speed restrictions until modifications were made.

With propjets of the Electra’s size and design of limited demand with the pending designs of the small twin- and tri-jets, and the program loss due to the design defects, Lockheed exited commercial aviation once the program wound down. The last Electra was delivered in 1961.

A few years later, the company decided to reenter the airliner market with the airline requirement for a jumbo jet smaller than the Boeing 747, which could economically serve the domestic US market and short- to medium-range routes worldwide.

McDonnell Douglas announced plans for a nearly identical DC-10. The program was launched in 1968.

Simultaneously, Lockheed was awarded a defense contract for the C-5A, the giant military transport.

The C-5A was afflicted with massive cost overruns and delays. The L-1011 program had its own issues, tracing to the Rolls-Royce engines selected for the airliner. RR went into receivership in England and for a time, it was unclear if Britain would bail out RR and proceed with the engines. Lockheed was faced with an airplane and no powerplant.

The C-5A program and the RR issue brought Lockheed to the brink of bankruptcy. In a controversial move, the US government provided loan guarantees for Lockheed (one might call this government subsidies by another name). Lockheed was saved. England reorganized RR, which produced the L-1011’s engines. But Lockheed suffered a two-year program delay in the process. 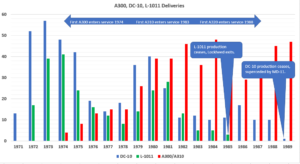 The L-1011 program problems meant Lockheed was unable to immediately produce a long-range version against the MDC DC-10-30/40. The L-1011-500 wouldn’t enter service until 1979, long after the competitor. This suppressed sales.

Lockheed needed to sell 500 aircraft to break even. Sales failed to meet targets. The company announced in 1981 it would cease production after the 250th L-1011. Production shut down in 1985.

Lockheed collapsed under the weight of the C-5A, the Rolls-Royce bankruptcy, splitting the market with McDonnell Douglas and for too long an orphan airplane. Airbus was just icing on the cake.

MDC’s decline in commercial aviation started with the DC-10 as early as 1974—though the first danger sign emerged in 1972, just a year after the aircraft entered service.

In June 1972, an American Airlines DC-10-10 cargo door blew off the airplane shortly after take-off from Detroit. The low altitude—11,750 ft—meant the pressure differential between the cabin and outside was not great. Still, the floor partially collapsed on to control cables. The pilots were able to land the plane safely.

The issue was traced to a poor design of the latch for the cargo door.

Despite this event and the warning it provided, the fix wasn’t performed on a timely basis on the fleet then in service. Two years later, a Turkish Airlines DC-10-10 taking off from Paris with a full load of 346 passengers and crew. The cargo door blew off, collapsing the floor. This time, the pilots couldn’t save the airplane. It crashed, killing all aboard. It was the worst air disaster up to that time.

Given that the cargo door was an issue revealed two years previously, the safety of the DC-10 came under scrutiny.

Five years later, another deadly accident led to the grounding of the airplane, once again over safety concerns.

In May 1979, an American DC-10 took off from Chicago. Before lift-off but after the plane was committed to take-off, the left engine separated from the aircraft. As designed, it flew up and over the wing. During this maneuver, the leading edge of the wing was hit and a hydraulic line was severed. The left wing leading edge slats, held in place by hydraulic pressure only, retracted. The left wing stalled.

The pilots, as it turned out, followed the one-engine out manual to the letter. Unable to see the wing and engine, all they knew was the engine power failed; they didn’t know the engine separated from the aircraft. The manual called for power reduction. With the left wing stalling, the reduction worsened the situation. The plane went perpendicular to the ground, nosed over and crashing into a trailer park. Everyone on board plus a few on the ground was killed.

Investigators examined the engine, which was on the runway at O’Hare, and discovered a severed flange, one of two that attached the engine to the wing, had failed due to fatigue. The FAA grounded all DC-10s for inspection and repair.

The investigation revealed that a procedure used by American and approved by McDonnell Douglas and the FAA to short-cut engine/pylon removal cracked the flange. It wasn’t a defect in the airplane but a defective maintenance procedure.

But the lack of a locking device for the wing slats was a design flaw. This and the grounding further blackened the eye of the DC-10 to such an extent that American removed the name of the airplane from its livery.

These incidents and the safety concerns hurt sales.

None of this had anything to do with Airbus.

MDC’s management also refused to invest in new airplane products. The MD-80 was a derivative of the DC-9. There was a big product gap between the MD-80 and DC-10. An upgrade of the MD-80 to the MD-90 wasn’t sufficient to attract customers.

When American signed an exclusive supplier agreement with Boeing in the mid-1990s, then-CEO Robert Crandall called the MD-90 “old technology” in explaining why he switched from McDonnell Douglas to Boeing.

MDC looked at developing a new aircraft with Fokker and South Korea. Neither happened. MDC conceived a twin-engine DC-10, but this went nowhere. MDC developed an MD-12 concept, an airplane that was similar to the later A380. No go.

By 1997, MDC was down to a 7% market share in commercial aviation, behind Boeing and Airbus. Faced with a need to invest $15bn to become a viable competitor again, then-president of MDC Harry Stonecipher said no. A merger with Boeing was agreed.

McDonnell Douglas’ demise in commercial aviation had more to do with the DC-10 experience and refusal to develop new airplanes than it was about Airbus.

The DC-10 experience occurred during the early years of Airbus, when only the A300 and A310 were produced. The A320 didn’t enter service until 1988, by which time MDC relied only on MD-80 derivatives.

Lack of commitment to commercial aviation, the DC-10, failure to invest in new airplanes and new technology is what killed MDC. Airbus benefited and may have helped it along, but MDC’s death was self-inflicted.

Boeing’s revisionist history overlooks its early days of relying on government money that benefited commercial airliners. The 307 Stratoliner, the industry’s first pressurized aircraft, used the wings, tail and engines from the B-17 bomber. The 377 Stratocruiser was a straight-forward conversion of the wartime C-97.

Even the 707, with the myth that Boeing bet the company on this airplane, came after a USAF commitment for the KC-135 tanker.

The 747 benefitted from R&D spent on the C-5A competition that Lockheed won.

And, while Boeing continues to deny it (see the last sentence of the second paragraph here, which is just not true), the World Trade Organization found Boeing received illegal subsidies from federal and state governments in the US (though far less than those received by Airbus).

Boeing is pursuing the complaint against Bombardier to avoid creating another Airbus.

In a twisted way, Bombardier really should take this as a compliment. Boeing in effect concedes that the CSeries is better than the 737 MAX.

Not bad for a company one sixth the size of Boeing in terms of revenues.