Why the A321XLR makes sense for Alaska Airlines

Feb. 23, 2020, © Leeham News: Alaska Airlines last week said it will place an order, perhaps this year, for 200 aircraft for delivery over the next decade.

The carrier exclusively operated Boeing 737s until its acquisition of Virgin America. Officials repeatedly put off a decision whether to return to an all-Boeing fleet.

Alaska has 30 A320neos on order from the Virgin merger. However, cancellation rights have small penalties.

The carrier ordered 37 737 MAX 9s. Three were built last year but are stored in the grounding. Seven more are due this year.

Alaska plans to aggressively grow in the next 10 years.

Here’s why converting the 30 Virgin orders to A321neos makes sense.

The A321neos, especially the A321XLR, provide Alaska with more flexibility and opportunities than relying exclusively on the MAX 9 and MAX 10 that will be under consideration.

LNA believes that Alaska should rely on the MAX 9 to replace the 61 A319ceos and A320ceos. With 37 MAXes already on order, adding to this fleet rather than adding the A320neo makes sense. The MAX 9 seats more people and works fine within the current Alaska system, except for some smaller airports in Hawaii and elsewhere.

The MAX 10, which essentially has equal capacity to the A321neo, has poorer field performance than the MAX 9, which is worse than the A321neo. The A321neo is better at difficult airports.

This is the flexibility.

The opportunities come from the dramatically better range. The A321XLR’s 4,700nm range is about one-third more than the MAX 9’s 3,550nm. It’s 42% better than the MAX 10’s 3,300nm. These are advertised ranges. All ranges are shorter when winds, holding time and alternates are computed.

This opens all kinds of opportunities for Alaska to aggressively grow. 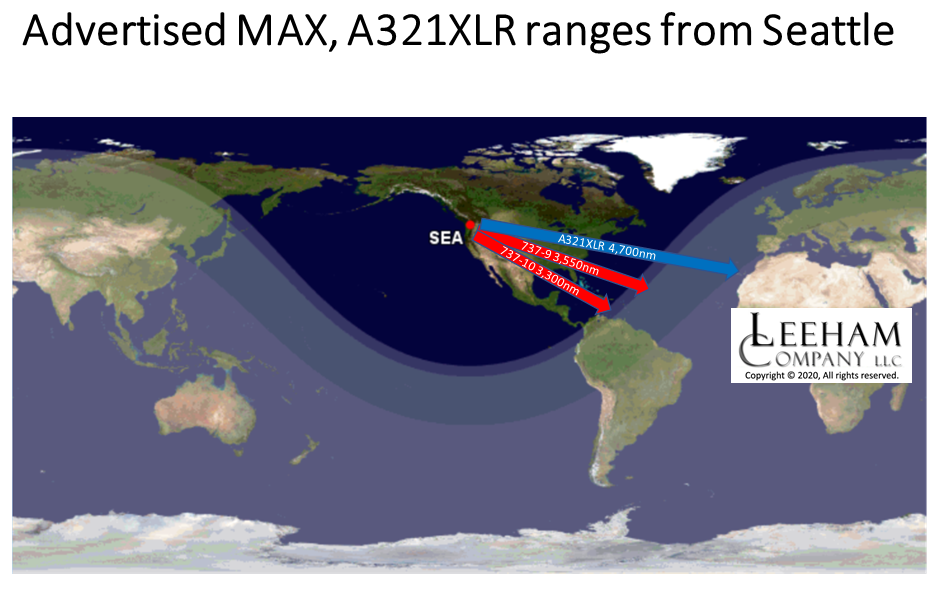 On Twitter over the weekend, debate focused on Europe from Alaska’s Seattle hub and Asia from the airline’s Anchorage hub. The latter, it was suggested elsewhere, could replicate Iceland as a midway point between the US and Asia.

Figure 1 shows the advertised ranges of the three airplanes from Seattle. The MAXes can’t reach Europe or Asia (except Siberia). The airplanes barely cover Central America.

The A321XLR, however, can reach the northern third of South America. It can also reach Japan and the UK. (All this is theoretically, once again discounting winds, holding and alternates.)

LNA sees little interest in trying for Asia or the UK from Seattle. However, new, non-stop service to Central and northern South America from Seattle is well within the capability of the A321XLR.

Long, thin routes with limited demand are perfect for the A321XLR.

The A321XLR outperforms the MAX 9/10 from Los Angeles. The latter touch the far north of South America. The A321XLR can reach about half the continent. 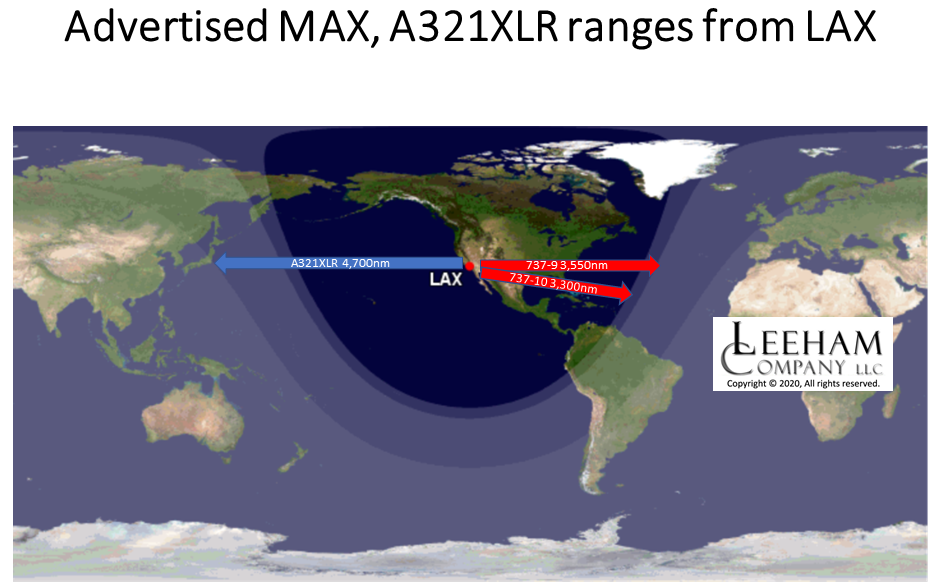 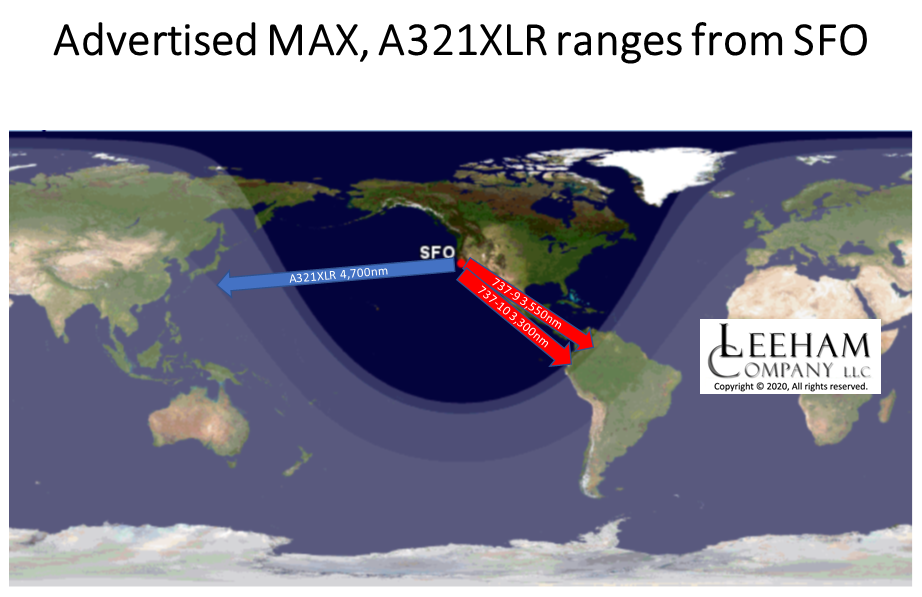 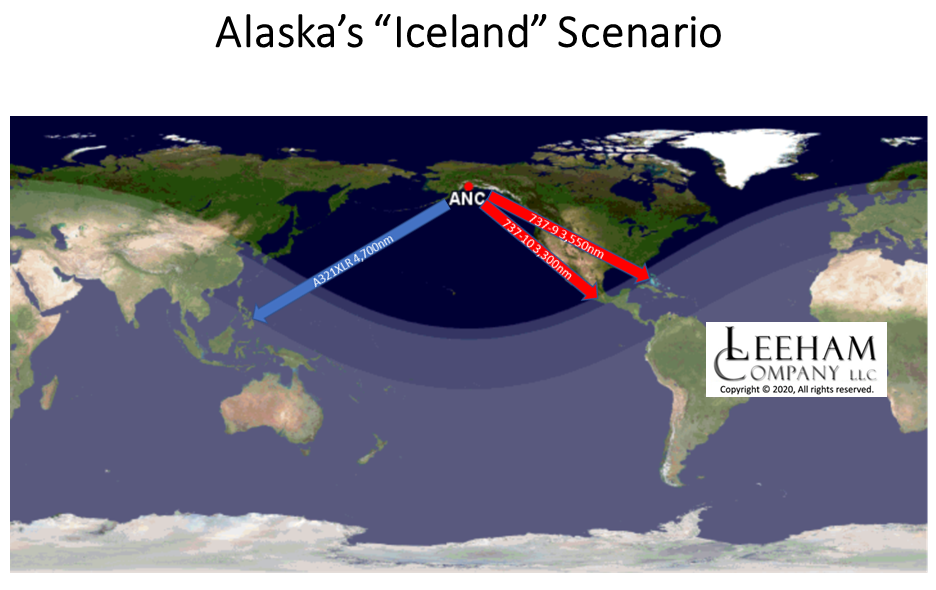 If Alaska pursued the “Iceland” scenario, much of Asia would be within reach of the A321XLR. There is no non-stop service between Anchorage and Tokyo (or anywhere else in Japan) or Korea, for example. Non-stop service from Anchorage as far south as Central America is possible.

Alaska has non-stop service to Anchorage from several mainland US cities, so connecting or through service is certainly possible.

Whether Alaska could replicate the business model of Icelandair is another question. But this is beyond the scope of this article.

Not that this is remotely likely, as it would be way outside Alaska’s scope, but the A321XLR opens much of the South Pacific to through traffic from Honolulu. Alaska could, if it chose, provide service from most of the US mainland to Hawaii. The airline has a fair amount of service there from the West Coast and Alaska. 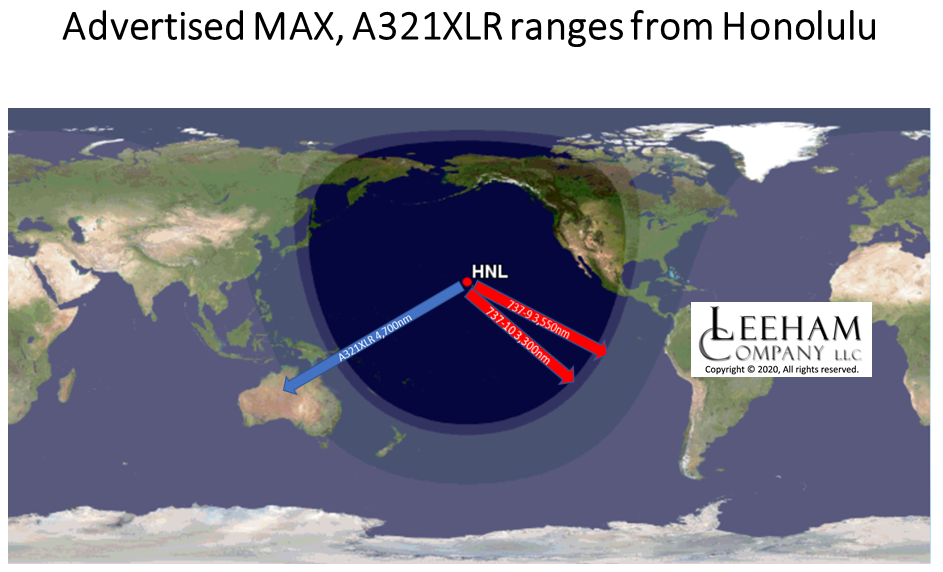 As noted in the weekend discussion, the MAX 9 and MAX 10 can reach any destination on the current route system. (The MAX 10 would be a stretch to Hawaii.) If Alaska wants to stay focused on the US and Mexico, these planes will work well.

But if officials have ambition to Central and South America routes, or beefing up service to Anchorage, the A321XLR is the plane to choose. It all depends on how “aggressive” they want to be.

Mainline Alaska has been an all-Boeing carrier since retiring the McDonnell Douglas MD-80s in 2008. (Yes, the MD was a Boeing airplane by then through the 1997 merger with McDonnell Douglas. But for purposes of this article, this doesn’t count.)

CEO Brad Tilden is a “Boeing brat.” Ray Conner, the former CEO of Boeing Commercial Airplanes, is on the Alaska Board of Directors.

But LNA’s sources say officials really like the A321neos. They perform well. LNA is told they wish the name on the airplane was Boeing. But there is a real shot that Alaska may choose to keep the A321neos and up the order.

It all comes down to what “aggressively” grow over the next 10 years means.

← Bjorn’s Corner: Why e in ePlane shall stand for environment, Part 10. The problem in perspective.
Pontifications: EU appears to be holding Boeing-Embraer JV hostage →

70 Comments on “Why the A321XLR makes sense for Alaska Airlines”