April 29, 2022, ©. Leeham News: Last week, we looked at the thrust generating device that aircraft propulsion systems use. We could conclude that independent of how we create the shaft power, we can choose different thrust technologies with desired characteristics. A propeller, open fan, or fan in nacelle covers different speed ranges and efficiency profiles.

Now we look at how we generate the shaft power for these devices. We start with the hydrogen-burning gas turbine alternative. 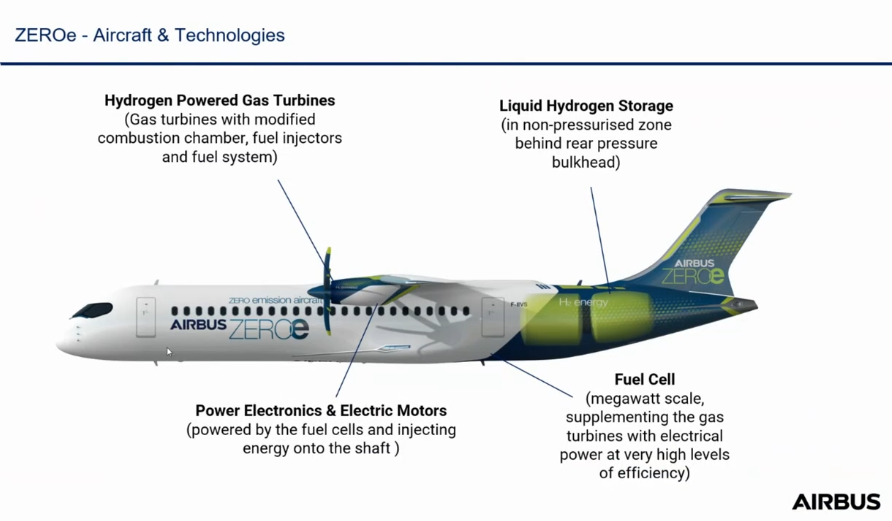 The Gas Turbine alternative has a Fuel Cell

Figure 1 shows one of Airbus’ ZEROe airliner concepts. It relies on hydrogen-burning gas turbines to generate the shaft power for its propellers. Observe that it also has a fuel cell installed.

Once an aircraft has hydrogen as fuel, the first that happens is the gas turbine APU disappears. It’s designed to be simple, light, and small, as it’s only used to give the aircraft power during ground stops for cabin conditioning and supply of systems. It’s also used to start the main engines.

The simple design makes it noisy and inefficient. The efficiency is around 20% for APUs, which is very low. Thus it’s not used during flight other than as a power backup during takeoff and landing. As it’s noisy, it’s placed in the aircraft tail, far away from power consumers. It makes for long power conduits in the aircraft.

A hydrogen fuel cell is ideal for replacing the APU to deliver electric power and heat during the cold season. It’s quiet, reliable, and has twice the efficiency of the gas turbine APU. It makes a placement close to the consumers possible, in the middle of the aircraft.

It can be sized as an auxiliary power source like the APU but also scaled up to help the main gas turbines run more efficiently. How we describe in the next Corner.

We have learned that gas turbines can use hydrogen as fuel. It’s injected into the combustion chamber in gas form through modified injectors, burning at leaner mixture ratios than kerosene, Figure 2. 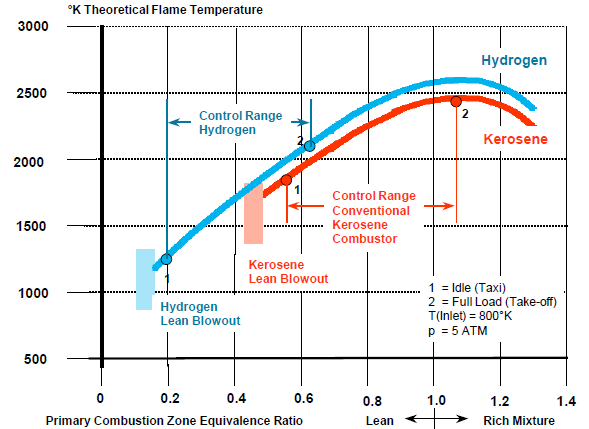 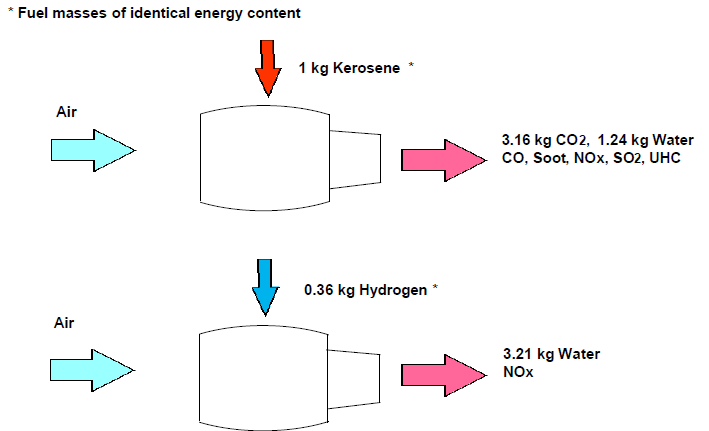 The above results in a cleaner gas turbine, emitting no CO2 or CO emissions, no soot, and about five times lower NOx emissions.

As previously discussed, the issue is the increased content of water vapor, where it’s not clear how large a problem this can cause. Because the exhaust contains few condensation nuclei, the formed ice crystals that build contrails will be larger and fewer.

We will need flight trials to know precisely how big a problem this is and the ways dangerous contrails can be avoided (by e.g., altitude changes) or mitigated (by engine changes).

As we discuss advanced ideas around hydrogen gas turbines in the next Corner, we will look at new ideas around water vapor emissions.

With a straight conversion, the hydrogen gas turbine has the same efficiency as today’s Jet-A1 or SAF burning versions. With liquid hydrogen onboard, there are several possibilities to do a more advanced engine,  both in environmental compatibility and efficiency. We look at these in the next Corner.

The advantages of the gas turbine shaft power alternative are:

The drawback is an industry drawback. The 80 years of gas turbine experience for airliners is concentrated in a handful of OEMs. For these to convert existing engines to hydrogen is a modest job. But the development of an H2 gas turbine in a new power class (up or down) is the same billion-dollar project as for today’s engines. The industry is constrained to working with the existing OEMs for the gas turbine alternative.

A fuel cell plus electric motor alternative lowers the barrier for conceiving new propulsion alternatives, as we will see in coming Corners. It does this while presenting its unique problems, however.