Paris Air Show: Qatar and others

announced whether it will provide an aerial display as it has at previous air shows, but Qatar may well have more airliners there than Airbus or Boeing.

As for manufacturers other than Airbus and Boeing, we don’t expect anything of consequence from these.

END_OF_DOCUMENT_TOKEN_TO_BE_REPLACED

May 25, 2015, c. Leeham Co. The Paris Air Show this year isn’t expected to be a big venue for orders from Airbus, Boeing and Bombardier (although since ouir Airbus Preview, an official now says there will be a “significant number” of orders at the PAS).

Embraer isn’t expected to do much out of the ordinary. One of what we call the Big Four Airframe OEMs, EMB’s priority this year is garnering orders for the E-Jet E1 to fill out the production gap to the E2.

END_OF_DOCUMENT_TOKEN_TO_BE_REPLACED

In 2009, there was wide anticipation at the Paris Air Show that BBD would announce a deal with Qatar Airways for 20 CS300s. The contract was ready. Instead, Qatar ordered a combination of Airbus A319/320neos after the French government pressured the Qatari government to avoid giving the CS300 a major boost on French soil. Given how persnickety Qatar Airways CEO Akbar Al Baker later proved to be with Airbus, Boeing and Pratt & Whitney, Bombardier is probably lucky this deal collapsed.

But subsequent air shows proved no better for BBD. Expectations arose and were inevitably dashed.

One reason: under Canadian law, orders and even letters of intent and MOUs must be announced within 24 hours. But BBD just couldn’t seem to make a sale. We’ve written several times about circumstances that went beyond BBD’s ability to control events, but clearly there was something more fundamentally wrong that this year, at long last, is being addressed through executive changes and corporate restructuring.

What does this mean for BBD at the Paris Air Show this year?

END_OF_DOCUMENT_TOKEN_TO_BE_REPLACED

Second in a Series of Previews for the Paris Air Show.

May 10, 2015, c. Leeham Co. Don’t expect Boeing to come away from the Paris Air Show next month with a ton of orders. It never does; this is Airbus’ home turf.

relations value and at the behest of customers. Is this as aggressive as Airbus? No, but we know from talking with customers and with

Boeing’s own personnel that Boeing is just as aware of the air show PR value as is Airbus.

That being said, what can we expect from Boeing at the air show? A little bit here. A little bit there. But not a whole lot. The order cycle has flattened (though it’s certainly not collapsed) and the wide-body campaigns that are underway probably won’t be ready for Paris.

END_OF_DOCUMENT_TOKEN_TO_BE_REPLACED

Looking ahead in 2015 in commercial aviation

Here’s a visualization of events to look for in commercial aviation in 2015. 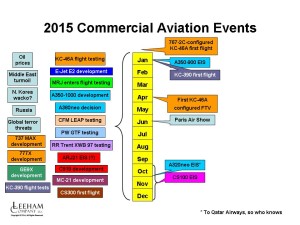 Airbus will “win” the air show: We did this preview for CNN International.

Jim McNerney Interview: Aviation Week has this long one.

Dominic Gates of The Seattle Times will be blogging from the Paris Air Show. You can follow him here. He has several reports worth reading.

Meantime, he reports that the Boeing 787-10 may be built in South Carolina, not Boeing’s main plant at Everett.

NYC Aviation has an interesting pilot perspective on flying the Boeing 747-400F and the 747-8F.