According to the news reports, Airbus is concerned about the diversion of engineering resources. Maybe this is why. Airbus is studying a “mega-twin” concept, reports Aviation Week. Of particular note is the reference that Airbus doesn’t plan to launch a new airplane in the next 10 years. We think these plans are going to have to change when Boeing launches a replacement for the 757, followed by the 737RS, which we have for the end of this decade.

But let’s get back to ATR.

Bombardier, the world’s #2 turbo-prop airliner producer, launched a high-density, 86-seat version of its venerable Q400 last year. China is going forward with a 90-seat turbo-prop and India is also interested in joining the fray.

ATR currently holds a 59% share of the future orders, options and Letters of Intents backlog. 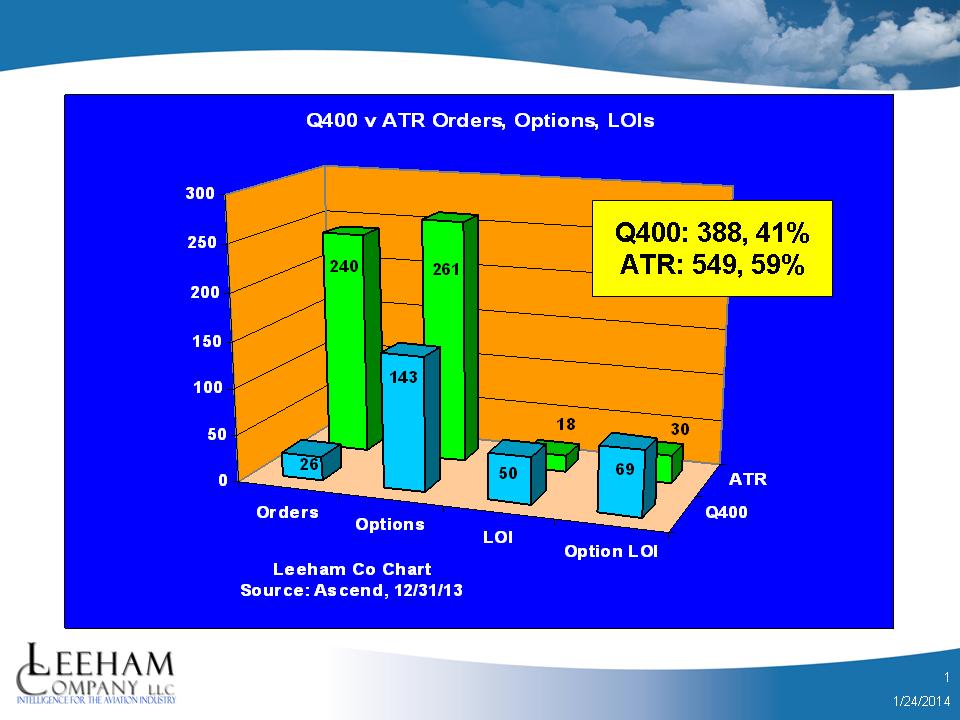 Bombardier made some significant progress last year, signing large LOIs with Russia for 100 and with China. These should be converted to firm orders this year, but even so, ATR has a lopsided market lead.

Boeing Stratoliner: Boeing has a short profile of the B307 Stratoliner, the first pressurized airliner. It’s the 75th anniversary of this important airliner. The last surviving example is on display at the Steven Udvar-Hazy Museum at Washington Dulles Airport.

Boeing 777 model: It’s been over the Internet already but in case you’ve missed this, a 1/60th, highly detailed model of the Boeing 777 was carved out of manila folders. This is an amazing piece of artistry.

Bombardier scored a huge deal at the Russian air show, MAKS, with a letter of intent for an order for up to 100 Q400 turbo-props.

The Q400 has been trailing rival ATR, which is half owned by Airbus parent EADS, for the ATR-72 turbo-prop, by a wide margin in recent sales. ATR recently obtained third-world, gravel runway certification for its airplane.

The BBD deal includes the potential of establishing a second Q400 assembly line in Russia. The BBD deal is for 50+50 and isn’t expected to be completed until next year.

Bombardier has been making a major effort in Russia, placing used CRJ regional jets there, previous orders for the Q400 and an order for 32 CSeries. It’s also signed an agreement to explore customer support services for the Irkut MC-21 150-212 seat mainline jet.

END_OF_DOCUMENT_TOKEN_TO_BE_REPLACED

Demand for A380 this year shrinks.

Airbus in Mobile: We doubt Boeing is really Sleepless in Seattle but this piece is pretty amusing.

Take that, Part 1: Boeing continues to whine about WTO.

Here are a few final thoughts in advance of the Farnborough Air Show: END_OF_DOCUMENT_TOKEN_TO_BE_REPLACED

A320 v 737 Debate: This continues over at AeroTurboPower, where an analysis of fuel burn cost per seat has been undertaken.

Embraer reiterates futures plans: No plane in the 130-160 market segment. EMB will continue to concentrate on its 70-125 seat market.

Odds and Ends: Taking airplanes in on trade; Q400 scores

Taking airplanes in on trade: Much is being made of Boeing taking five Airbus A340-600s in on trade to secure an order for 20 777-300ERs from China Eastern. While trade-ins are not common, neither are they unknown. Boeing has done this before, including what was then a particularly controversial deal: taking brand-new A340s off the hands of Singapore Airlines even before they had been delivered as part of a 777 deal. Those A340-300s went straight to Boeing from Airbus, much to the consternation of John Leahy at the time.

The OEMs don’t like to take airplanes in on trade; after all, they are in the business of selling new airplanes, not used ones, but Airbus, Boeing and Bombardier all have active used airplane units to remarket aircraft they have in their own portfolios–usually originating from their customer financing.

Bombardier wins Q400 deal: WestJet of Canada will order 20 Q400s and option 25 more in what was a hotly contested deal between ATR and Bombardier. Although many believe this was a slam-dunk for Bombardier, the competition was intense; WestJet sent the parties back to re-price the deal late in the game.

Outsourcing is a sore point for Boeing’s unions. While Boeing says it does so to reduce costs and to offset work in exchange for sales, there is a larger issue: the US simply doesn’t produce enough engineers to meet demand, and 50% of Boeing’s engineers reach retirement age in the next five years or so. We don’t like Boeing using Russian or Chinese help to produce airplanes–after all, these two countries are developing competitors to Boeing aircraft and it strikes us as pretty silly to help your competitor (why not hire French or German engineers, for Pete’s sake?). But the USA’s failure to place a high priority on developing engineers is a national disgrace and Boeing has to find the help where it can get it.

The final panel at the ISTAT meeting is the much-anticipated lessors’ panel consisting of:

Norman Liu, CEO of GECAS; and

HC: All hell broke loose in Europe and upended aviation. Looking at consolidation in Europe. America now had a lot of stability and discipline, and we’ll see that happen in Europe. More fuel efficient aircraft will be required in Europe. I see a lot of opportunity and challenges to come in Europe.

NL: Asia has been by far our most active market, with 70% of our airplanes going there. You have to look at different parts of Asia–you can’t generalize. LCCs in Japan. Always something going on in China. SE Asia, good organic growth. Philippines and Indonesia very interesting. South Asia has had travails.
SUH: North America is going through an interesting time. Canada is a duopoly situation with new Asian and Middle Eastern carriers entering the market. The US is very mature having gone through a lot of trial and tribulation, more disciplined [than before]. After 9/11 there was a slow-down in US carriers taking new airplanes. We have a bow wave of a requirement for new fleeting.
RS: Latin America is under-appreciated. We see rapid growth there. By 2015 may be 17%, 20% of our fleet. There is a remarkable amount of demand and opportunities for lessors.
END_OF_DOCUMENT_TOKEN_TO_BE_REPLACED