Aug. 8, 2016, © Leeham Co.: The book:bill for Airbus and Boeing this year will be hard-pressed to reach one. Airbus has a better shot, given lower production rates. But the recent years of record-setting orders are over for now.

Unlike some, this doesn’t represent a bursting bubble to LNC. Rather, it’s a natural progression of the cycles that are historically seen.

It’s necessary to put some context into the recent years of these unprecedented number of orders.

Serving as the backdrop for the pace of orders was the development worldwide of 12 new and significant derivative airplanes in 10 years. There was also launch by Airbus of the A350-ULR and the A321LR, minor derivatives of their respective families.

None of this counts the basic family subtypes of many of these models. 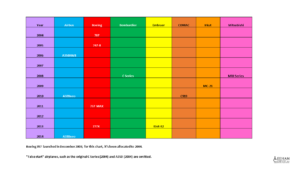 It was the dawn of the jet age in 1954 (after the de Havilland Comet’s unfortunate disasters) with orders from Pan American World Airways that set off a splurge of development. There were 10 mainline aircraft designed, from the Boeing 707 and Douglas DC-8 to the DC-9 in 1963. The Lockheed Electra and Vickers Vanguard prop-jets are included in this accounting (though neither was successful). Small turbo-props like the Fokker F-27 and YS-11 are not. The Soviet bloc aircraft are also excluded.

(The Boeing 737 program was launched in 1965, the start of the next development cycle.)

With fuel prices spiking to what was then an unprecedented $40/bbl, Boeing launched the 7E7 in December 2003. Airbus responded with the first version of the A350, which was a heavily redesigned A330.

Neither airplane sold well in the first year. The Boeing, eventually named the 787, saw only 54 sales in 2004. The original A350 program launch followed in 2005, but met with tepid market response. A redesigned A350 XWB followed the next year.

By now, fuel prices were heading up dramatically, eventually reaching about $120/bbl in 2010. Thus it was natural airlines wanted more fuel efficient narrow-bodied aircraft as well.

Bombardier’s 2008-version of the C Series was a game-changing aircraft. An all-new design with a new engine won some key orders that prompted Airbus to offer the re-engined A320neo. Boeing responded with the 737 MAX.

Embraer developed the EJet-E2, which is markets as a new design though its antecedents are clearly from what is now called the E1.

With the high-fuel price environment, new technology engines and new engines, a burst of orders had to be expected.

Equally, as the backlogs got bigger and delivery dates farther out in the future, it was inevitable that the order cycle would peak. And it has.

The industry is now on the downward side of the bell curve of the cycle.

There currently is the near-term prospect of only one brand-new aircraft development program: the Boeing New Mid-range Aircraft, or NMA, for the Middle of the Market sector. If Boeing launches this program, perhaps next year, Airbus may feel compelled to launch a new-design response. At the moment, the NMA is hardly a given.

Boeing is considering another 737 derivative, the MAX 10. Airbus has a response ready if needed.

But the next five years are not going be as exciting as the last five. So orders aren’t likely to spike sharply any time soon.