06 October 2015, ©. Leeham Co: The global airline industry is on a steady course as a whole, but there are dramatic changes within Europe as low cost carriers, plus Turkish Airlines, redraw the competitive landscape.

China’s current economic softness raises concerns, with an independent analysis concluding that economic growth here is 2%-3% instead of the announced rate of 7%-8%.

Still, the mixed messages given at the annual ISTAT meeting in Europe this week didn’t put a damper on the mood of 1,200 delegates here in Prague.

END_OF_DOCUMENT_TOKEN_TO_BE_REPLACED

Airbus gearing toward 63 A320s per month; Boeing sure to follow

Oct. 5, 2015, © Leeham Co. Airbus appears to be closing in on a decision to boost the production rate of the A320 family to 63/mo by the end of the decade, a new report from Bernstein Research Group says.

Boeing is sure to follow with rate boosts for the 737, Bernstein writes in an Oct. 1 note.

Leeham Co. has been predicting these moves all year, and in LNC’s interview with Airbus Group CEO Tom Enders last month at the opening of the A320 Final Assembly Line (FAL) in Mobile (AL), Enders indicated the decision to boost rates would be made by the end of the year.

END_OF_DOCUMENT_TOKEN_TO_BE_REPLACED

Sept. 30, 2015, (c) Leeham Co.: The Boeing deals announced last week with China put the country into the spotlight about its commercial aviation ambitions.

For many, the various deals announced by Boeing raise alarm bells. For most, that fire horse already left the fire station. The smoke has been billowing out of China (or maybe that’s smog) for a long, long time.

END_OF_DOCUMENT_TOKEN_TO_BE_REPLACED

Pontifications: Boeing moves in China only the beginning

Sept. 28, 2015, (c) Leeham Co.:The move by Boeing to establish a 737 Completion Center in China is only one step in a series of moves to increase its footprint there.

“Boeing and Aviation Industry Corp. of China (AVIC) will broaden their long-term collaboration to support Boeing’s commercial airplane programs,” the company announced last week in connection with the visit to Seattle by the president of China. “In a framework agreement, the companies said they intend to further advance AVIC’s manufacturing capabilities by adding major component and assembly work packages; strengthening leadership; and developing AVIC’s broad aviation infrastructure and business practices, including supply chain management.”

I believe this is only the beginning of a new push of Boeing’s expansion outside Washington State, elsewhere in the US and overseas.

Separately, last week it was also announced that a key supplier is done expanding in Washington State. Future expansion will be elsewhere.

END_OF_DOCUMENT_TOKEN_TO_BE_REPLACED

Boeing announces big China order–but how big is it, really?

Sept. 24, 2015, (c) Leeham Co. Boeing yesterday announced a deal pegged at $38bn for 300 jets for China, timing the announcement with the State visit to Seattle of Chinese President Xi Jinping.

Boeing and China Aviation Supplies Holding Company (CASC) have signed a General Terms Agreement related to the purchase of 300 airplanes. The package has a value of approximately $38 billion at list prices.

Aircraft orders and commitments include:

“Boeing airplanes have played an important role in supporting the development of China’s aviation transportation for the past 40 years,” said Li Hai, president of China Aviation Supplies Holding Company. “These additional airplanes will further help connect the people in China and around the world.”

“China is a critical international market for commercial airplanes,” said Conner. “We thank our Chinese customers for selecting fuel-efficient Boeing airplanes to meet their fleet growth and expansion.”

But the information above is remarkably vague on detail. Questions immediately arose on Wall Street over just how big this deal truly is.

END_OF_DOCUMENT_TOKEN_TO_BE_REPLACED

Sept. 22, 2015, © Leeham Co. The expected announcement by Boeing and Chinese President Xi during

his state visit to Seattle this week that Boeing will develop a Completion Center for the 737 in China is a significant event that may one day lead to an assembly line there.

Boeing’s touch labor union, the IAM 751, was predictably critical. In a post on the 751 website last week, the union said, “In a previous meeting with Renton’s 737 leadership we saw a brief presentation outlining Boeing’s perceived market conditions regarding sales of single aisle aircraft and the company’s desire to collaborate with China. We have asked the Company for details of what is intended with “collaboration” and have not received ANY information on “collaboration” or confirming or disputing the media reports. While we don’t know specifics of any such proposal, ANY shift of aerospace jobs from our bargaining unit or Washington State causes grave concern.”

END_OF_DOCUMENT_TOKEN_TO_BE_REPLACED

Sept. 14, 2015, © Leeham Co. It’s only been three months since the Paris Air Show and there have been some significant developments in the world that have impact on commercial aviation:

We talked with Paulo Cesar, president and CEO of Embraer at the Paris Air Show on some of these topics. We caught up with him Sept. 2 in Seattle, revisiting these topics and talking about more.

END_OF_DOCUMENT_TOKEN_TO_BE_REPLACED

July 9, 2015, © Leeham Co. At the half way point of 2015, there are a number of signs emerging that require some interpretation. Some are signs of caution. Others are Go Slow.

END_OF_DOCUMENT_TOKEN_TO_BE_REPLACED 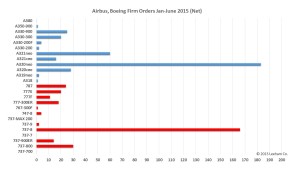 Update, July 8: In our original post, we omitted 44 Boeing 737NGs from the YTD firm orders. The charts and text have been updated to reflect this information.

July 7, 2015, © Leeham Co. Airbus pulled ahead of Boeing in firm orders through June, and both companies have a number of commitments that were announced at the Paris Air Show that aren’t included in the year-to-date tally.

Airbus leads with single-aisle orders and Boeing leads with widebody orders, but at the half-way point of the year, the contest is far from over. The leads could shift or increase, depending on how the balance of the year goes.