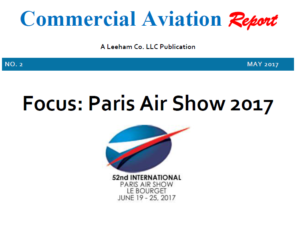 Airbus guides that it will tough to achieve a 1:1 book:bill this year. Boeing is running about 1:1 book:bill so far but it also guides conservatively. Still, LNC thinks Boeing might surprise this year–and some of this could be at the Paris Air Show.

The pre-airshow press briefings by the OEMs begin next week. We don’t expect any earth-shattering news from these and we wanted to get our views out ahead of these briefings.

END_OF_DOCUMENT_TOKEN_TO_BE_REPLACED 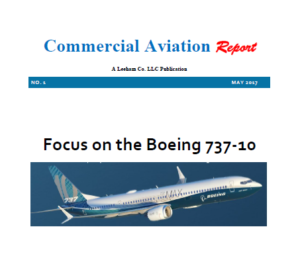 Today Leeham Co. is re-launching the publication that became the foundation of an international publishing and conference company and which ultimately led to the creation of Leeham Co. and Leeham News and Comment.

Commercial Aviation Report, or CAR for short, was launched Oct. 1, 1989, by Scott Hamilton, Chris Kjelgaard and Bernard Tilbury. The bi-weekly newsletter evolved into a magazine and later the creation of a monthly, Commercial Aviation Value Report.

END_OF_DOCUMENT_TOKEN_TO_BE_REPLACED

There was the “soft launch” of the airplane at the March 2017 ISTAT conference in San Diego.

The Paris Air Show is around the corner. It’s next month, and Boeing officials want to launch the program there.

In a Special Report, Leeham Co. LLC is re-launching the magazine that was the foundation of the creation of Leeham Co. and Leeham News and Comment. The magazine, Commercial Aviation Report, or CAR for short, takes an in-depth look at the 737-10, its genesis and its competitive position against the Airbus A321neo.