The Wall Street Journal Tuesday (July 8th) had an interesting piece about how the current high cost of fuel is adversely impacting the super long-haul flights.

The article is silent about the economics of the 8,000nm range A380 and its ability to carry more than 500 passengers, supplying the revenue for the super long-haul route.

Airbus and Boeing are virtually tied in year-to-date net orders, a position that is likely to change with next week’s Farnborough Air Show when both manufacturers may announce stronger-than-expected orders.

Boeing is handicapped by the fact that the 787 has serious program delays and as a result won’t deliver the last of the current orders of 900 until 2017 or 2020, depending on who you talk to. Thus, we’re told Boeing is currently not really offering the 787 for sale until the production rate stream becomes clear–a process that may take a couple of years. Airbus is limited in the ability to take advantage of this for the A350, which is also sold out to about 2017. There are more opportunities for the A330. Several lessors that ordered the A330F may switch early positions to the A330P and tack on an equal number of A330Fs to the back end of their orders. Some of these may be announced at Farnborough.

As for the 767, Boeing has yet to decide whether to up the production rate from the current one per month to 2 or 2 1/2 for airliners; and whether the oft-delayed USAF decision on the aerial tanker might be reversed, providing the need for even higher 767 rates.

There was no change in the Very Large Aircraft category from May: Boeing has sold two 747-8s to three A380s YTD.

US Sen Patty Murray (D-WA), the most vocal critic of the USAF contract award to Northrop Grumman for the KC-45A, struck out in her request to have the US Commerce Department shoot down the Northrop claims of 48,000 jobs for the program. This compares with the 44,000 jobs claimed by Boeing for the KC-767.

Murray, along with Sen. Maria Cantwell (D-WA) and two other Senators, wrote Commerce on May 9 asking the Department to confirm–or debunk–Northrop’s claim of 48,000 jobs. The Senators correctly noted that Northrop claimed 25,000 jobs prior to the February 29 contract announcement and upped this a few weeks later, after the award, to 48,000 jobs.

Northrop, in our report, explained itself–something that Boeing never did–until a liberal think tank did a 15 page study we linked to in a previous report on this website. The think tank interviewed Boeing but not Northrop and came to the conclusion that both Boeing and Northrop overstated the jobs creation but that Northrop did a greater job of overstating than did Boeing.

Of all the jobs data we’ve seen, we tend to believe the think tank’s analysis more than any other, even if the report is open to criticism for failing to talk to Northrop.

That being said, Murray’s gambit to have Commerce debunk Northrop’s claim failed. Why is this significant? Because Murray has long challenged a 2003 Airbus claim that its US-sourced work supported 100,000 direct and indirect jobs. In 2003, Murray asked Commerce to verify the claim and, according to Murray, Commerce could not–inferring, if not outright suggesting, that Commerce studied the matter and could not confirm the Airbus claim.

The facts appear to be somewhat different.

In Murray’s May 9 letter, she refers to her 2003 inquiry of Commerce. Commerce, in its reply, acknowledges the 2003 inquiry and writes:

“As the Department stated in its 2003 letter…, estimates of the total job impact require a variety of assumptions about the direct and indirect impacts of production performed in the United States. Predicting the full impact…is extremely complicated…. Therefore, the Department of Commerce is not in a position to investigate the assumptions…especially when those claims are made in connection with the award of a US government contract by another Department.”

The correspondence between Murray and Commerce may be found here (Murray-Commerce), a three page PDF file.

Here is a 16 minute podcast with a preview of the Farnborough Air Show, which begins Monday.

The media campaign on both sides of the tanker debate continues as the US House of Representatives gears up to hold some hearings on the issue.

This item published in American Spectator is another in a series of op-ed pieces originating with the Center for Security Policy, which bills itself as a non-partisan think tank. The Center has consistently opposed the Northrop Grumman KC-30 in the competition and the subsequent award. None of the op-ed pieces has disclosed previous ties to Boeing. According to the 2005-2006 Annual Report (published every two years, so the 2007-2008 report isn’t out yet), a couple of Boeing officials served on the advisory boards to the Center. This taints the op-eds and the perceived independence of the Center. (Tanker War Blog is written by an employee of the Center, and while this blog doesn’t disclose the Boeing connection in its “About Us,” the blog has never made any pretense of objectivity.) The writings often have interesting and valid points–but the Center is not as independent as the image would have readers believe.

Human Events published this piece by former Gen. John Handy. Handy also supports the Boeing KC-767. It turns out that Handy’s name appears in a series of e-mails in connection with the 2002-2004 tanker scandal. He was one of many internal Air Force recipients copied on correspondence. The emails emerged when Sen. John McCain, now the presumptive Republican nominee for president, was investigating the first procurement.

Alabama Sen. Richard Shelby (R-Northrop) moved to block a bill introduced by several Members of Congress who are closely tied to Boeing that would all but guarantee a contract to Boeing. This item in The Mobile Press-Register explains the issue.

A 15 page study by the University of Buffalo raises concerns that technology transfer by Boeing to Japanese heavy industry, beginning with the 767 and peaking at the moment with the 787, sets up Japan’s emerging aerospace industry to become a serious rival.

The 787 production model has been a concern to the authors of the report since the 7E7 was announced in 2003. Furthermore, the Japanese government funding to the “heavies” is a violation of World Trade Organization rules, the authors report–to no small irony given Boeing’s complaints to the WTO about Airbus launch aid.

The paper is worth reading.

This satire is worth reading on the tanker debacle. 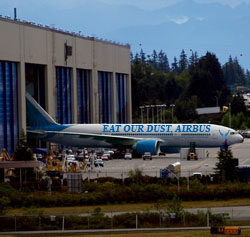 Innovation Analysis Group has a 15 minute podcast with Aviation Partners, which revealed that they are working on winglets for the Boeing 777–with a prediction that the product could be ready for installation within two years.

This follows the winglets for the Boeing 767, which Aviation Partners suggests will provide a 5%-7% fuel burn improvement.

If a similar improvement is made for the 777, this will close the gap between the 777 and the projected fuel savings for the Airbus A350. Airbus projects a 20 operating cost savings over the 777, although we recognize that the remaining 13%-15% advantage still is nothing to sneeze at.

Aviation Partners is also working with Airbus, though AP declined to discuss it. It’s known, however, that Airbus and AP are getting ready to test a winglet on the A320 family. AP did discuss the prospect of winglets for the A380–which would be 17 feet tall. The wingtip fences on the Airbus family are old technology, AP says.

The podcast may be found here.

Boeing has quietly been increasing the production rate of the 737 and has the capacity at its Renton plant to go to 40 a month–if the supply chain can perform. Boeing has been studying whether to go this high, which would match Airbus’ planned 2009 rate. There is a reluctance on the part of some to do so because of haunting memories of the 1997 737 production fiasco (though the current rate now exceeds the rate then), and also because of the emerging economic uncertainties.

But the 737 line is dramatically oversold in 2010, and Boeing is losing sales now because the line is essentially sold out to 2014. With a two year lead time required for suppliers to gear up, it would be mid-2010 before the production could be dramatically increased.

The 777 line average rate of six per month for 2Q08 is one less than the seven a month capacity of the Everett line. Boeing is offering the 777 as interim lift to accommodate airlines hurt by the 787 delays.

The 767 line, at one a month, has lots of room to grow if the supply chain is there to support it. But suppliers are pressed, running at full capacity serving Boeing and Airbus on other models. Increasing 767 parts production is problematic. Boeing has been thinking of going to 2-2.5 767s a month to support aggrieved 787 customers, and now with the uncertain prospect of winning some of all of the KC-X USAF tanker business, Boeing has some decisions to make. A full tanker award would be another 1-1.5 767s a month.

Reuters reports that the USAF skipped filing an appeal of the GAO decision in the tanker protest. This means it’s likely to follow the GAO recommendation to rebid the tanker. The question now is, what does “rebid” mean? Will this be a full re-compete, or a narrow recompete just on the points the GAO found fault with?

Update, 345PM PDT: Here’s an update to the Reuters story with much more information. This story, in CQ Politics, takes a look at the GAO, its history of protests, and what makes for a successful protest. Buried in this piece by Seattle Post-Intelligencer columnist Bill Virgin are some thoughts about foreign ownership issues for the tanker obscuring more relevant issues–like which airplane is better.

Update, Wednesday, July 1, 700 AM PDT: We missed this item dated June 27 from Defense Tech; it’s about a meeting between members of Congress, the GAO and the USAF over the tanker.

Flashback, February 29, 2008: Here’s the transcript of the USAF announcement of the contract to Northrop Grumman.

A non-partisan tanker cartoon generates from our favorite tanker cartoonist, JD Crowe from The Mobile Press-Register. He gives us this one that even Boeing people can appreciate.